To put it briefly, Euclidea is a game that every math student should have and, in an ideal world, every adult should like. 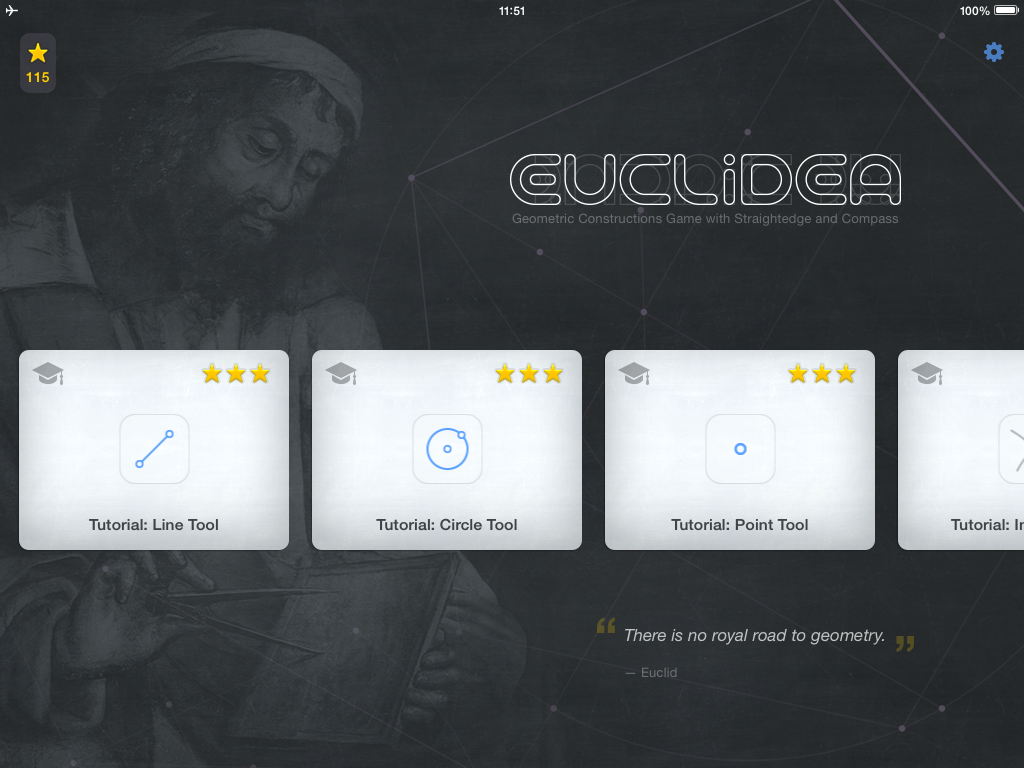 The game was developed by the Russian Horis International Limited, which seems to be specialising in apps with a strong maths background. Some time ago they also released Quick Route, a nice puzzle based on the Travelling Salesman Problem.

The concept isn't new; we have seen it for example in the browser game Euclid: The Game. However, the implementation in Euclidea is perfectly done, making it an absolute joy to play.

The idea of the game is to solve geometric problems by using compass and straightedge constructions. For example here you are asked to construct the perpendicular bisector to a segment. 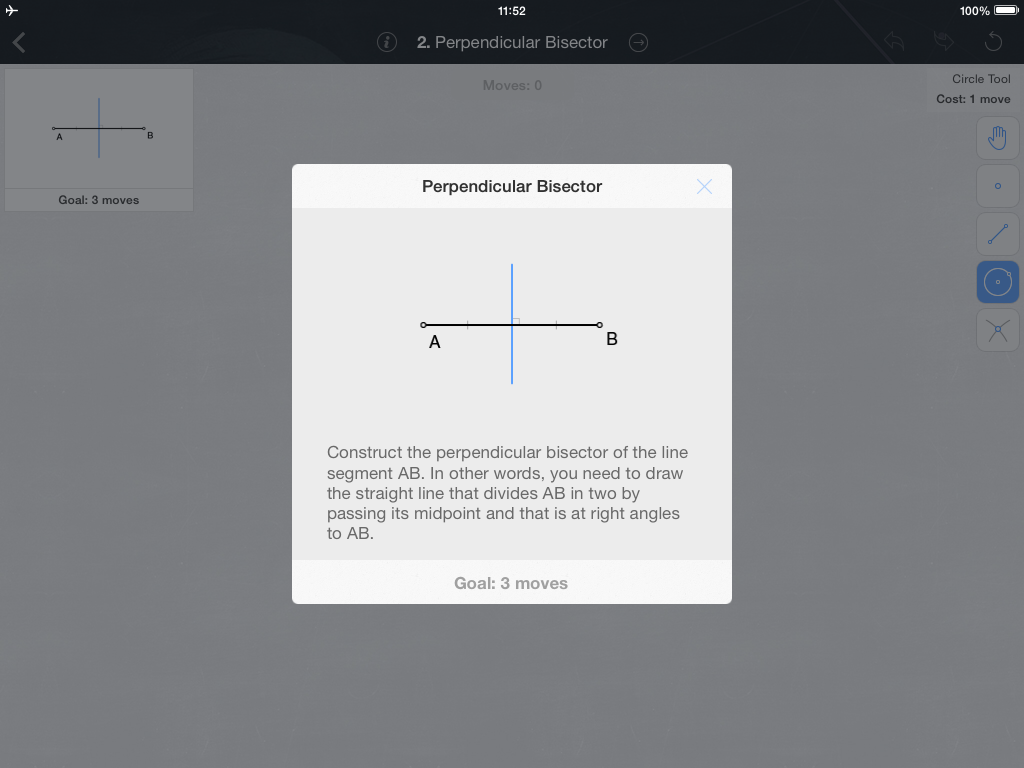 Most of these constructions are things that all of us should have done in school; however, at least in my case, they were thought more to learn how to follow instructions and use the drawing tools precisely, than to understand why the constructions worked.

In Euclidea, you are on your own, and have to figure out what to draw to reach the requested goal. The user interface works beautifully, and as you draw your circles and segments they precisely snap to the reference points nearby.

A brilliant feature, not found in other similar games, is that you can freely move all the arbitrary points in your constructions, to verify that they work in general. For example, here I constructed the bisector of an angle. 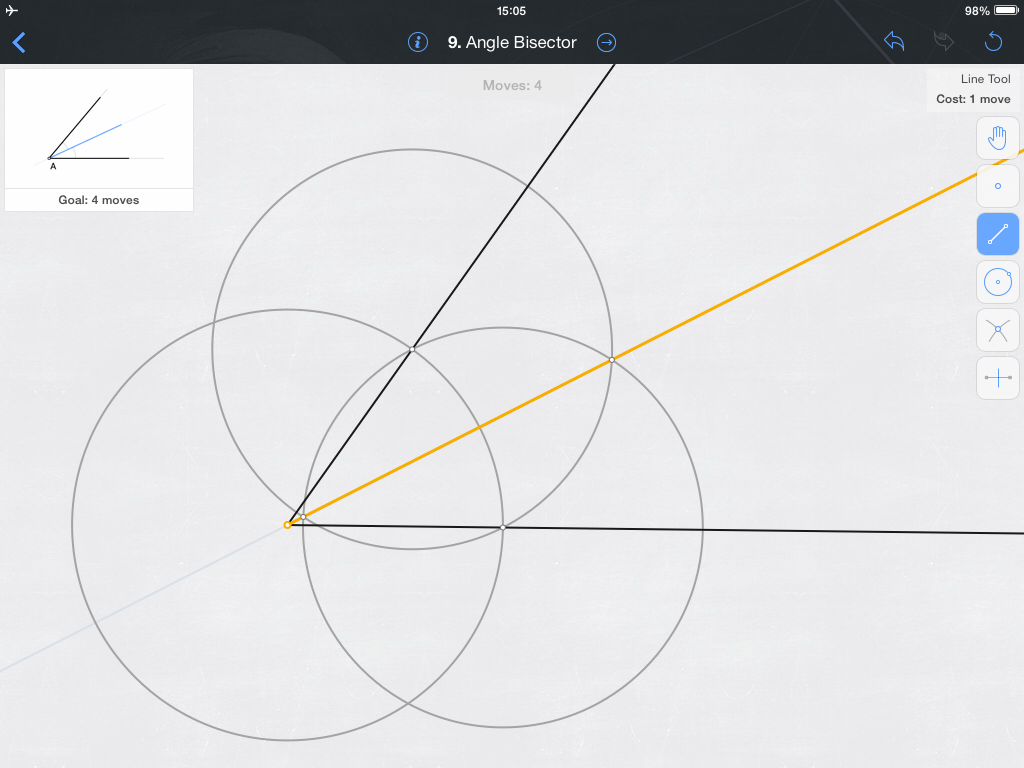 The game has already highlighted it in yellow, to indicate that my solution is correct. But I can make angle smaller... 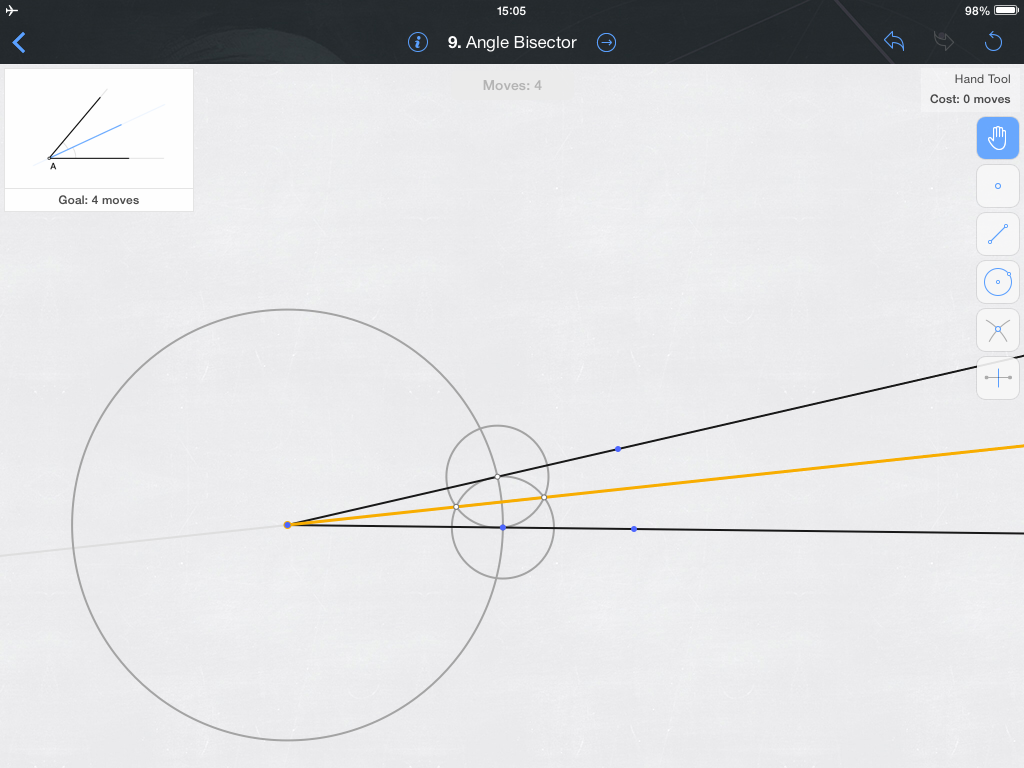 ... or larger, and see how the circles I constructed change accordingly. 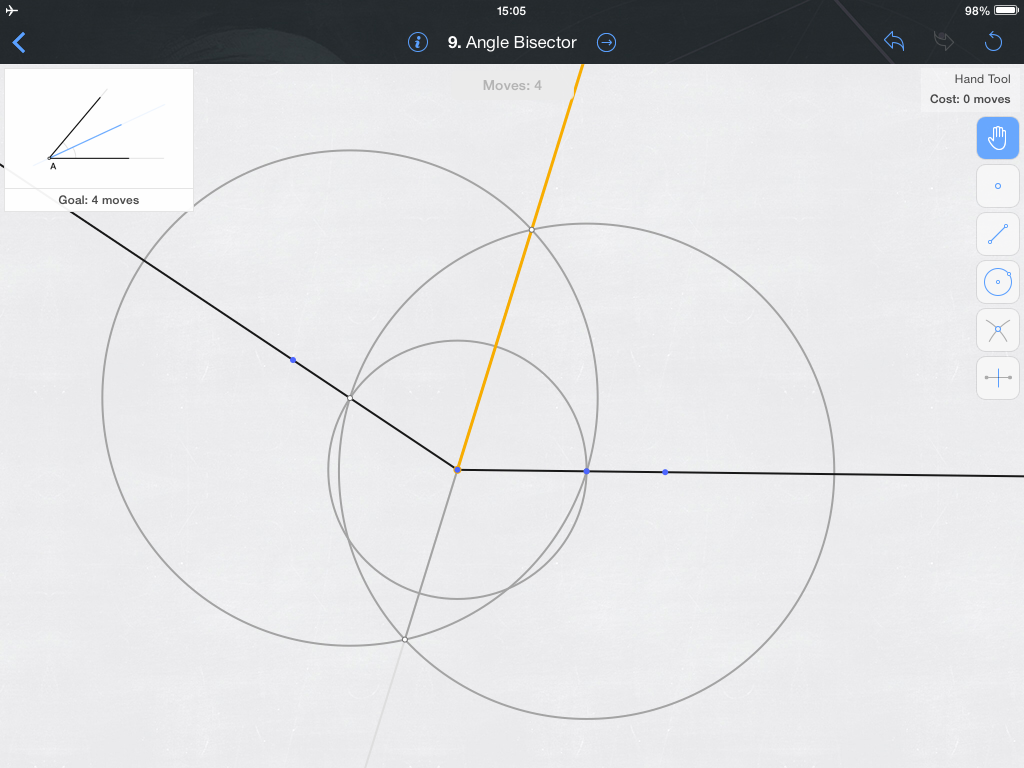 Some of the constructions you have to make are particularly significant, and after you do them they are added as shortcuts to the toolbox. For example you'll learn to draw a circle of given radius. This is equivalent to fixing the opening of the compass, something not directly allowed in pure compass and straightedge constructions. 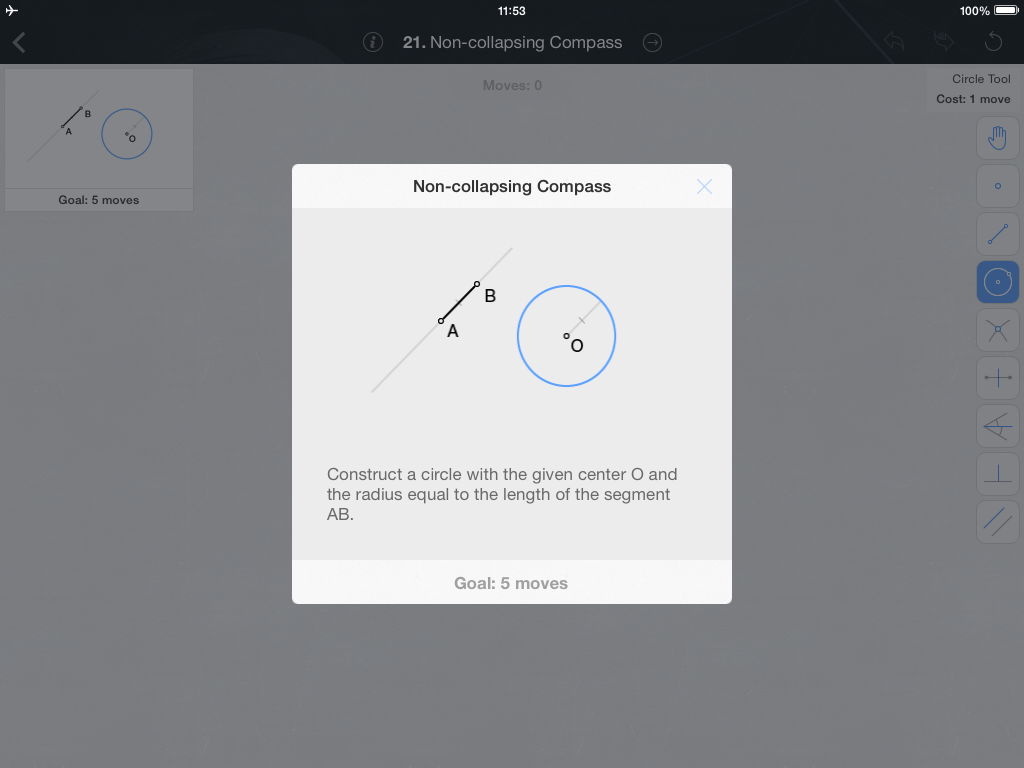 The additional tools are just shortcuts that allow you to make common operations without explicitly doing all the steps, but their cost is still computed considering all the fundamental steps (in the case above, 5 moves). This is important because the funniest part of the game is not just to solve the problems, but to do it in the optimal number of moves.

For example, one of the problems is to translate a segment. Using the parallel line tool, this is trivial to do: 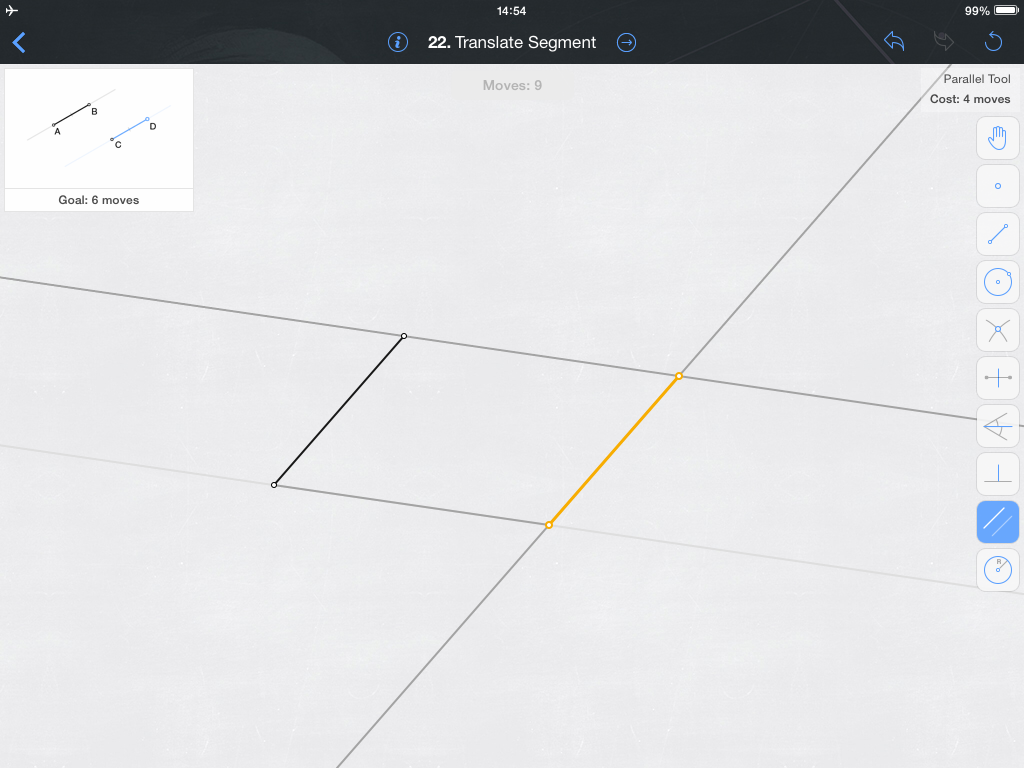 But with the parallel line costing 4 moves, this took us 9 moves. To do it in 6 moves as requested, we'll have to be more creative.

Some of the problems are even move restrictive, requiring to make constructions that use only the straightedge and not the compass, or the other way around. Those can be challenging. Find the instersection of a circle and a segment without drawing the segment? I haven't solved that one yet. 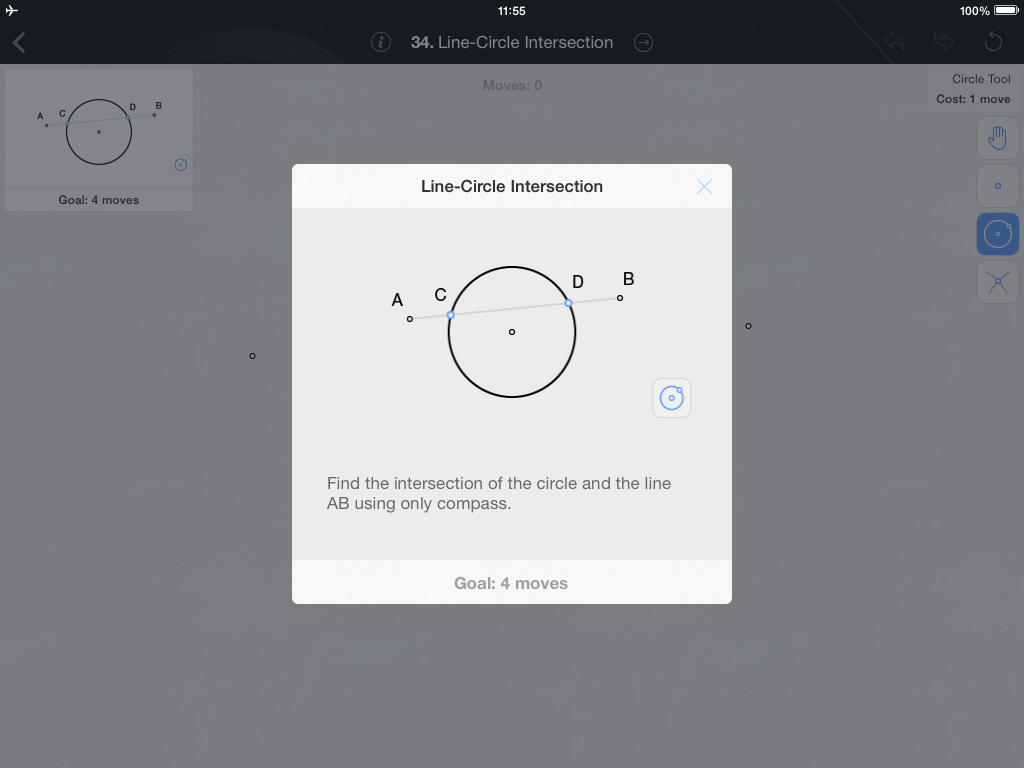 The game has been updated several times since the initial release and currently contains 36 challenges, plus some tutorials. Initially the levels must be solved in order, but after some point (I think after unlocking all the additional tools) everything is unlocked. The last few problems are not easy.

My main gripe is that the game doesn't store your constructions, so if you go back to a puzzle you played previously you have to start from scratch. I would have liked to be able to see my best effort, instead of having to reconstruct my steps every time.
I also don't like the horizontally scrolling list of puzzles, which is cumbersome to navigate and wastes a lot of space. A grid might have worked better.

But those are really minor things! The best part of all this is that the game is totally free, with an optional in-app purchase to turn off banner ads. It is so rare to see a game like this so well done, that I gladly made that purchase, hoping that the developers will continue to improve this gem.


©2014 Nicola Salmoria. Unauthorized use and/or duplication without express and written permission is strictly prohibited. Excerpts and links may be used, provided that full and clear credit is given to Nicola Salmoria and nontrivialgames.blogspot.com with appropriate and specific direction to the original content.
Posted by Nicola at 5:33 PM