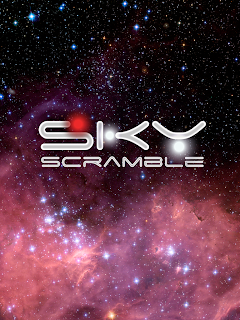 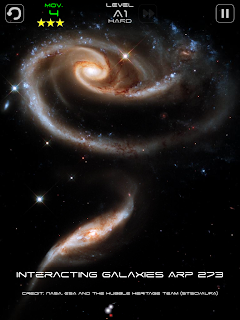 The puzzle mechanics are equally good. The playing area consists of a graph, where each node is occupied by a star of varying size. A move consists of swapping two adjacent stars; the goal is to move the red star to the red circle. 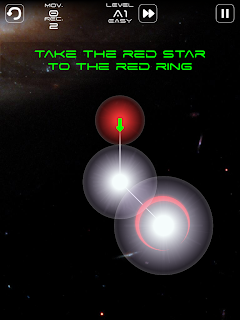 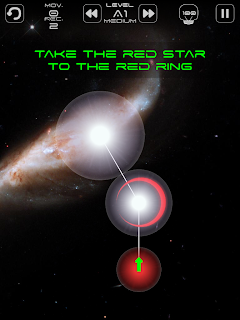 Solving the puzzles is interesting and somewhat reminds me of the Tower of Hanoi. Clearly the largest star is the one that needs to be moved the most, because it has higher chances of touching another star. The tricky part is rearranging the order of the other stars to let the red star progress towards the goal.

As usual (and particularly fitting in this case), the game gives you stars for solving the puzzles. You don't need to find the optimal solution to get three stars; for optimal solutions, you get an additional "Perfect" flag.

There's a total of 198 puzzles, split across 11 "clusters". Each cluster contains 6 groups of 3 puzzles, each one tied to a Hubble image. The first few puzzles are easy, but difficulty quickly increases, especially if you try to find the optimal solution.

An odd peculiarity, which will make sense in a moment, is that instead of progressing from easy to hard, if you play the puzzles in sequence you continuously cycle through Easy, Medium and Hard.
The puzzles are unlocked in sequence, but when you solve an Easy puzzle you also unlock the Easy puzzle in the next line, so you can skip the harder puzzles and still make progress. 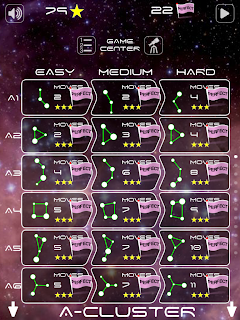 Looking at the image above, it becomes clear how much care has gone into the puzzle design.
This isn't immediately obvious, but the puzzles in every line are topologically equivalent, e.g. the puzzles in the A6 line all have the shape of a three-pointed star. What changes is the size of the stars, their relative distances, and the position of the red star and the goal; this significantly changes the number of moves needed, so you get an Easy, a Medium and a Hard variation.

The game is free to play, but to unlock new clusters you need a certain number of stars, and the ones you can get even if you play perfectly will only be enough to unlock the first five clusters. To unlock the others, you'll need to buy more stars through in-app purchases.

I like how the Game Center leaderboards have been implemented. There's one leaderboard for the number of puzzles you solved perfectly, and then a leaderboard for each cluster which counts the total number of moves. Simple and effective; I think I should borrow this idea for the next update of Brain Twirler.

Also, it's good that when you launch the game it automatically brings you to the last puzzle you were playing. Unfortunately, it doesn't store the moves you had made, so if you quit in the middle of a puzzle you have to restart from the beginning.

I was seriously impressed by this game. It is obvious that it was designed by people that had a clear vision of what they wanted to achieve. Definitely give it a try.


©2013 Nicola Salmoria. Unauthorized use and/or duplication without express and written permission is strictly prohibited. Excerpts and links may be used, provided that full and clear credit is given to Nicola Salmoria and nontrivialgames.blogspot.com with appropriate and specific direction to the original content.
Posted by Unknown at 4:43 PM