Einstein™ Enigma (yes, "Einstein" is a trademark) by the German BBG Entertainment is an old style sliding puzzle with a couple of new twists. 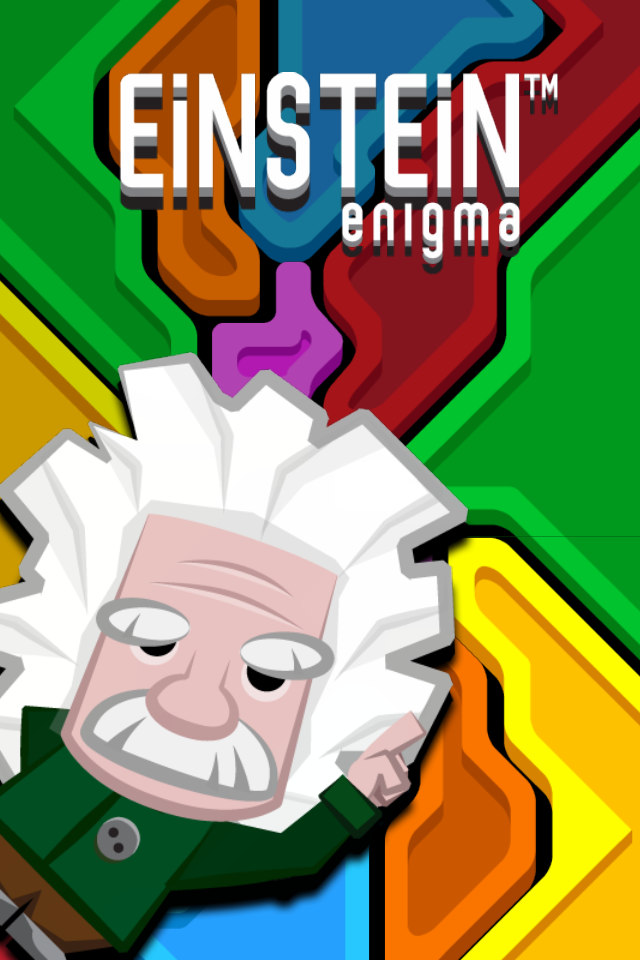 The App Store blurb boasts that the game was inspired by the Enigma machine, but don't believe that marketing fluff: it has nothing to do with that.

The basic idea is similar to physical puzzles like Circle Puzzle (which is much easier) or to other apps like Rynglets, but with a more intuitive user interface and a few novel mechanics that make it more varied.

The play area consists of 6 intersecting rings which can be rotated by multiples of 90 degrees. When you rotate a ring you turn not only the 4 arcs that form its perimeter, but also the 4 additional arcs inside, which are part of the perimeter of the neighboring rings.

At the center of the rings you can see your goal: the colors of each ring must match the goal. 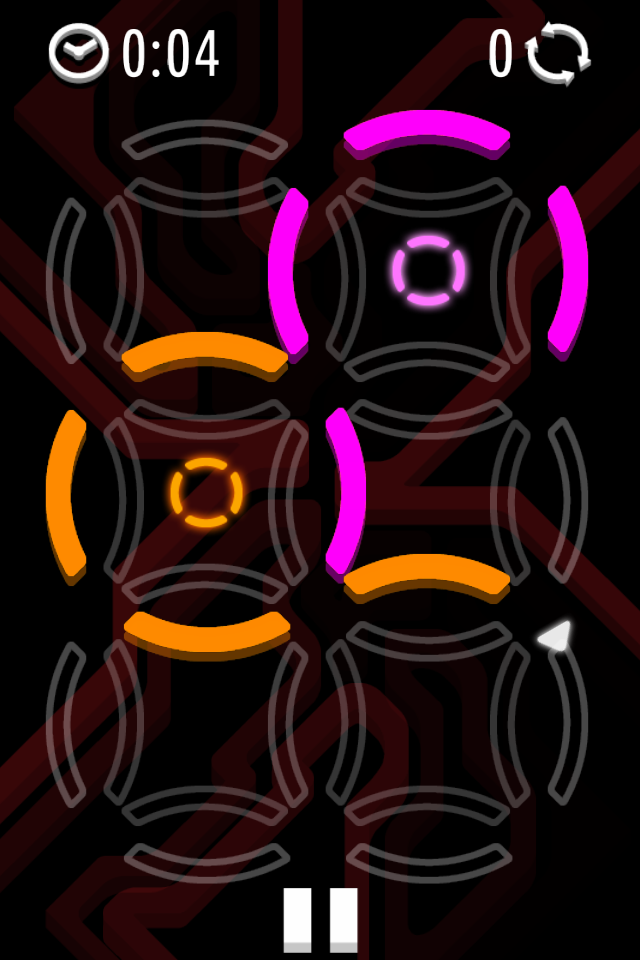 The image above shows the main limit of this game: many of the puzzles are sparsely populated, so they allow so much freedom of movement that they are of little interest for expert puzzle solvers. The difficulty does increase eventually, but you have to churn through a few naive puzzles before reaching a properly populated one: 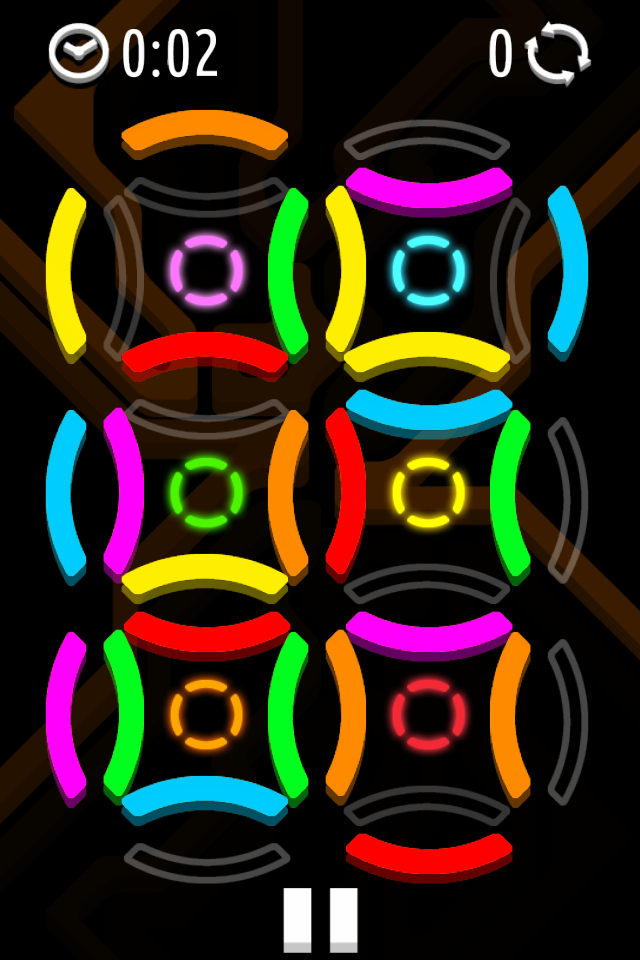 The game contains 6 packs of 6 puzzles each, for a total of 36 puzzles. The good thing is that each puzzle is actually a "configuration", scrambled differently every time you play. So once you find the good puzzles (like the one above), you can play them multiple times.

Each puzzle can be played at four levels of difficulty, which basically is simply the amount of scrambling applied. The easy difficulty is just one move away from the solved state, and that single move is even shown to you at the beginning! Frankly you'd better just play the hard versions right away. You'll need to anyway, in order to earn stars and unlock the later puzzles.

If you are familiar with commutators solving these puzzles shouldn't be too difficult, but the additional gameplay elements introduced in later packs do make a difference and will require you to carefully think about the consequences of your moves.

First you get to play with cogwheels, which link the movement of multiple rings: 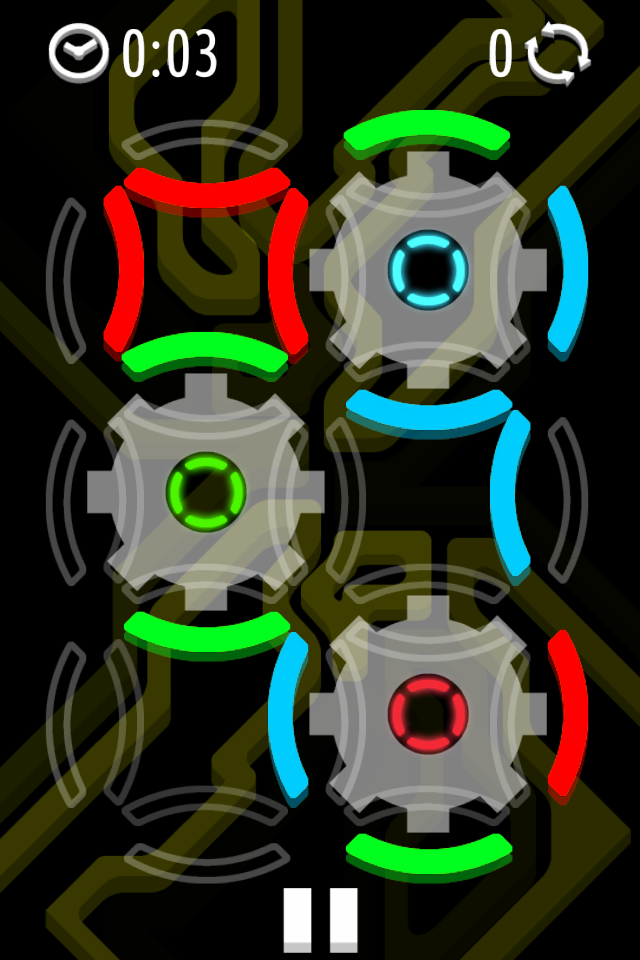 Then "mirrors", which link the right and left sides of the puzzle (and sometimes also top and bottom) so that it's like playing on a cylinder, or sphere. I found this mode very confusing at times. 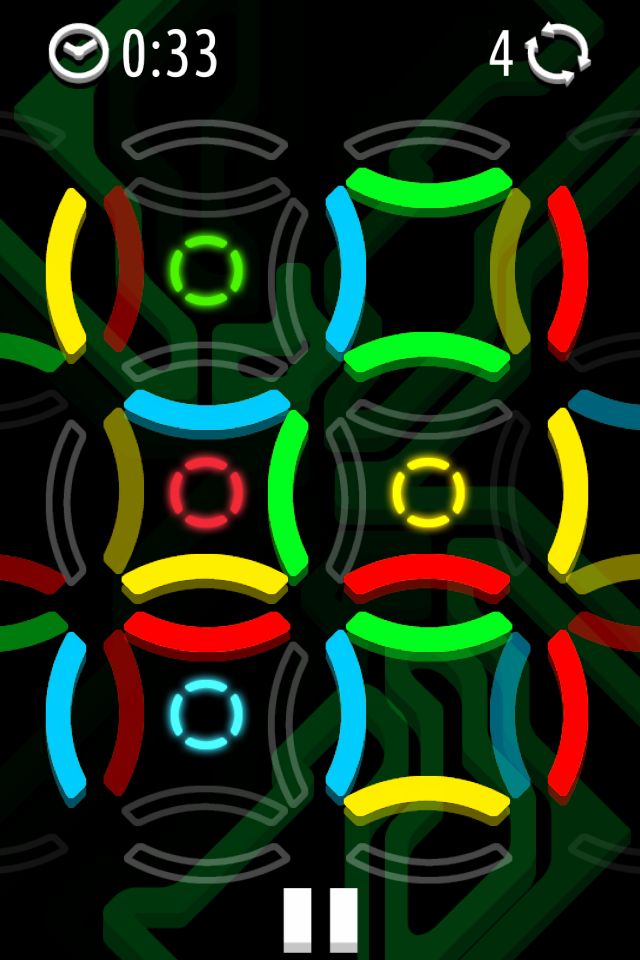 And finally arrows, which change the way how the internal 4 arcs rotate when you turn a ring: they can either rotate in the opposite direction of the outer arcs, or rotate normally when the ring turns in one direction and stay still in the other case. 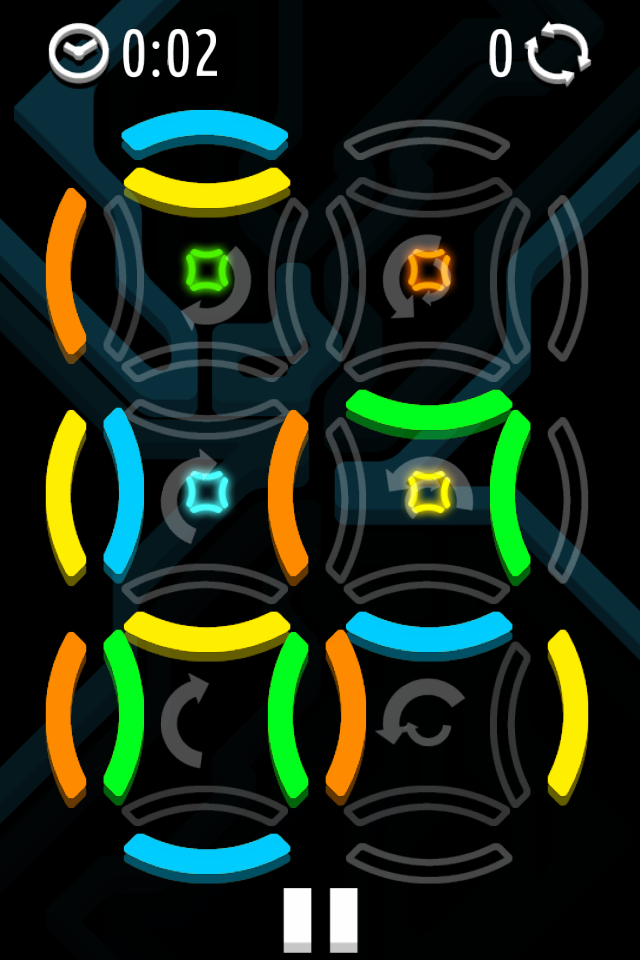 The final pack contains combinations of all the elements.

A nasty bug must have escaped QA testing, because a couple of the puzzles in the last pack seem to contain nonsensical gibberish, like this one: 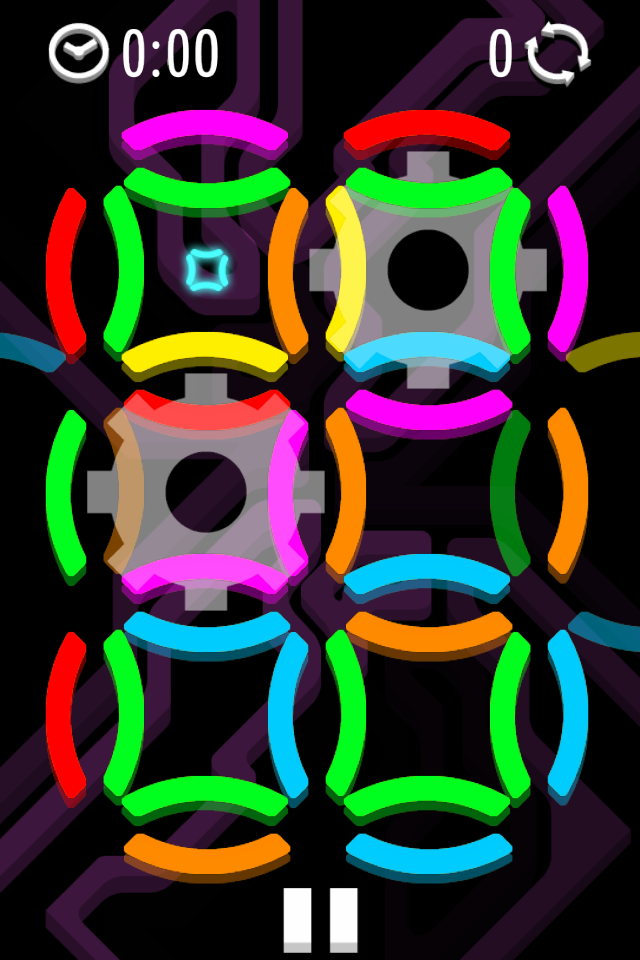 Here the goal stated is to just have four cyan arcs in the top left, but the whole board is full of random colors. And this is on the Easy difficulty, so we were supposed to be just one move away from the solution.

I liked the variety of the puzzles included in this game, but I could have done without the churning needed to unlock them all. Still, if you like this kind of rearrangement puzzles, this can be a worthy addition to your library.


©2014 Nicola Salmoria. Unauthorized use and/or duplication without express and written permission is strictly prohibited. Excerpts and links may be used, provided that full and clear credit is given to Nicola Salmoria and nontrivialgames.blogspot.com with appropriate and specific direction to the original content.
Posted by Unknown at 4:39 PM