Apologies for the infrequent updates. I've been tied up by family matters and by contract work on Puzzlium. So many great puzzle games have been released in the past few months! Even if I don't have time to write full reviews, I always talk about the best games on Twitter, so make sure to follow me.

It's rare for me to like puzzle games that have a real time element, but iON Bond by Stewart Hogarth caught my interest, probably because the timing is very relaxed and doesn't require deadly accuracy nor lightning fast reflexes. 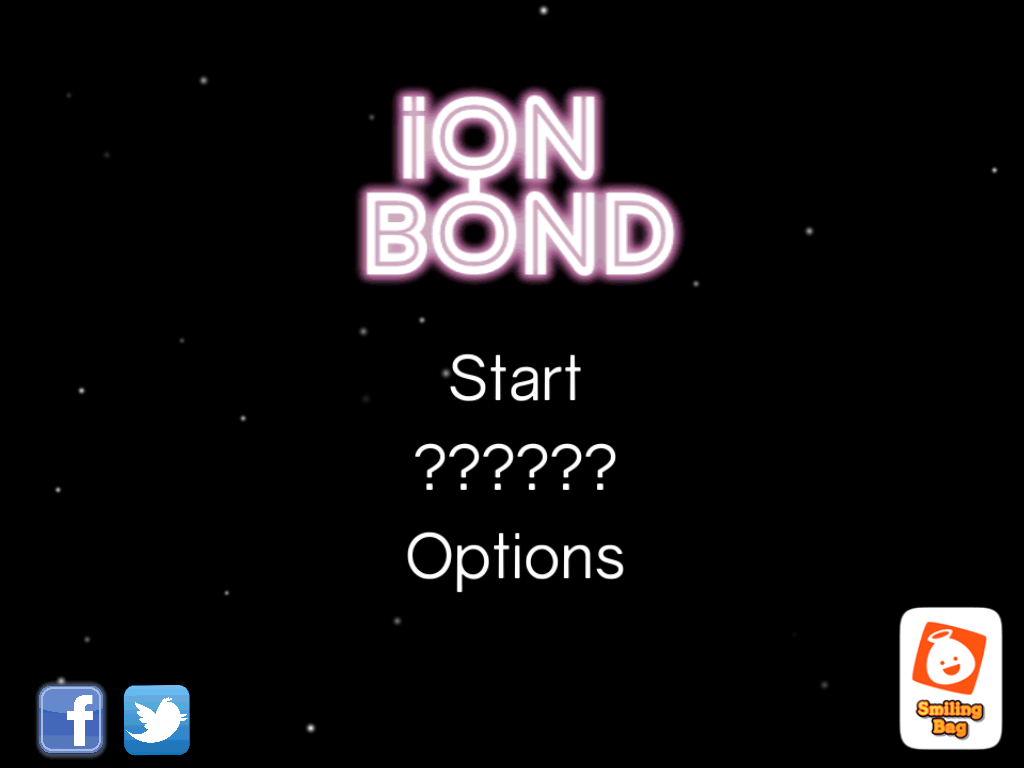 Those ?????? you can see above intrigued me enough that I made it a point of honor to see what was hiding there before writing this review. I succeeded, which should be good proof that the game is interesting enough, and the difficulty properly balanced.

The premises of the game are pretty simple. There are some particles on the screen, which you can't control directly, but only through bonds that you can form with other particles. 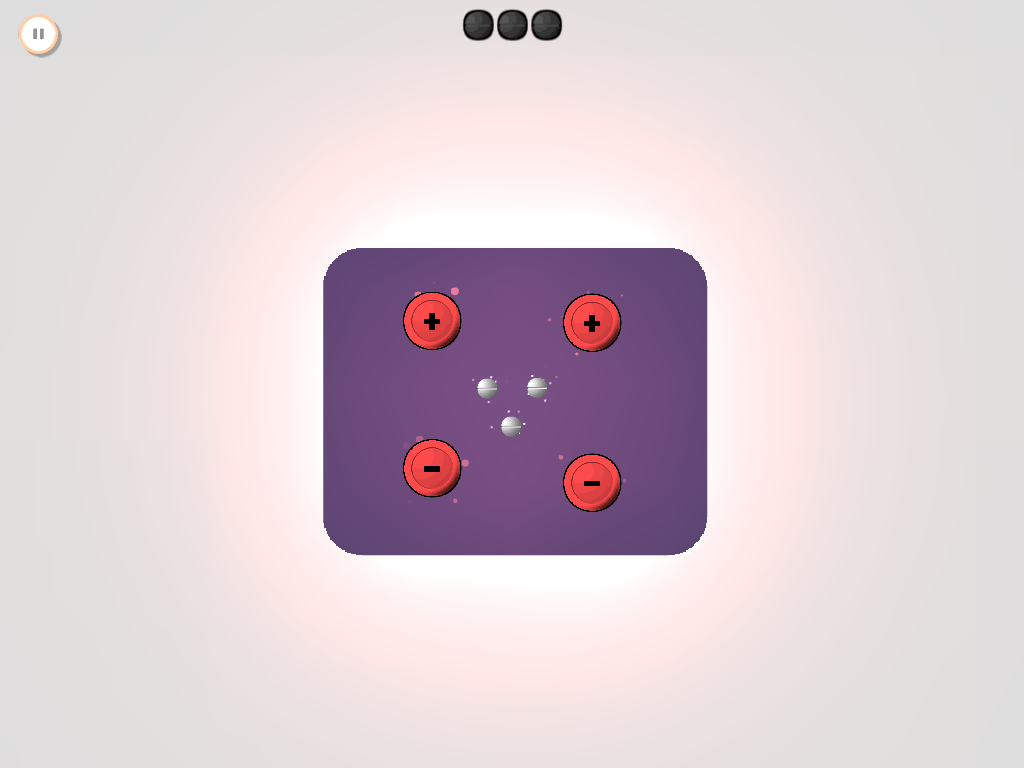 You use your finger to draw bonds. When you connect two particles, they start to interact depending on their sign. Opposite signs attract, equal signs repel. The particles have lots of intertia and they move rather slowly, so you have time to form complex interactions between multiple particles. You can also break the bonds you formed by swiping through them; this is something that you'll need to do often as the game progresses. 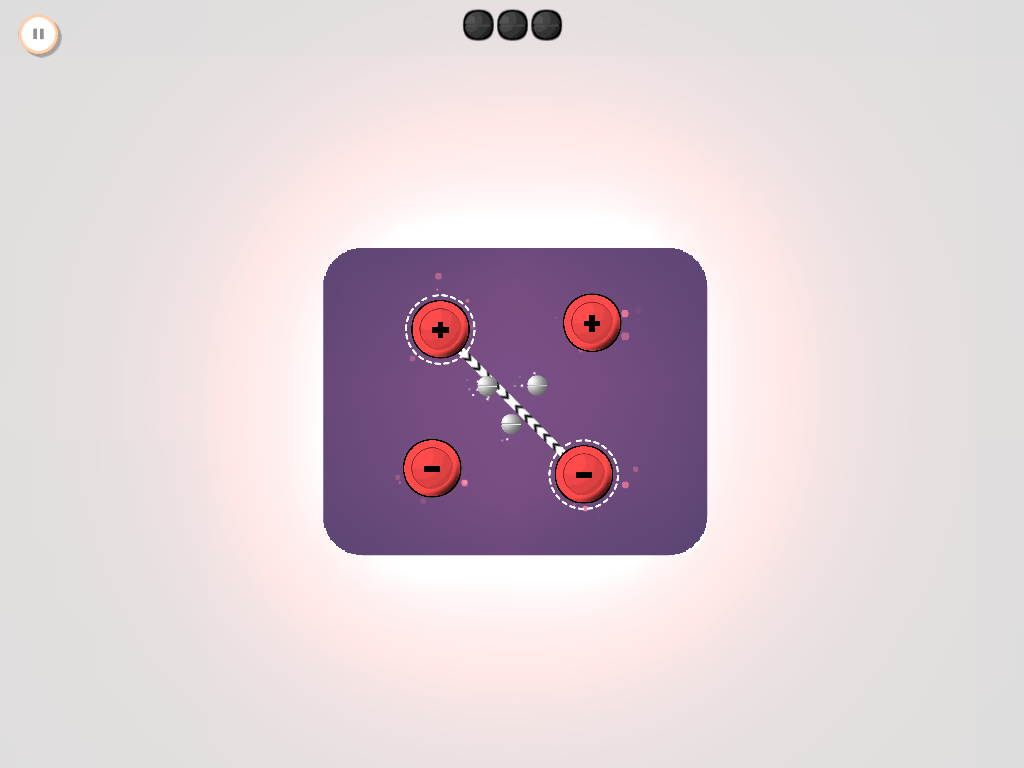 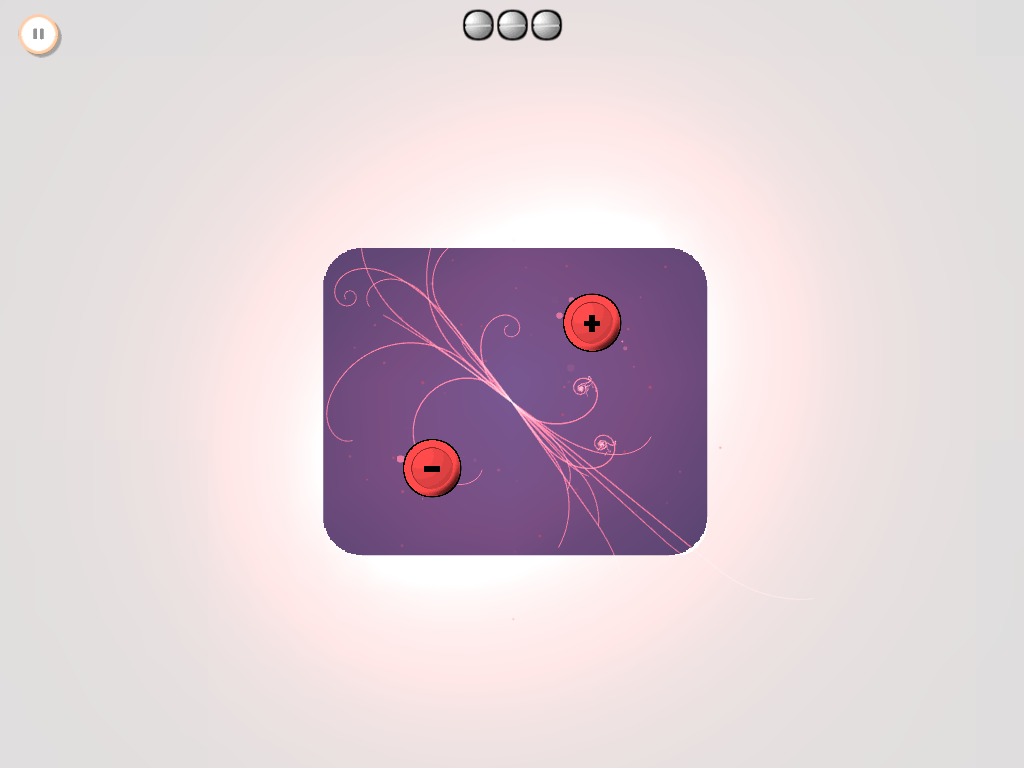 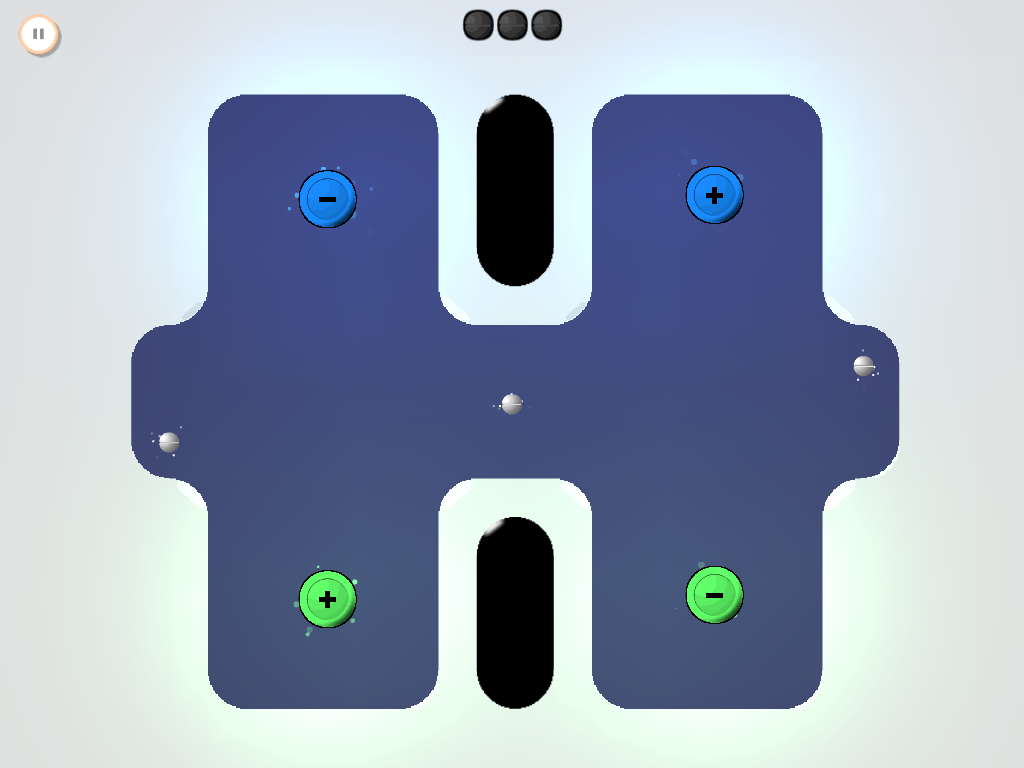 Charged particles are the most common, but there are also neutral particles like the red ones below. They don't interact with other particles, so you need to find other ways to move them. 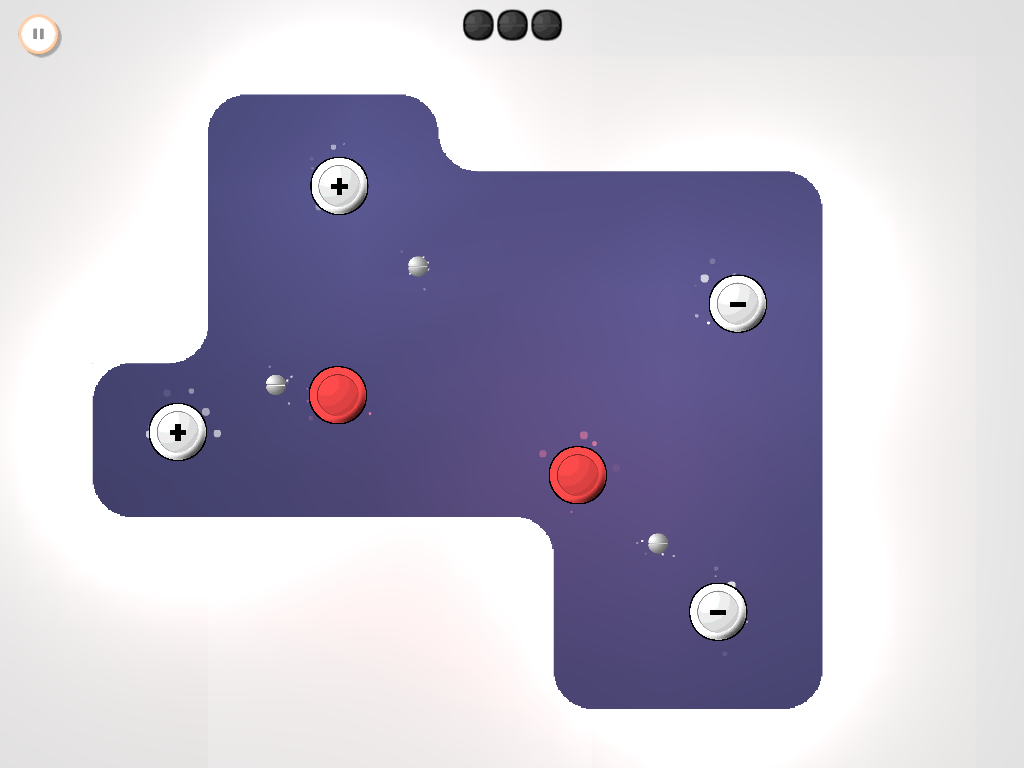 Normally the walls are friendly: they just stop the particles, but you can draw bonds over them without limitations. Dark walls, however, will destroy particles that hit them, which isn't a good thing, because to complete a level you must destroy the particles only through collisions. Additionally, bonds cannot pass through dark matter, so e.g. in the level below you can't bond the two red particles. 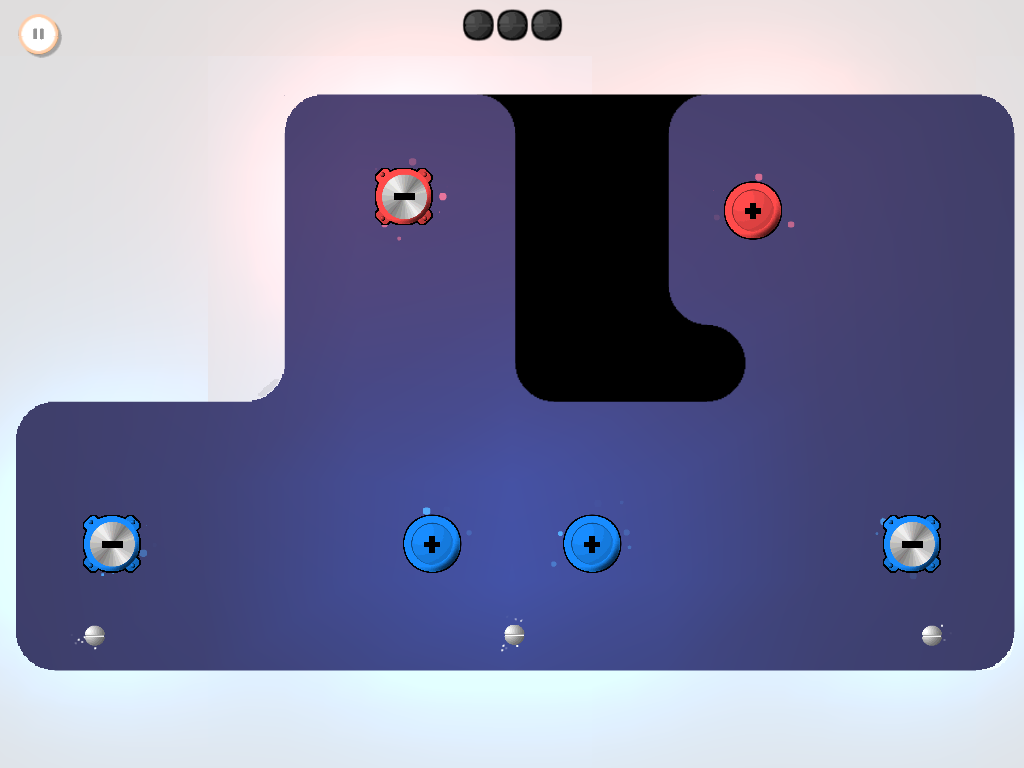 There are many other elements introduced later, like "uncertain" particles, energy fields, unstable particles. This helps keep the game varied through its 60 levels.

The game plays in real time, however it doesn't feel like an action game, because the speed is quite slow. The levels feel more like proper puzzles, because figuring out what to do is harder than timing your actions correctly. Many of the levels have an easy, obvious solution which unfortunately isn't enough to collect the neutrinos. To get those, you often have to go significantly out of your way.

The user interface is improvable. I found it annoying that there isn't a button to immediately restart a level: you need to go through an intermediate menu. I was also put off by the very long fades and unskippable splash screen that happen when you launch the game. It all gives a feeling of a "console" game, instead of a mobile game that one wants to load as quickly as possible.

The game doesn't work well on phones, because everything is very small and difficult to interact with. Additionally, on my 4th gen iPod Touch it ran at a rather low frame rate, making it sluggish and difficult to control. On iPad Mini it works fine.

Curious about what the ?????? button I mentioned at the beginning does? I'm not going to spoil the surprise: you'll need to collect three neutrinos in all levels to see for yourself. However, I think that to make the effort really worthwhile there should be Game Center integration, which sadly is missing.

All in all, this is a nice relaxing game which is worth a try.


©2014 Nicola Salmoria. Unauthorized use and/or duplication without express and written permission is strictly prohibited. Excerpts and links may be used, provided that full and clear credit is given to Nicola Salmoria and nontrivialgames.blogspot.com with appropriate and specific direction to the original content.
Posted by Unknown at 7:11 PM