Perfect Tiling by Eric Paquet is a put-together puzzle game for iPhone and iPad, whose distinctive feature is that the puzzles are randomly generated every time you play.

There's also a free version, which should be identical apart from containing ads. 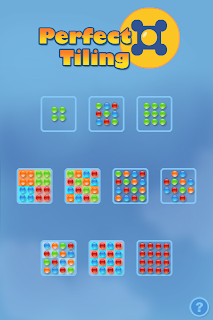 There are 10 puzzle modes, visible above. Initially only the first is available, and the others are unlocked in sequence. I found this a bit arbitrary and would have preferred all modes to be available from the start; what I would have added instead, is keeping track of the number of puzzles solved and the best time taken, for each puzzle mode. That would have added some motivation to take advantage of the randomisation and play your preferred modes multiple times.

All puzzle modes are based on tiles whose shape is sort of a cloverleaf; each of the four leaves can be missing. The first puzzle mode uses a 2x2 grid so it acts as a tutorial: it's very easy to solve regardless of the random tiles you are served. 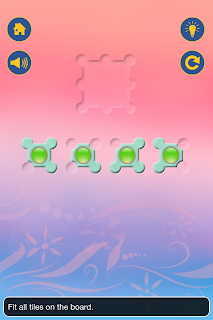 I don't think the randomisation does anything to limit the number of possible solutions; it just ensures that there is at least one.

Should you be stuck, there's also a hint option which will place one tile on the board, but can be used only once per puzzle. Also, for some unclear reason, in some puzzles you start with a tile already on the board (which cannot be moved around).

In most of the puzzle modes, tiles also have different colors. For example, you may need to ensure that in every row and column, every color is represented exactly once. 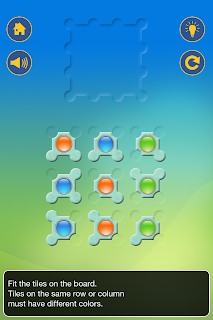 A peculiar oddity of the user interface is that when you start dragging a tile, the tile snaps to a position that isn't directly below your finger, but a bit higher. This looked like a bug at first, then I realised it was done to ensure you can see the whole tile while you drag it around, otherwise you would covering it with your finger.

Placing tiles on the board works well enough, but removing them (when you realise you made a mistake) felt a bit cumbersome. There isn't a quick way to pick up a tile and just throw it away with a swipe of the finger; you need to move it all the way down to one of the empty holes below the board. If you move it out of the board but not over an empty hole, it snaps back on the board.

The App Store description says that Perfect Tiling is "a game of logic and observation". This is a funny conincidence since it's exactly the same incipit that I used for Twin Beams. :-)
To be honest, in some of the puzzle modes logic doesn't seem to play a big enough part; it looks like all you can possibly do is place the first tiles almost at random, then attempt to fill in the gaps.

There are, however, at least a couple of puzzle modes where logic deductions can be proficiently applied; those are the modes where the colors of the tiles needs to match colors already placed on the board, significantly reducing the possible arrangements. Like in the fourth mode: 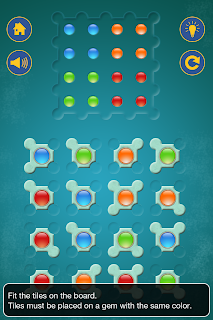 here, for example, there's no other orange tile that could go to the left of the third tile in the second row, so that tile must be in the third column of the board.


The fifth puzzle mode seems to be the one where this works best: 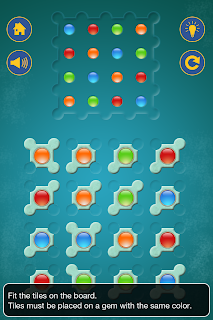 the fact that the tile colors are interleaved adds more constraints. I've solved several dozen puzzles in this mode, and in most cases a pleasing chain of deductions could be done. Occasionally, the deductions where definitely nontrivial.

The routine protanopia simulation shows that some improvements could be made using a slightly different palette and/or shapes other than circles to identify the tiles: 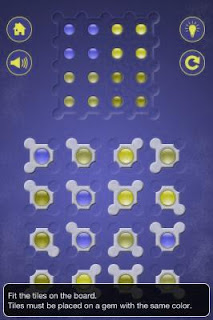 Even if it were for the fifth puzzle mode alone, this game is highly recommended. Make sure to have the patience to actually unlock that mode; it shouldn't be too difficult, and the patience will be rewarded by an unlimited number of good logic challenges.


©2013 Nicola Salmoria. Unauthorized use and/or duplication without express and written permission is strictly prohibited. Excerpts and links may be used, provided that full and clear credit is given to Nicola Salmoria and nontrivialgames.blogspot.com with appropriate and specific direction to the original content.
Posted by Unknown at 11:18 PM