Review: Subaku for iPhone and iPad

I'm usually suspicious of puzzle games that have "easy to learn and difficult to master" in their description, but Subaku by Eric Koziol is good despite that.

I'm also totally bored by sudoku, but thankfully, despite the misleading icon and the suspiciously similar name, this is a completely different puzzle.

If you are suspicious too, there's also a free version called subaku mini, which contains just the first 10 puzzles. 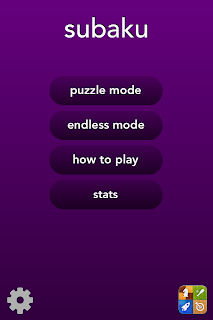 The game is played on a 3x3 grid, containing some numbered tiles. 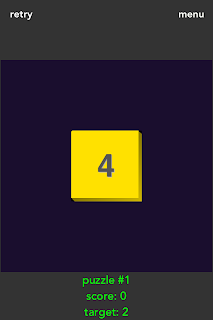 when you tap a tile, its value is decreased by one, and its orthogonal neighbors are increased by one. So tapping the 4 above gives this: 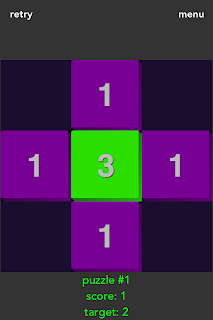 when a row, column, or diagonal contains three identical numbers, they are all removed. The goal is to clear the board.
So tapping the 3 above would give this, and solve the puzzle: 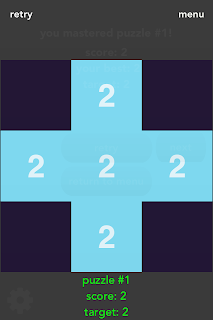 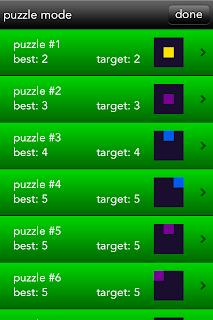 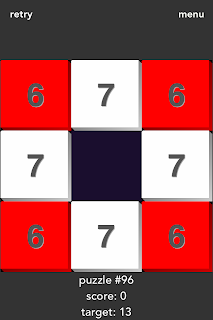 There are many options, some of them quite unusual like using kanji numbers, or removing numbers altogether (and using only colors instead). There are many inventive Game Center achievements too.


Additionally to the puzzle mode, there's an endless mode where the goal is to play as long as possible without clearing the board. To make it interesting, random events happen every 5 moves. This game mode is good for casual playing.

One criticism I have is that if you tap the menu button, you are brought to a crowded screen with several unrelated options: return to game / retry / return to menu / previous / next. I think this is a confusing choice and the user interface could be simplified.

But that's a nitpick; the game has original mechanics and is fun to play, so it's easily recommended.


©2013 Nicola Salmoria. Unauthorized use and/or duplication without express and written permission is strictly prohibited. Excerpts and links may be used, provided that full and clear credit is given to Nicola Salmoria and nontrivialgames.blogspot.com with appropriate and specific direction to the original content.
Posted by Nicola at 12:37 AM