My new game, Zen Garden Puzzle, is now available on the App Store! 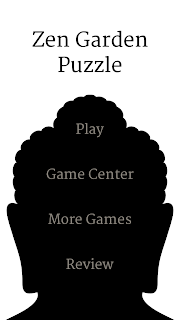 You've probably already seen the video, so let's talk in more detail about the mechanics.

The play area is a square grid containing a few delimited areas and an equal number of stones. The goal is to put one stone in every area. 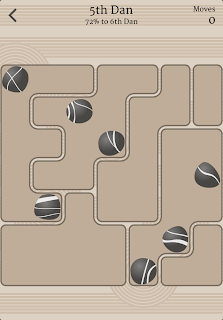 The catch is that, while you can move the stones freely all around the screen, every time you move one stone some other stone moves by itself in the opposite direction. This is done so that this fundamental rule is respected: there is always exactly one stone in every row and every column.

After moving the stones in the rightmost two columns, here is where I was: 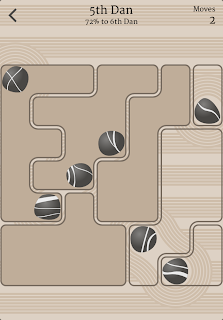 This is beginning to show why the game is called "Zen Garden Puzzle". When an area contains exactly one stone, it disappears and reveals that below it is a zen garden, with its characteristic rake patterns resembling water ripples. The patterns change while you play, to match the current position of the stones.

When you eventually reach the solution, the whole garden is exposed. 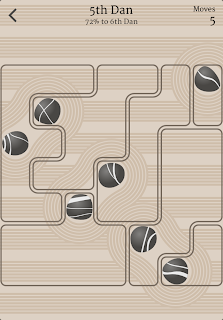 It is interesting to note that from every position of the stones, the solution can always be reached in no more than just 3 moves. So even if you move at random, you will never be farther away than you were at the beginning. Warning, though: solving a puzzle in 3 moves is very, very hard and requires full concentration.

As a reward, after solving a puzzle you get a quote to meditate over. In this case, it was a haiku poem by Kobayashi Issa. 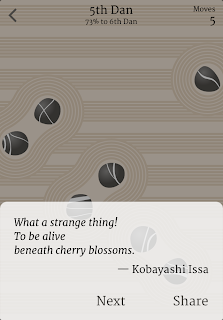 Usually at this point I would say how many puzzles the game contains, but this isn't how Zen Garden Puzzle works. It focuses on providing an immersive, endless experience, so there is no puzzle list and no definite number of puzzles. Instead, after solving a puzzle, there is a seamless transition to the next one. The stones remain where you left them, but new borders are drawn around them, forming a new puzzle to solve.


In an attempt to avoid cluttering the user interface, there is no credits screen in the game, so allow me to list them here:


Last but not least, I'd like to thank the beta testers, who have been invaluable. Everything good in Zen Garden Puzzle is thanks to them; everything bad is my fault. In alphabetical order:
Roberto Canogar
Tom Cutrofello
Glenn Iba
Raf Peeters
Eric Wolter