Review: Move: A Brain Shifting Game for iPhone and iPad

I had high hopes in Move: A Brain Shifting Game by the Israelian Nitako. 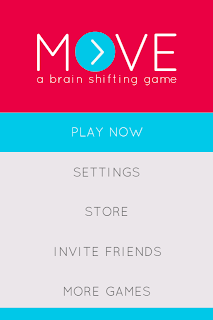 Initially, the game seemed very fun and addictive. I played through the first 40 puzzles without even realising it. As I moved through the puzzles, however, I felt something was wrong.

But first, let's see the rules. The mechanics are the same as Escapology, stripped to the bare bones by removing the additional clutter of arrows and magnets. Therefore, all we have is a board with some discs, which can move, and gray blocks, which don't move. 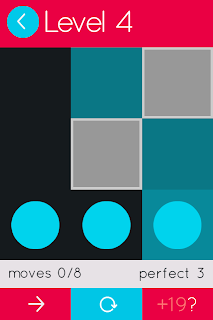 When you swipe over the board, all discs that aren't blocked move in the same direction. The goal is to bring all pawns over the colored squares. In the example above, there is only one color, but there can be as many as the number of discs.

The puzzles are divided into packs of 100 puzzles each. The first three packs are free; for the others, you can try the first 10 puzzles and have to buy the rest.

Looking at the pack list, my opinion is that they have been assembled with too strict rules. Every pack contains puzzles of only one kind, e.g. "4x4 board, 4 pawns, 2 colors", which makes them quite boring. Instead of making 12 packs of identical puzzles to cover all combinations, it might have made more sense to provide less packs, with a mix of puzzle types in each pack. 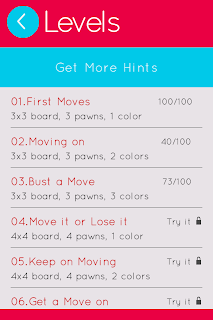 The choice of puzzles is indeed the major flaw of this game. After playing for a while, it becomes obvious that the puzzles have been randomly generated and roughly sorted by the optimal number of moves needed to solve them, but without any attention to their quality or variety. Especially playing the 3x3 puzzles, a feeling of deja vu soon arises. And indeed, look at these two almost consecutive puzzles: 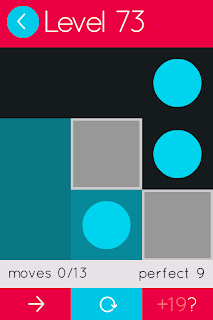 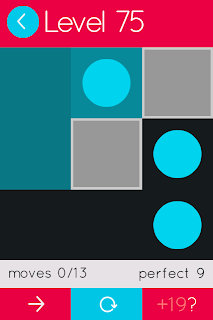 They are identical, except for a reflection.

But the best example in the whole game is this one: 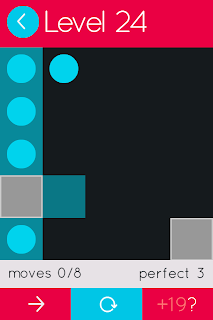 This is the 24th puzzle in its pack. Could it be any more trivial than this?

The game is free and the mechanics are fine so give it a try, but given the poor quality of the puzzle selection I can't recommend spending money on the additional packs.


©2013 Nicola Salmoria. Unauthorized use and/or duplication without express and written permission is strictly prohibited. Excerpts and links may be used, provided that full and clear credit is given to Nicola Salmoria and nontrivialgames.blogspot.com with appropriate and specific direction to the original content.
Posted by Nicola at 5:43 PM