Lately I've slightly reduced the frequency of my reviews, for a couple of reasons.

The main one is that, sadly, the past few weeks on the App Store have been less than memorable for puzzle games. There's a deluge of Rush Hour copycats, and an annoying amount of apps that try to have titles and icons similar to the apparently very popular Candy Crush Saga, but I could find very few puzzle games of any interest.

A couple of games had pretty good puzzle mechanics. Too good, apparently, to be original. Indeed, I recognised Raf Peeters' style in one of them, and sure enough, after some quick research I found it to be a blatant copy of Hide & Seek Safari.
I had already published a positive review of another game, when Tom Cutrofello told me it was a clone of Lunar Lockout. That's not necessarily a bad thing per se, but certainly the origin of the puzzle should have been acknowledge by the author of the app.


The other reason for the less frequent reviews is that, after the release of Brain Twirler, I've been working on the design of my next game.

My initial plan was to make a new version of Twin Beams, featuring a new interface and a new pack of easier puzzles. However, after pondering over it, I came to the conclusion that it was better to do something different, though still based on similar rules. The main reasons for this are:
So I had two essential goals: make Twin Beams easier, and more interactive.

To make it easier, the obvious choice was using the Star Battle rules with 1 star per row/column/area instead of 2.
To make it more interactive, I borrowed Lazor's fundamental idea of placing all markers on the board from the start and letting the user move them around, instead of starting with an empty board and adding markers to it.

Regarding the interactivity, the initial idea I had was to start with a marker in every area, and only allow it to be moved inside that area. So to solve the puzzle the player would only need to ensure that the other rules were satisfied (1 marker per row and column, and no markers next to each other). I prototyped this, but I didn't think it worked well. I then had a different idea to limit the player's movements without limiting them, but I'll talk about it another time.

While testing, I also noticed that the rule of not having markers next to each other was partially redundant: since there must be only 1 marker per row and column anyway, they could be adjacent only diagonally. Was it necessary to leave this rule? I decided it wasn't, so with the goal of making the game as simple as possible, I dropped it. Essentially, this turned the puzzles into a variant of the Rooks problem, with the additonal costraint of having only one rook in each area.

If you are curious. this is what the current prototype looks like. As an exercise, you can also try solving the puzzle :-) 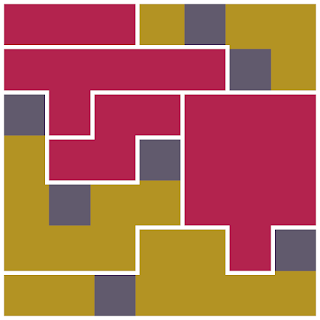 Next time I'll talk about how I'm selecting the puzzles to be included in the game, which turned out to be a lot more difficult than I expected. In the meantime, if you have questions or suggestions, don't be shy and leave a comment!


©2013 Nicola Salmoria. Unauthorized use and/or duplication without express and written permission is strictly prohibited. Excerpts and links may be used, provided that full and clear credit is given to Nicola Salmoria and nontrivialgames.blogspot.com with appropriate and specific direction to the original content.
Posted by Unknown at 12:00 AM