Hyperbolic Magnetism, in the person of Jan Split Ilavsky, surely knows how to make puzzle games that stand out from the crowd. Perfect Paths is his best so far. 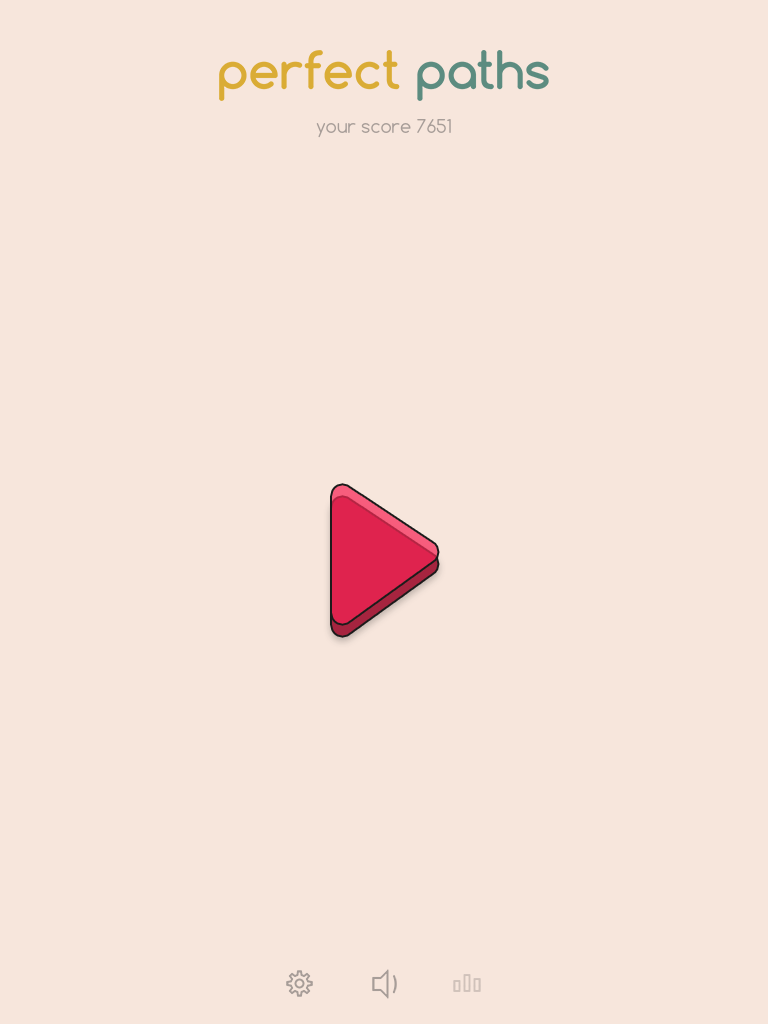 Perfect Paths is based on the previous Trappped, an iPad-only game which I think was let down by the layout of the user interface. While they share the basic mechanics, everything else has been improved so much that it can be considered a wholly new game.

Since the launch of Threes, I've seen more and more developers make animated gifs to showcase their game, which is great because it makes it so much easier to explain what the game is about. So here is Perfect Paths in all its glory:

If you feel a bit overwhelmed, that's fine: the mechanics are complex. The game does a good job of introducing the concepts one at a time, so let's start from the beginning.

Your goal is to bring the blocks over the circles of the same color. To do that, you use arrows. You draw the whole path in advance, then when you are satisfied tap the play button. The blocks then start dancing an elaborate dance, underlined by very appropriate sound effects and elegant animations. It's fun to watch just for that, even if your plan fails, as will happen most of the time. 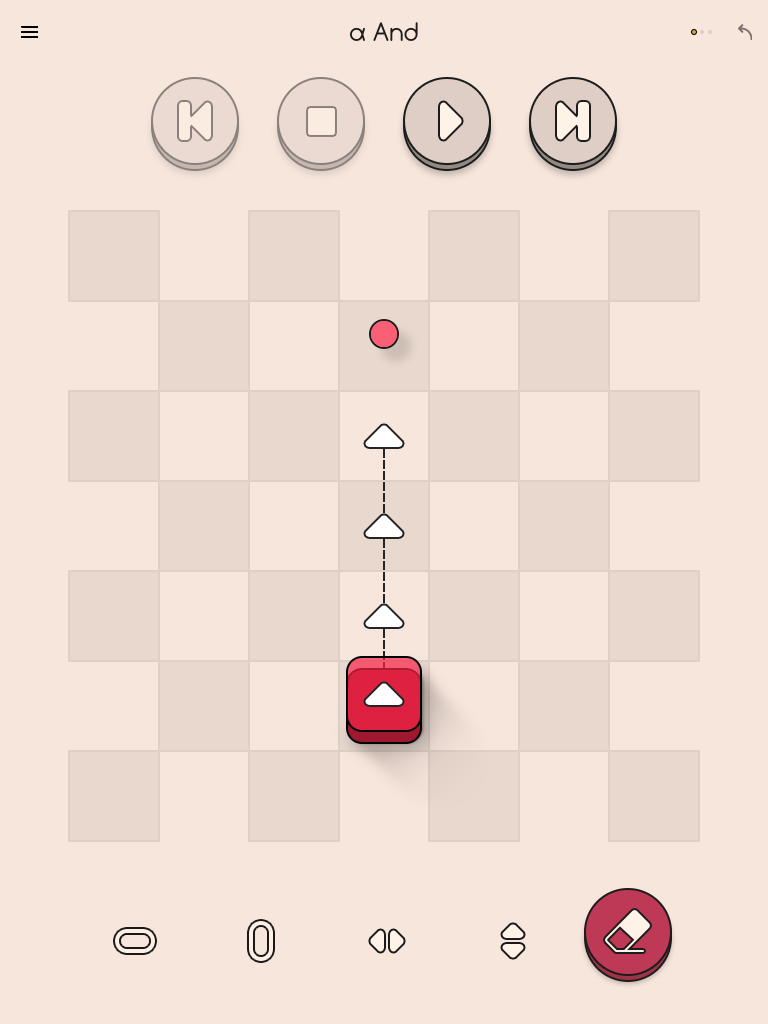 The immediate comparison that springs to mind is the classic Trainyard. That is, however, a very different game; in many ways, easier and more intuitive. The key concept of Trainyard is the railroad switches which toggle every time a train passes through them. Once you understand how those work, you can do pretty much anything, and solving the puzzles is mostly a matter of adjusting the initial position of the switches.

Parfect Paths, however, has nothing like that. Once you set an arrow, every block that passes through that cell will go in the same direction; you can't make one block turn left and the next one turn right. The only slight exception to this is crossroads, shown as diamonds on the board. 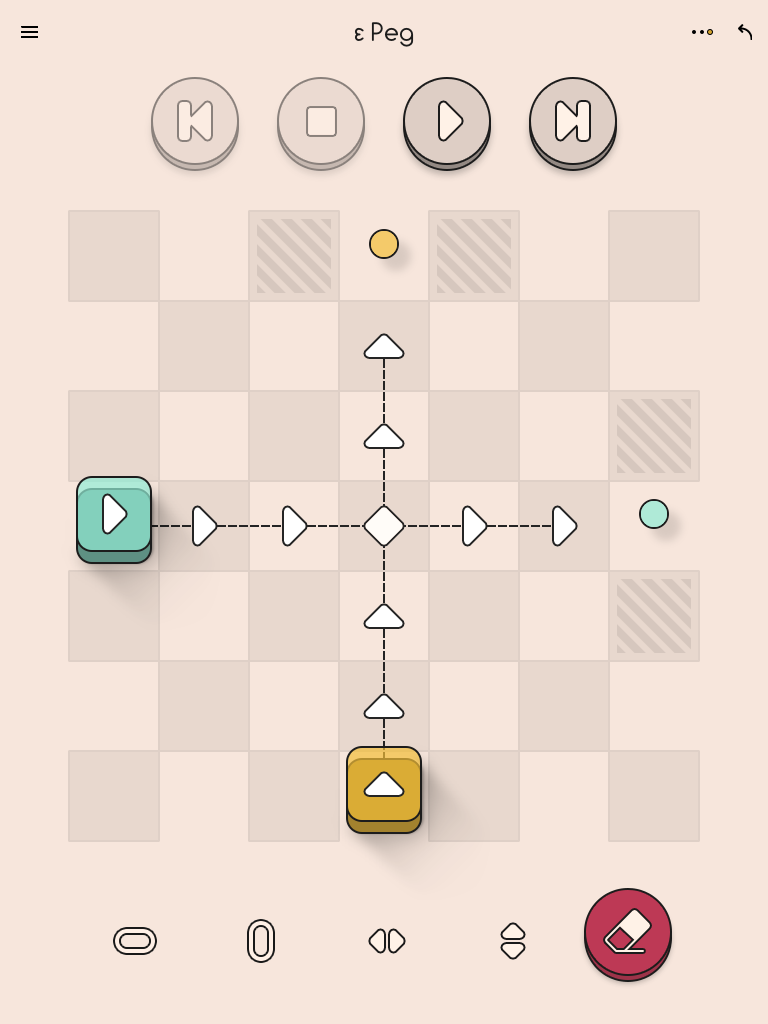 When a block passes through a crossroad, it just goes straight through it. This allows the paths to intersect, but there's not much else you can do without the other mechanics.

One important limitation is that you cannot put arrows on the goal squares (which makes sense because otherwise after reaching the goal the block would be sent away!) nor on the dashed squares. This creates configurations like the following one where some goals are apparently unreachable. 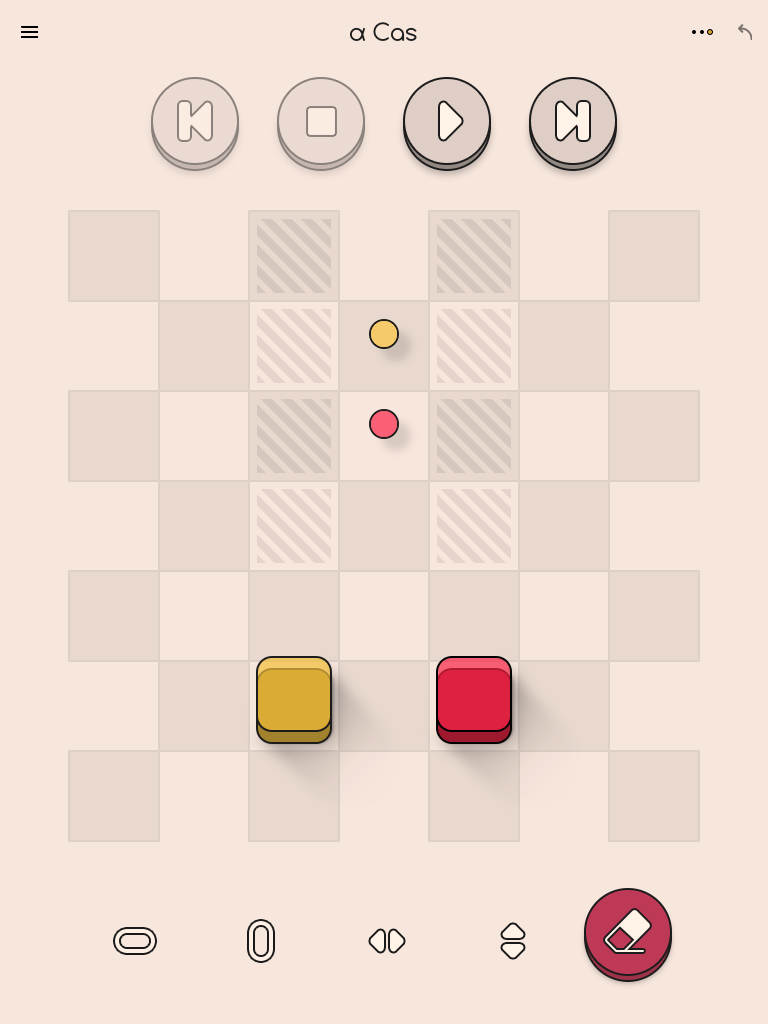 The solution to this is to use one block to push another. If you line up the blocks vertically so that the yellow one is on top and the red one is below it, when the red block moves up it will push the yellow one, and they can both reach their goals at the same time.

The extension of pushing is the other weapon you have at your disposal: by placing on the board the chain symbols that you can see at the bottom left of the screen, you can join blocks, so that when one of them moves the other will move together with it. Using this possibility can also be a requirement of the puzzles, like in this one, where the white lines between some of the goals indicate that the blocks over those cells must be joined (and note that like with arrows, you can't simply put a chain command over a goal cell). 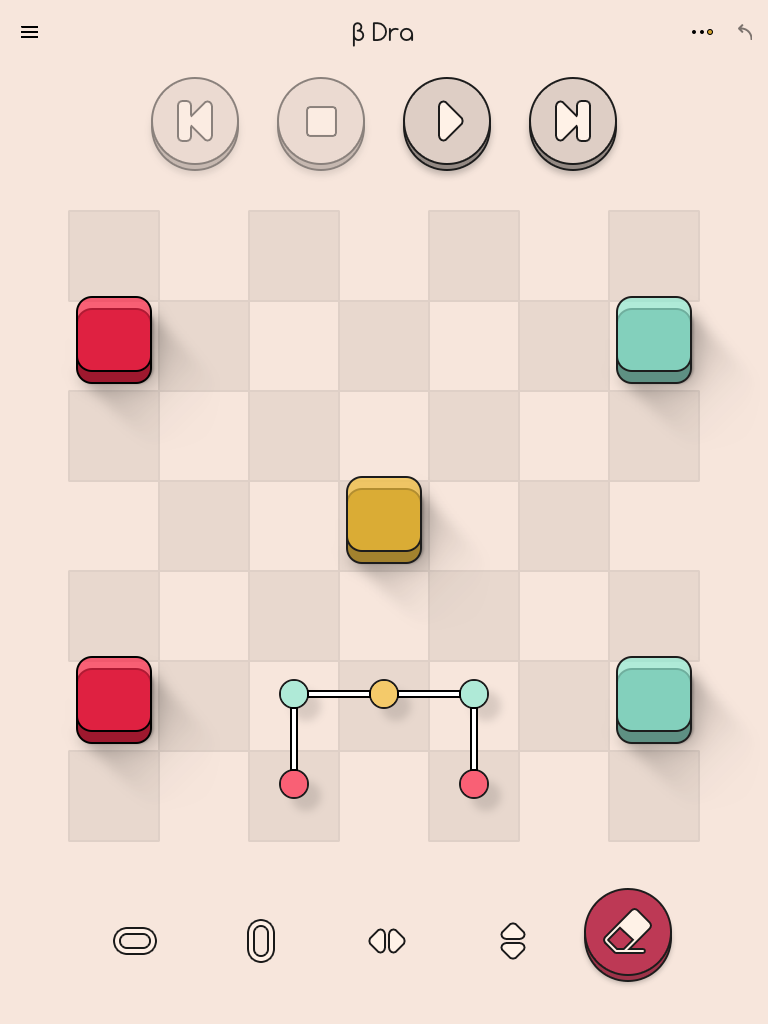 The other two icons you can see at the bottom are the inverse command: they let you separate blocks which had previously been joined.

If you have been following carefully, you might have wondered about a possible loophole in the rules: what should happen if two blocks are joined and they are on two arrows with conflicting directions, e.g. one up and one down? Which direction should they go?

The answer lies in the most subtle element of the game: the phase timeline. The arrows are not all active at the same time: instead, one direction is processed at a time. After you tap the play button, you can see the phase timeline scroll at the bottom of the screen, showing the order of things: first UP, then DOWN, then RIGHT, then LEFT. 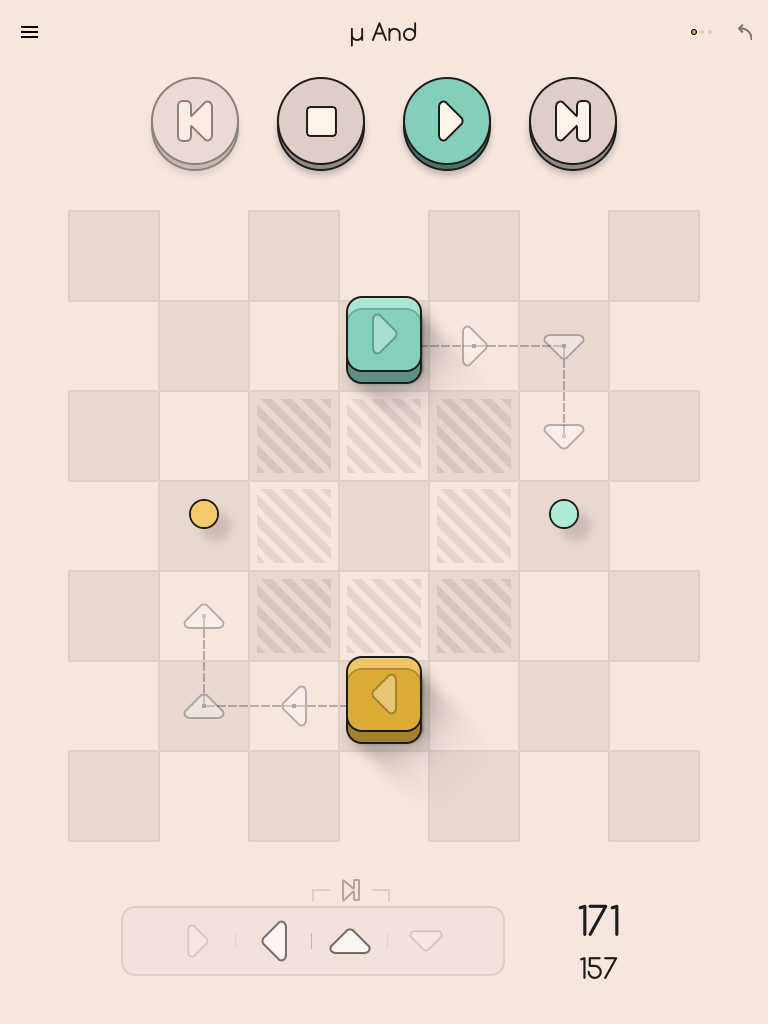 When the blocks start pushing and linking, the phase order becomes very important to make things work as you want, and can lead to unexpected results.

As you can see, the game's rules are surprisingly deep, and despite all the efforts that have been made to give it a gentle learning curve, the mechanics can take a while to get used to, especially if you have played Trainyard. You need a completely different mindset to solve these puzzles; the lack of control over the arrows can be extremely frustrating until something finally "clicks" in your head. I have to say that I was stuck on the Alpha Pegasus level for a long time before getting it. (Hint: remember what you did in the Cassiopeia levels).

I liked the premises and the style of one of the Jan's previous games, Escapology (developed with Vladimir Hrincar), though I marked it down in my review for having many puzzles but of erratic quality. It has to be said, however, that since then I haven't found any better game with similar mechanics.

Perfect Paths, if anything, has the opposite problem, being a bit light on content. I was lucky enough to play a beta version of the game, and I've already solved all the puzzles. However, the pack selection screen shows a couple of important things. 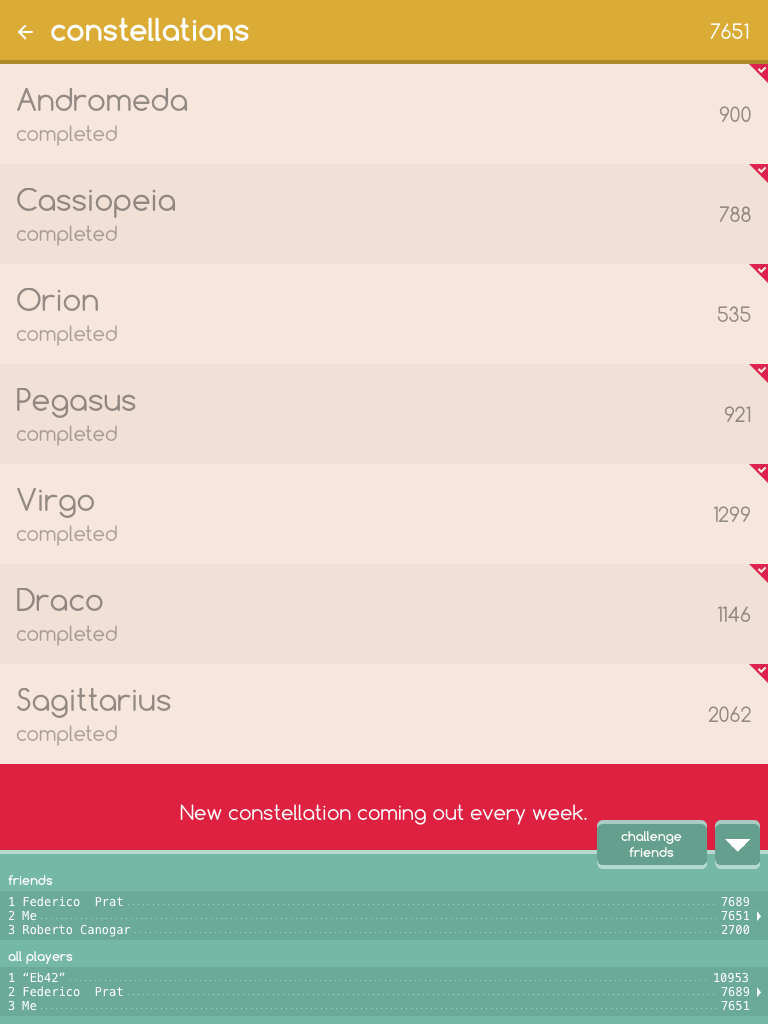 The first one is the promise of new puzzles to be released every week. This will be done using app updates, so if the author can keep his promise, this will be an absolutely great and novel way to keep players engaged over time without flooding them with annoying push notifications. While a few games have provided content updates from time to time, I think this would be the first time it would be done so frequently.

The second important thing on that screen is how prominently the Game Center leaderboards are displayed. They are right there on the same screen as the puzzles, instead of being tucked away inside the standard Game Center pages. This is useful because the solutions to the puzzles are totally open to your creativity, and the game doesn't provide any reference to judge how good they are, so comparing with other players is the only way to put them in context.

It is a testament to the quality of the game that despite having solved all the puzzles, I keep coming back to it attempting to further improve my score. The name Perfect Paths is very fitting, because for a programmer's mind like mine, just finding a solution isn't enough: you want it to be the best one possible, and compete on the leaderboards to prove it. Which isn't that easy if one of your friends is Federico Prat Villar.

The user interface works fine, though I found the erase button to work a bit counterintuitively and require too many taps to correct your path. Also, since most of the playing time is spent looking for optimisations, I wish the puzzle list showed thumbnails (to find quickly the puzzle you think you can improve) and there was a quick way to move to the prev/next puzzle instead of going through the puzzle list every time.I also wish that the back button had a bit larger hit area because it's difficult to tap it when the iPad is inside a case covering part of the bezel.

If you want to try and improve your leaderboard standings, let me spend a few words on how the scoring works. There are only two things that affect the score: the number of arrows you use, and how many steps it takes for the solution to run. In both cases, the less, the better.

Optimizing the first parameter is obvious: just try to use as less arrows as possible. A nice thing is that after being introduced to the advanced mechanics later in the game, you can go back to the first few levels, which you solved naively, and try to improve them using the new elements at your disposal. So do use those combinators in Andromeda!

Optimizing the solution run time is subtler. Clearly, a shorter path should be quicker. However, because of the phase timeline, blocks are slow to travel in a straight direction: 4 phases (up, down, right, left) need to pass between one move and the next. So for example if you need to move 2 cells up and 2 cells right, doing UP, UP, RIGHT, RIGHT isn't the fastest option: it needs 1+4+2+4=11 steps.  If you do UP, RIGHT, UP, RIGHT instead, you need only 1+2+2+2=7 steps.

It's important to note that you get a lot of points for just solving the puzzles, while what you get for optimizing them is peanuts in comparison. When you look at the leaderboards, a difference of just one point means a lot more than it seems.

Without a doubt this is one of the best puzzle games of the year, and it promises to only get better over time, so stop wasting time and go buy it. And beat my score if you can :-)


©2014 Nicola Salmoria. Unauthorized use and/or duplication without express and written permission is strictly prohibited. Excerpts and links may be used, provided that full and clear credit is given to Nicola Salmoria and nontrivialgames.blogspot.com with appropriate and specific direction to the original content.
Posted by Unknown at 6:03 PM