A couple of weeks ago I tweeted about Find Figure by Art Studio Dereza. Currently I'm not updating this blog as often as I would like to, but I talk about interesting new games on Twitter first, so make sure to follow me to be up to date with puzzle games news. 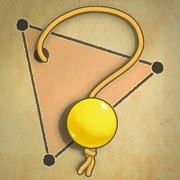 I find that my mind takes particular enjoyment in puzzles that require visual-spatial ability. This tends to show in the games I develop, especially in Twin Beams, a difficult puzzle which however can be solved at ridiculously high speeds if one just looks for visual patterns. Find Figure is a lot easier, but it's also more complex than it might look at first sight.

The basic idea is that you need to connect the dots on the right side of the screen, forming a series of shapes given on the left side. This looks trivial at first: 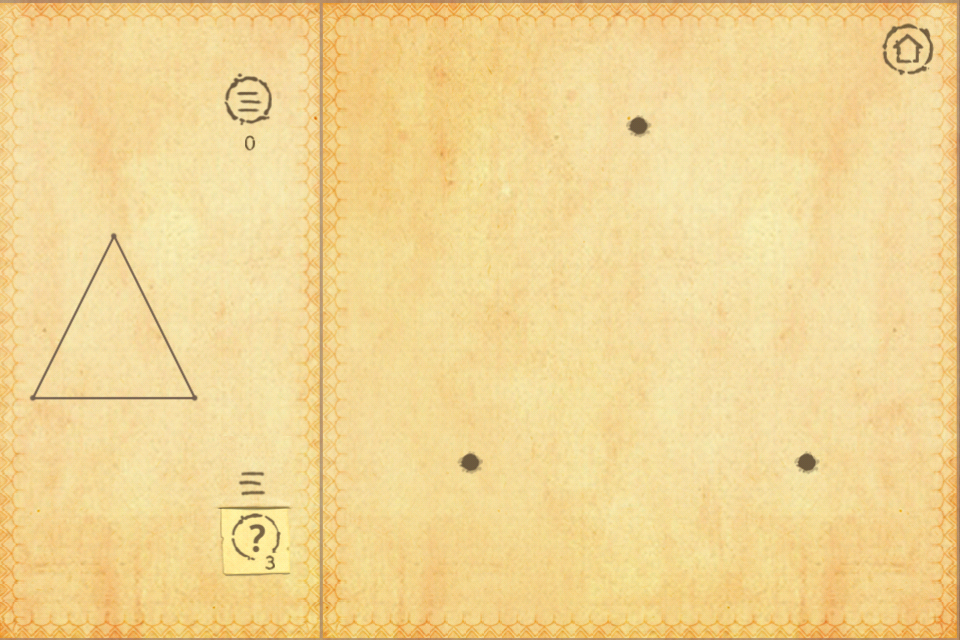 and doesn't really get much harder adding one more shape: 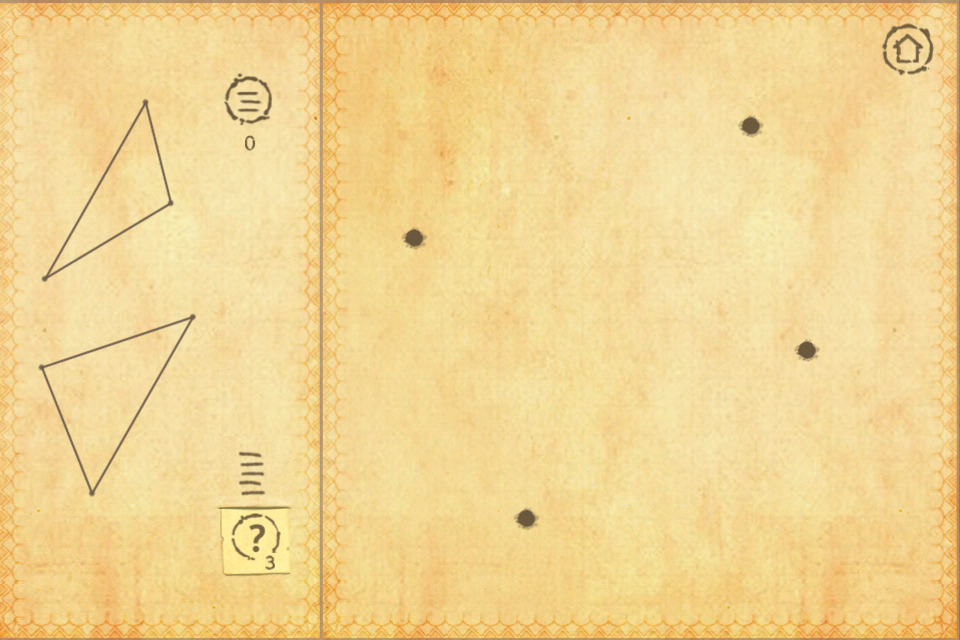 but a new twist gets soon added to the mix, making things a lot more interesting. The lines you draw can intersect, and you must make use of that to create the correct shapes. 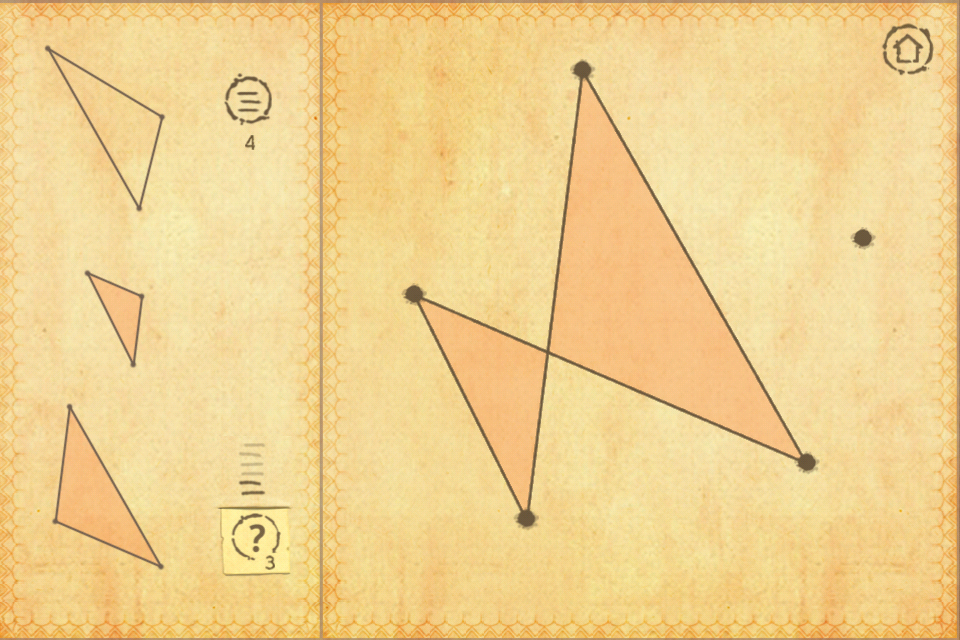 Initially, the shapes shown on the left are in scale, which helps a lot. After a while, however, they start being drawn out of scale, which adds more confusion. 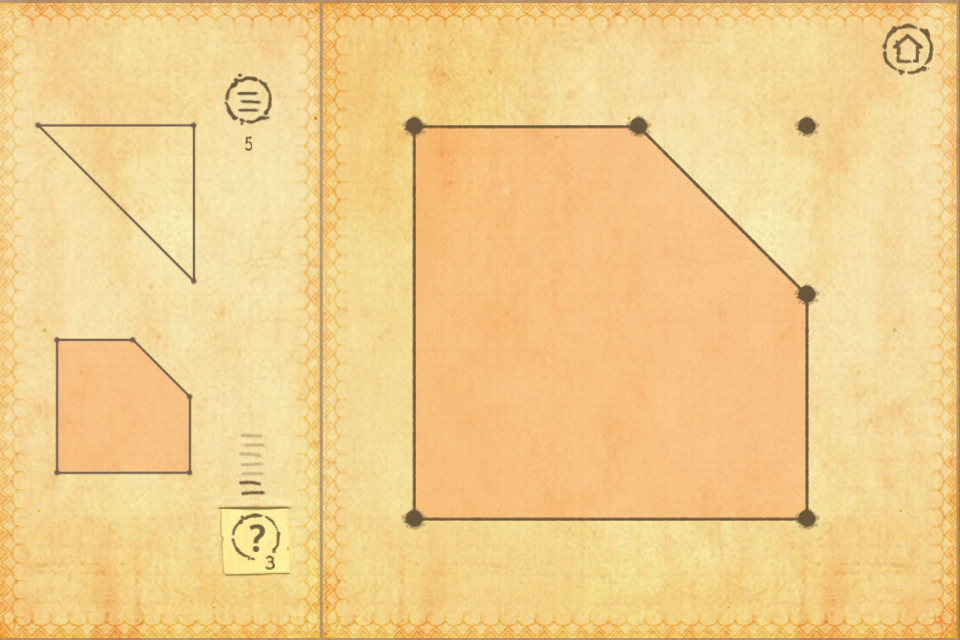 When there are many dots and shapes, it can seem a bit overwhelming at first. However, at this stage even if the shapes are not in scale, they are always in the correct orientation, so you can use the angles of the sides to orient yourself. 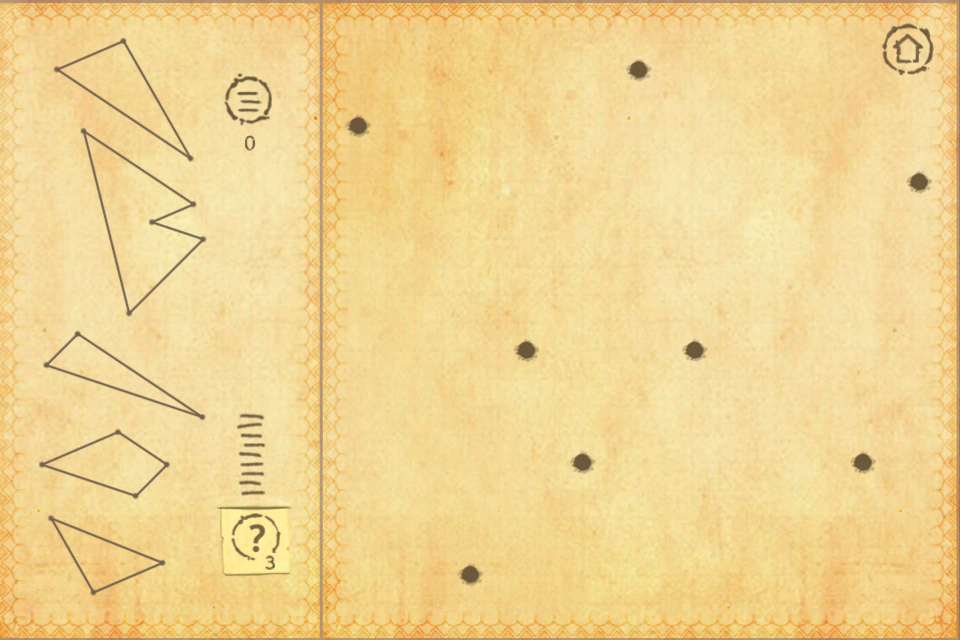 There's an interesting additional complication, which however isn't used by the game nearly as often as it should. When you draw a matching shape on the board, it is highlighted; this doesn't mean, however, that the shape is in the correct place. Look at the top left triangle in this puzzle. You can draw it this way... 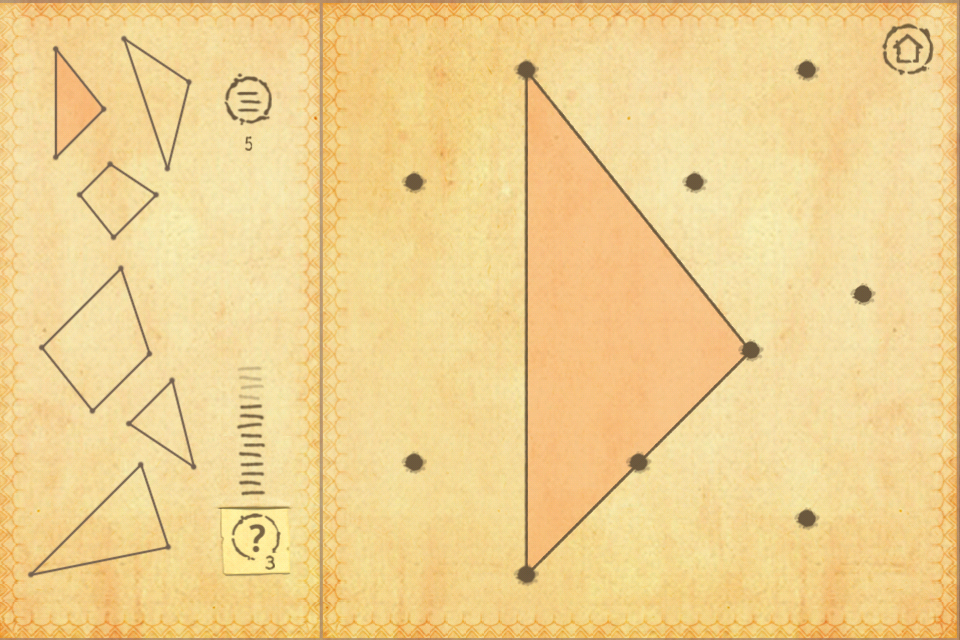 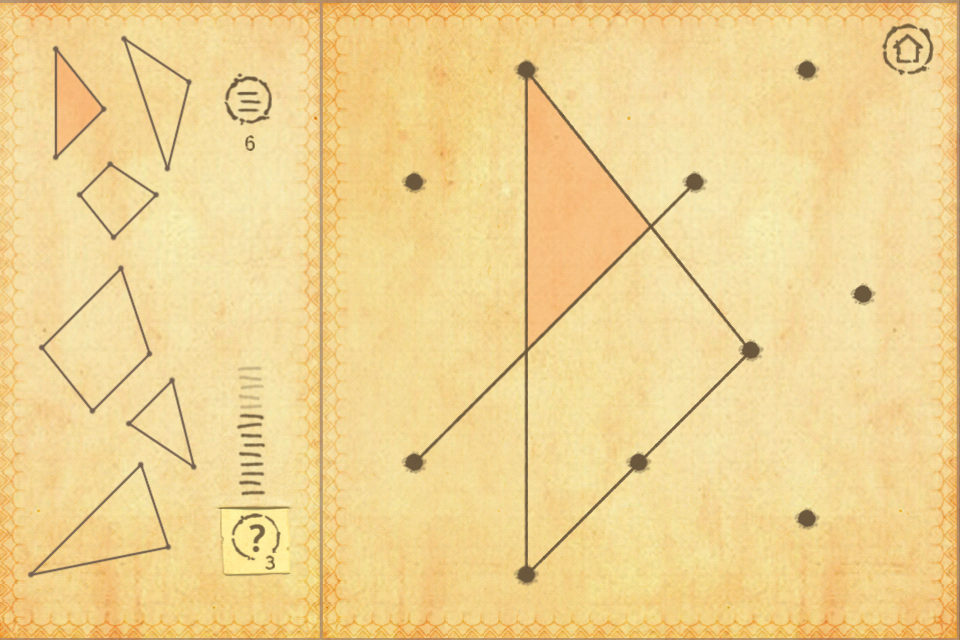 ... or this way! And maybe more. But only one way is correct and will allow to put all the pieces on the board. It's important to be aware of this otherwise you might get stuck on the wrong track. 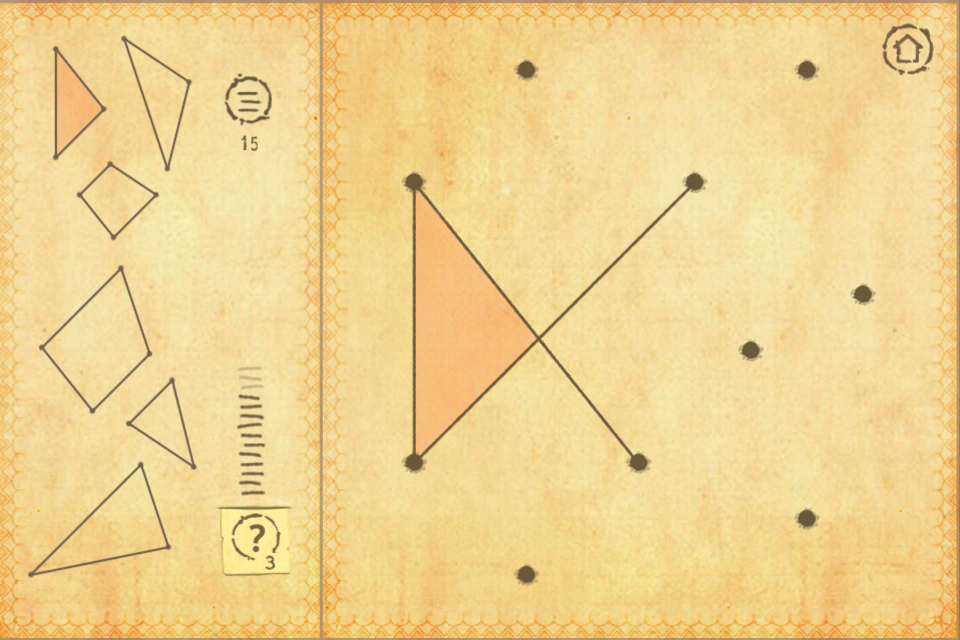 Inevitably, the reassuringly correct orientation of the shapes had to go away, so after a while the game starts highlighting in yellow the pieces that need to be rotated when placed on the board (I think the tutorial message says "reversed", but they really have to be rotated). 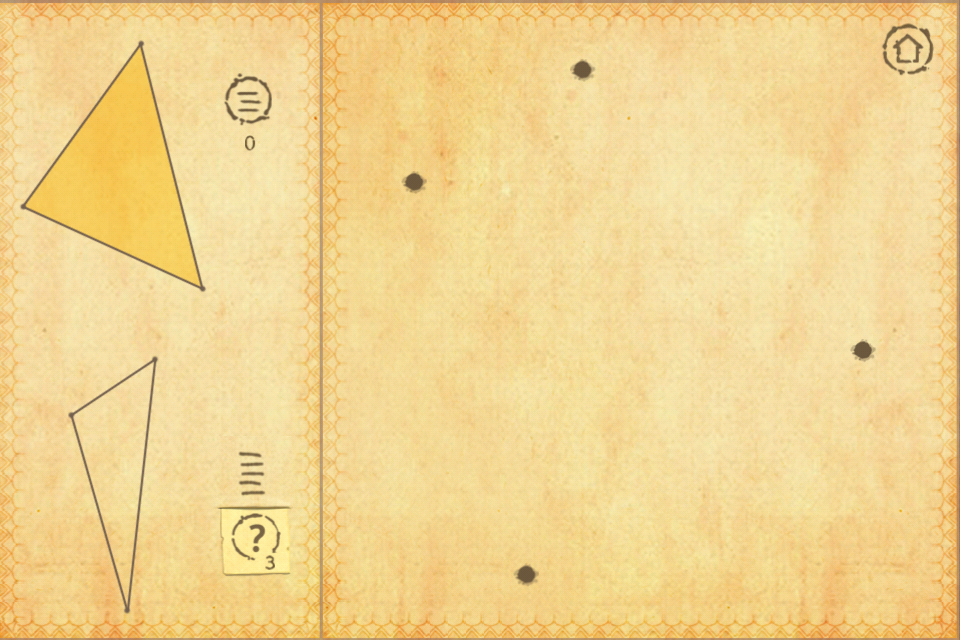 The user interface works fine; drag from a point to another to draw a line, tap a line to erase it. Playing on iPhone, it seems that you need to be just a bit more precise than necessary, which means occasionally having to draw a line twice to have it recognized, but it's not the end of the world.

There are 100 puzzles split in 10 packs. Packs are unlocked by earning enough beads, which is slightly annoying because the beads depend on how many mistakes you make. You can easily get three beads by playing a puzzle again after finding the solution, which means you are essentially forced to play most puzzles twice for no good reason. There also an optional in-app purchase to unlock everything, in case you can't be bothered to earn the beads.

All in all, this is a puzzle game which is easy enough to be relaxing, but also difficult enough to not be boring. The enjoyment I got from it was more than worth the price of admission.


©2014 Nicola Salmoria. Unauthorized use and/or duplication without express and written permission is strictly prohibited. Excerpts and links may be used, provided that full and clear credit is given to Nicola Salmoria and nontrivialgames.blogspot.com with appropriate and specific direction to the original content.
Posted by Unknown at 2:01 PM