Review: Spinpossible for iPhone and iPad

Eric Kelsic of ALX Games contacted me about the free puzzle game that he and his friends Alex Sutherland and Alex Sheive have developed: Spinpossible.

The basic idea is simple: take a puzzle based on group theory, like Rubik's Cube, but easier; and make the main goal of the game not just to reach the solved position, but to do it in the optimal number of moves.

The playing board of Spinpossible is a 3x3 grid, containing numbers. A move consists in rotating a rectangle of any size (including 1x1) by 180 degrees.
For example here is the starting position of one of the tutorial levels: 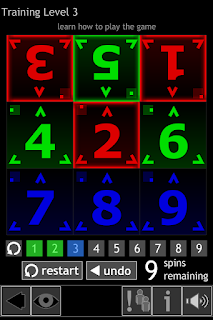 the first move we make is to rotate the 1x2 rectangle containing the 2 and the 5, leading to this position: 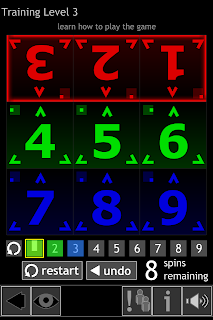 now we rotate the 3x1 rectangle containing 1, 2, and 3, and we have reached the solved state: 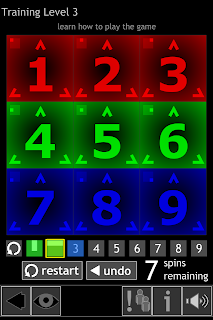 If you can solve Rubik's Cube—and by solving I don't mean using a set of operators learnt from a book, but consciously applying the concept of commutator to reach the solved state—you should have no problem with this new set of rules. If you don't, don't despair: the first few levels of the game do an excellent job of explaining the basic concepts.

Attempting to solve every puzzle in the optimal number of moves, however, changes things dramatically. For example, here is one of the early puzzles: 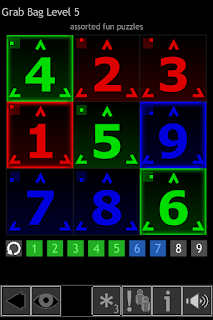 Reaching the solved state would be pretty simple: just rotate the (1,4) and (6,9) rectangles, which brings the numbers in the correct position but upside down; then rotate each number individually. That works, but it takes a total of 6 moves. The green squares at the bottom of the screen, however, indicate that the optimal solution requires just 5 moves. Can you find them?

The authors have written a paper about the mathematics of Spinpossible, and also verified through exhaustive search that 9 moves are sufficient and sometimes necessary to solve every position. However, you can be sure that finding those 9 moves can be extremely hard for a human. 5 moves, like in the example above, is already pretty difficult.

The game has 4 different playing modes:
To access some of the features you need to register on the Spinpossible web site, which is free.

Spinpossible is a must-have for every logic puzzle enthusiast. It is sure to push your brain to its limits, because, as the FAQ says, "no one has beaten all the levels without computer assistance".

The only criticism I have is for the user interface, which is a bit confused, and sluggish on some devices. This is a byproduct of the game being a port of a Flash game rather than a native iPhone app. Hopefully this will be improved in future updates.


©2013 Nicola Salmoria. Unauthorized use and/or duplication without express and written permission is strictly prohibited. Excerpts and links may be used, provided that full and clear credit is given to Nicola Salmoria and nontrivialgames.blogspot.com with appropriate and specific direction to the original content.
Posted by Nicola at 4:24 PM