Solitaire Chess (also free) is the iPhone port of an excellent board puzzle made by ThinkFun. It was invented by Vesa Timonen, a finnish engineer who created many ingenious mechanical puzzles.
Tilt is another puzzle in the same line, which I think would work great on iPhone. Hopefully someday it will be ported. 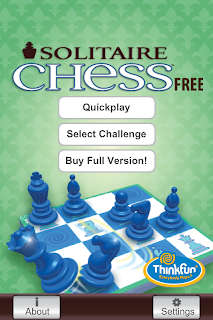 The basic idea is deceptively simple: put some traditional chess pieces on a 4x4 board, then use the normal chess rules to move one piece at a time. But here's the catch: for every move you make, you have to capture one piece. When only one piece remains, you have solved the puzzle. 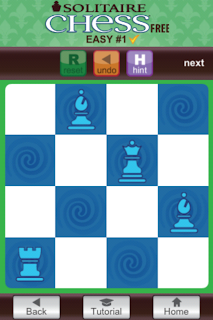 The above puzzle is easy enough, but things get trickier pretty soon.
You can use logic to rule out possibilities; also, it helps if you can figure out which piece should make the last move and reason backwards. 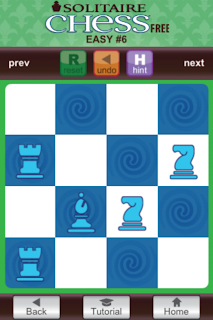 For example in the above puzzle it's clear that if you moved the Knight at the top right, it would have nowhere to go and it could not be captured. So it must stay in its place and can only be captured by a Rook; it isn't hard to figure out what to do before then.
Note that the solution to this puzzle is not unique; this is a common occurrence in this game, however the last piece remaining and its position at the end of the puzzle are always unique.

Here is how the difficult puzzles look like. Having more pieces on the board makes it a lot harder to find the correct sequence of moves. With these longer move sequences, the undo button can be useful, though figuring out which piece to move first is probably the hardest part. 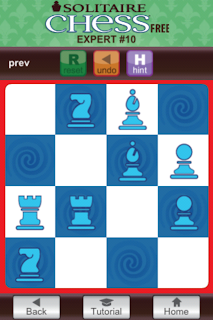 This game is a bit old (it was released at the beginning of 2011) and it shows, because it doesn't support the Retina resolution.


©2013 Nicola Salmoria. Unauthorized use and/or duplication without express and written permission is strictly prohibited. Excerpts and links may be used, provided that full and clear credit is given to Nicola Salmoria and nontrivialgames.blogspot.com with appropriate and specific direction to the original content.
Posted by Nicola at 8:55 PM