Review: Circles: Rotate the Rings, Slide the Sectors, Combine the Colors for iPhone and iPad

The first release of Circles was quite boring. From the screenshots it seemed something different, but in reality it was just another impersonation of the ubiquitous toroidal sliding block puzzle. The only difference was that instead of the usual square grid, in this game the tiles are warped to form a circle. 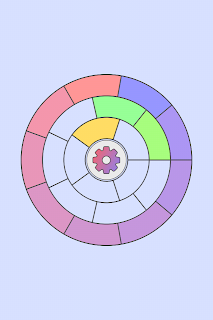 Luckily, version 1.1 fixed this by adding several new configurations that are guaranteed to make even experts of sliding block puzzles scratch their head.
The image above shows the main menu, which borrows the shape of the puzzles themselves.

All puzzles have the shape of a circle, divided into rings and sectors. You can rotate each ring around the center, or radially slide the tiles in one sector. The goal is to make each sector a single color.
That's all. Since there are no numbers to sort or picture to recompose, it is easier than most of the toroidal sliding puzzles on the App Store. 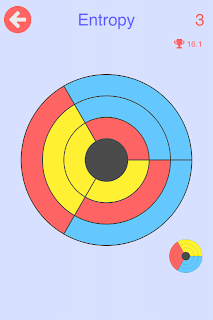 The puzzles on the external ring of the main menu all work the same; they just increase in size from 3x3 to 11x3, but this doesn't add much since they are all solved in the same way. 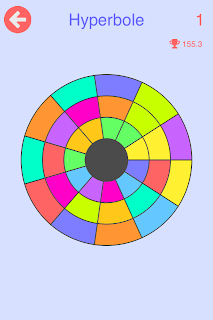 The same concept visualized on a real torus, for an equivalent size of 4x4, can be played online on Eric Solomon's site.

There is also at least one physical version of this puzzle, of size 8x4, called Octo puzzle. I suppose that playing with it is quite impractical, though.

So, the external ring of the main menu is quite boring. The other two rings, however, are a different story. The puzzles in there look the same as the other ones... 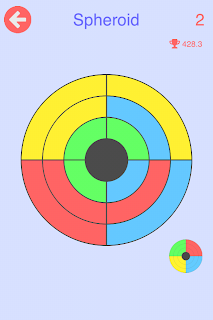 ...but the mechanics change significantly, because sliding a sector also causes another sector to slide. How the sectors are linked changes from puzzle to puzzle, so that for example instead of a torus the circle is mapped on a sphere, or a Klein bottle, or something else entirely which might not even be possible to describe.

Some of those puzzles had me stumped for a while. There's a lot of variety there, because the strategies needed to solve them change depending on how the sectors are linked.

There's also some puzzles which add a fourth ring; the goal is to make that ring a single color. This doesn't seem to add much, and actually makes the puzzles easier. 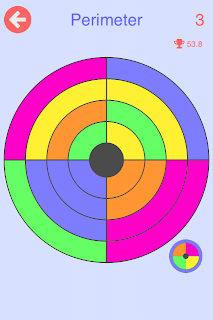 The puzzles in each ring of the main menu need to be unlocked in sequence.Also, while all of the puzzles in the external ring are free, most of the others are not; there's a single in-app purchases which unlocks all puzzles and removes ads.

The one thing I would like to be changed is the way how the puzzles are laid out in the main menu. It is currently unclear what to expect from each one, and the varied mechanics of the harder puzzles make it all look like a random mess. There is obviously some structure in the mechanics, and I would like to see it reflected in the way how you choose which puzzle to play.

The author of this game is Andrey Solovyev, a chemist borrowed to app development. He claims to have written this game in just one week (make that two for the update), which ain't bad for the results. I wish I could have the same cadence with my games, whose development time tends to be measured in months rather than days.

With the 1.1 update, this game is recommended because of its originality. You will have to pay for the harder puzzles, however, because that's where the meat is.


©2013 Nicola Salmoria. Unauthorized use and/or duplication without express and written permission is strictly prohibited. Excerpts and links may be used, provided that full and clear credit is given to Nicola Salmoria and nontrivialgames.blogspot.com with appropriate and specific direction to the original content.
Posted by Nicola at 2:42 PM