Review: Blockhouse for iPhone and iPad

Blockhouse is an old puzzle game by Kory Heath which was released in 2009. It's a classic, so if you missed it back then, it's not too late to check it out.
There's also a free version, Blockhouse Lite, which contains different puzzles, so it's worth getting it even if you buy the full version. 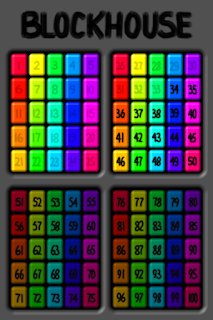 The game mechanics aren't new, and weren't new when Blockhouse was released, either. It's a tilt maze: swipe in one direction, and all blocks move in that direction until they hit something. The goal is to move every piece to a specified target position.

What makes this game stand out from the crowd, however, is variety. There are a few different kinds of puzzles, for example there are open spaces with complex polyominoes: 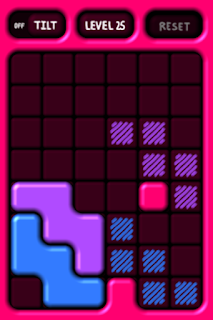 There are large mazes with square pieces—and being who I am, I can't restrain myself from showing the tribute to Pac-Man: 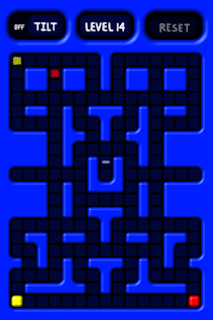 There are small, separated mazes: 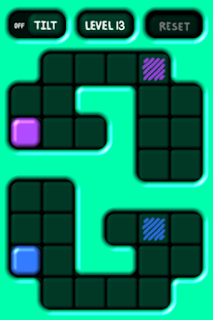 Note that just passing over the target position isn't enough: every piece must stop exactly on the target, at the same time. This requires some planning, and it's definitely unlikely to stumble on the solution by accident. Hint: it is often easier to solve the puzzles by mentally going backwards from the goal position.

Kory Heath wrote a very informative post about how he created this game. It's a goldmine of information for people interested in what it takes to make a nontrivial game. This is definitely not one of those characterless, randomly generated puzzle collections.


A great feature, unusual for tilt puzzles, is that it is impossible to get stuck in an unsolvable position. No matter what you do, it's always possible to reach the goal. This reduces stress and encourages random tinkering during the early stages of a puzzle; but you will have to use your brain to solve it.

There's only one bad part in this story: Kory Heath hasn't had time to make Blockhouse 2.
But there is still hope, I guess.


©2013 Nicola Salmoria. Unauthorized use and/or duplication without express and written permission is strictly prohibited. Excerpts and links may be used, provided that full and clear credit is given to Nicola Salmoria and nontrivialgames.blogspot.com with appropriate and specific direction to the original content.
Posted by Nicola at 12:11 AM