Review: Sherlock, The Game of Logic for iPhone and iPad

Everett Kaser has been developing logic puzzles for PC and Mac for something like 20 years. There's a large number of games available on his web site; a couple have been ported to iPhone and iPad, and Sherlock is one of them.

To add complexity to the choice, the PRO and ULTRA versions run natively on iPad, while the Free version is designed only for iPhone.

The fact that the PC version is sold for $19.95, tells a lot about the impact of the App Store on the software industry. 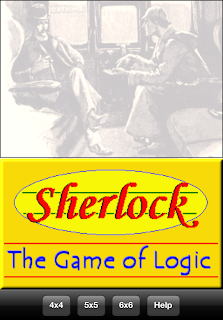 After starting the game, it's clear that this is a logic deduction puzzle in the vein of puzzle grids; however, it's quite obscure what you are supposed to do. 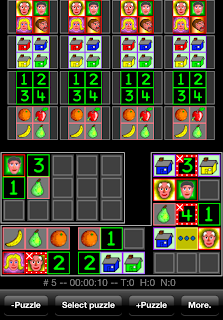 Unfortunately the Help button systematically crashes on my iPod, so I couldn't get guidance from that, but here is how I think it works: 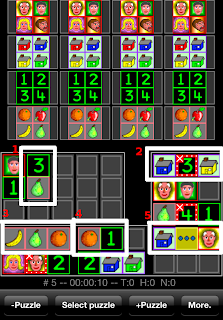 Once you understand the above, solving the puzzles requires straightforward elimination of possibilities; for example, because of 1), the Pear cannot be in the first or last column.
To eliminate possibilities, you tap on the columns to zoom in, then tap the item you want to exclude. To exclude all items except one, you tap and hold the one you want to keep.

In the end, you should be left with the solution: 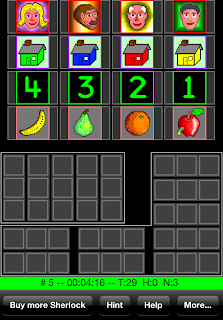 The puzzles are available in three sizes, from 4x4 to 6x6. 6x6 feels a bit crammed on the iPhone screen, surely it should play better on iPad. 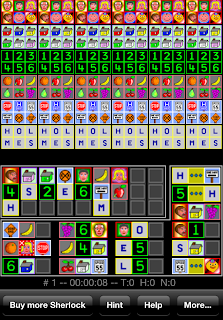 I think this game desperately needs a designer to make the interface clearer. At the moment, figuring out the rules is a puzzle in itself, and the user interface has way too many buttons and options.
Also, the graphics look 20 years old (and probably are).

The solving process is enjoyable but, despite the complexity of the clue system, feels somewhat mechanical. Would I want to solve 150,000 of these puzzles? Probably not.


©2013 Nicola Salmoria. Unauthorized use and/or duplication without express and written permission is strictly prohibited. Excerpts and links may be used, provided that full and clear credit is given to Nicola Salmoria and nontrivialgames.blogspot.com with appropriate and specific direction to the original content.
Posted by Nicola at 11:57 PM