Temple Trap (also free) by SmartGames is a port of the physical puzzle by the same name. 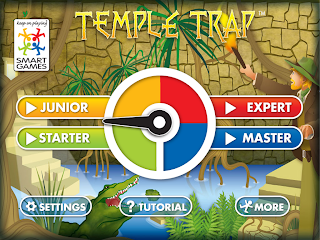 I have already talked about the inventor of this puzzle, the Belgian Raf Peeters, in my review of Roadblock.
It is a sliding tile puzzle, with the additional twist that the tiles also form a maze, that your character needs to navigate through. If it were just that, it wouldn't be very interesting, but there's a lot more.

The playing area is a 3x3 grid. The distinctive feature is that the maze is on two floors. Some tiles have stairs, which you need to use to move from one floor to the other. The exit is always on the top left, on the top floor. 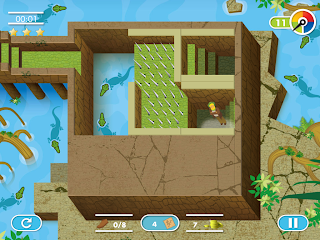 The one pictured above is one of the introductory puzzles, which is easily solved by just rearranging the position of the tiles, like this: 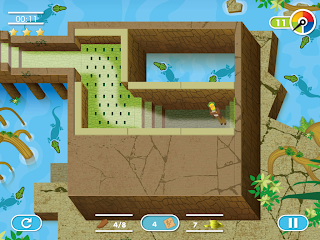 In general, however, there is an additional, crucial, rule that makes the puzzles a lor more interesting than that: you cannot move the tile that the explorer is standing on.

I would have liked the walking animation to be a little bit faster, because it can get a bit tiring having to wait for the explorer before being able to make the next move. Additionally, if you make a mistake you cannot make the explorer go back immediately: you still have to wait for him to reach the original destination before making him go somewhere else.

The game contains 110 puzzles, split across 4 difficulty levels. Each difficulty has a different theme: the easiest puzzles have a jungle/crocodile theme, matching the physical game, the others go from a tomb in the desert 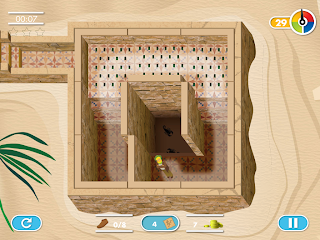 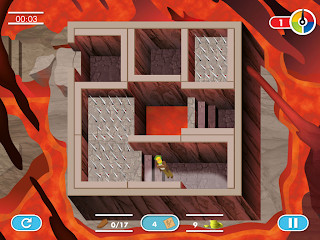 to high towers in the sky. 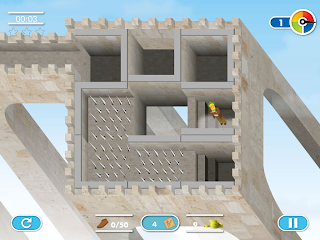 To be honest, I liked the jungle theme best, and I wouldn't have complained if it were used across the whole game.

One detail that annoyed me is a graphical imperfection during the transition from one puzzle to the next. The tiles become half transparent and you can see through them, which is odd and distracting.

After you solve a puzzle, you get a star rating which seems to depend only on the time taken and not on the number of moves. This is not particularly interesting, but it makes no harm since the stars aren't needed for anything. The one thing that is harmful, however, is the timed puzzles that have been forcibly added to the game. Every 10 puzzles, there's one that you must solve within a limited time. You can use coins collected in previous puzzles to increment the time. 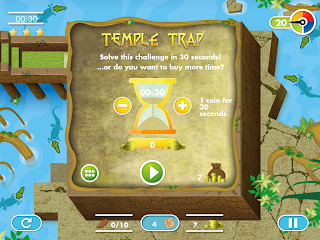 This might not be the end of the world for the easier puzzles, but when you get to the hardest ones... 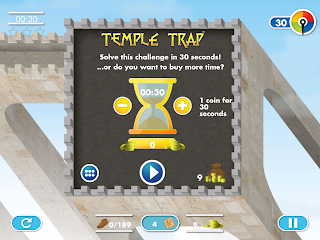 Come on, 30 seconds to solve a puzzle that requires at least 189 moves? You can buy additional time using coins that can be collected in other puzzles, but all in all this seems rather pointless. Thankfully, you can play the puzzles in any order, so you can just skip the timed ones if necessary.

I find it fascinating that a small 3x3 grid, thanks to the ingenious rules, can produce very challenging puzzles requiring up to almost 200 moves. That's way above the capabilities (and patience) of most people, but luckily there's a good number of puzzles at an intermediate level.

Solving the puzzles is an interesting process. Raf Peeters summarizes it well on his site:


Just like any other sliding puzzle, it's not that hard if you understand how a sliding puzzle works (but most people don't). The difference with other sliding puzzles is that harder challenges need to be solved in steps. Although you can use logic to find out what the end position of a challenge could be and it is not so difficult to slide the puzzle piece to to match this position, it can be very hard to get the pawn on the right place at the right time.

A word of warning: I couldn't get the game to run on a 4th gen iPod. It kept running out of memory and crashing. It works fine on an iPad Mini. So get the free version first, to make sure it runs on your device. The free version isn't particularly good at showing the qualities of the game, because it contains 10 of the easiest puzzles, which are just too easy, and then just one puzzle for each of the other difficulties. Still, it should be enough to understand if you like the mechanics.

©2013 Nicola Salmoria. Unauthorized use and/or duplication without express and written permission is strictly prohibited. Excerpts and links may be used, provided that full and clear credit is given to Nicola Salmoria and nontrivialgames.blogspot.com with appropriate and specific direction to the original content.