Review: The Mansion: A Puzzle of Rooms for iPhone and iPad

In 2006, a group of students of the Sungkyunkwan University, lead by Kim Jonghwa, developed an original game called Rooms. It can be played online on JayIsGames.
Later it became Rooms: The Main Building and was ported to several systems, but the iOS version is no longer available.
A sequel has now been released, called The Mansion: A Puzzle of Rooms, sharing the game mechanics, but with a completely different setting. 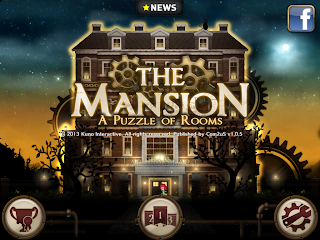 You control a girl, visiting a magical house: its rooms can move. Your goal in every puzzle is to reach the exit. 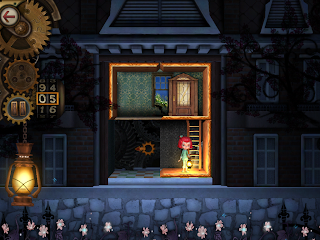 Being able to move only one tile is very limiting; it wouldn't be possible to make good puzzles with that alone. Therefore, the game needs to introduce several gadgets to make the puzzles interesting enough. They include:

a telephone, which teleports the girl to another room; 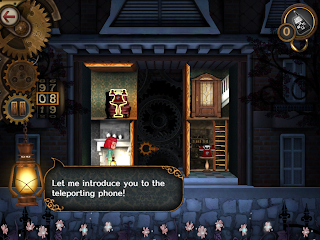 a magic closet, which swaps the two rooms containing the closet, leaving the girl where she is; 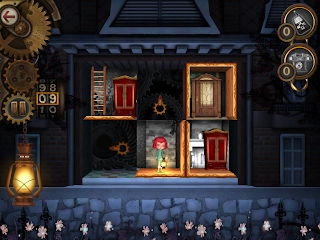 bomb boxes, which destroy wooden walls. You need to activate them, then leave the room before they explode; 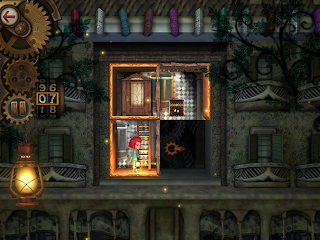 a magnet, which moves rooms on the same row/column;

and certainly others that I haven't seen yet (I only played the first half of the game so far).

Additionally, some of the puzzles also feature a puppet, which you need to avoid. The puppet moves around in a way which isn't clear at the beginning: later it is explained that it repeats the moves that you make.

The game is clearly targeted at a wide audience, so the puzzles are not too difficult, but they are enjoyable and thanks to the variety of gadgets they don't feel repetitive.

The playing experience is more that of a console game than a mobile game, with all the goods and bads. The presentation is good, it also includes many cutscenes to drive a background story, but the game feels heavy. From the moment you tap the icon, it takes more than 1 minute to actually start playing. You have to go through loading screens, splash screens, animations, player profile selection, and other screens until you can finally resume your previous game. This is the total opposite of the snappy mobile experience we are getting used to.

Also, while playing, the game's pace is a bit too deliberate, with animations delaying every action. It's ok, but it can become annoying when you have to replay a puzzle a few times to find the right solution.

Which raises an interesting point. This is a freemium game, so you can play it for free, but it will try to sell you all kinds of things. One of those things is the ability to replay levels many times. You have five keys, and every time you open a door to play a puzzle you use one of those keys. When you solve a puzzle, you get a key back. Otherwise, it takes 30 minutes for the key to recharge. If you use all keys, you have the option of spending coins to buy new ones, or you need to quit the game and come back later.

Now, this isn't the first game to feature this kind of timers, but it's something that has always struck me as odd. If I designed a game, I'd do everything I could to keep people playing it. The last thing I'd want to do is force them to stop playing. If you want to make people pay for the privilege of playing, you'd better be extremely good and give some motivation to play right now rather then tomorrow. I guess some games have that quality, but I doubt that The Mansion is one of them.
To be honest, the puzzles are easy enough that I never hit the 5 retries limit in my play sessions, so this isn't a big deal.

The other way the game has to sell things is by allowing to buy power-ups that make the puzzles easier. This would be fair enough, provided that you could get a perfect score in the puzzles without having to buy power-ups. Unfortunately this didn't happen in the initially released version, where a few puzzles required power-ups to get three stars. This has supposedly been fixed in version 1.0.5, though I'm not sure since I still have to find a working solution for level 2-11 :-)

There's a total of 72 puzzles, split across three mansions of 24 puzzles each, with more promised to come. In the first version of the game, getting three stars in all puzzles in a mansion would unlock the next one for free; this has apparently been changed now, so that you always have to pay to unlock more levels. That's perfectly logical and not a reason to complain.

I couldn't get the game to run on a 4th gen iPod: it always ran out of memory and crashed. It works better on an iPad mini, but it crashes often on that one too, to the point that I got tired of launching it again and again to take screenshots for this review.

The puzzles are nice, the presentation is very good, the freemium model we can live with, but the long delays and frequent crashes detract from the enjoyment. Anyway, what you get for free is undoubtedly a lot, so give it a try.


©2013 Nicola Salmoria. Unauthorized use and/or duplication without express and written permission is strictly prohibited. Excerpts and links may be used, provided that full and clear credit is given to Nicola Salmoria and nontrivialgames.blogspot.com with appropriate and specific direction to the original content.
Posted by Nicola at 10:10 PM