Review: Stroke! for iPhone and iPad

It's become very difficult to browse through the daily new releases on the App Store: there are just too many apps released every day. For me, the reward is discovering, every once in a while, an indie game made with very limited resources but a good idea behind. Stroke! is one of those. 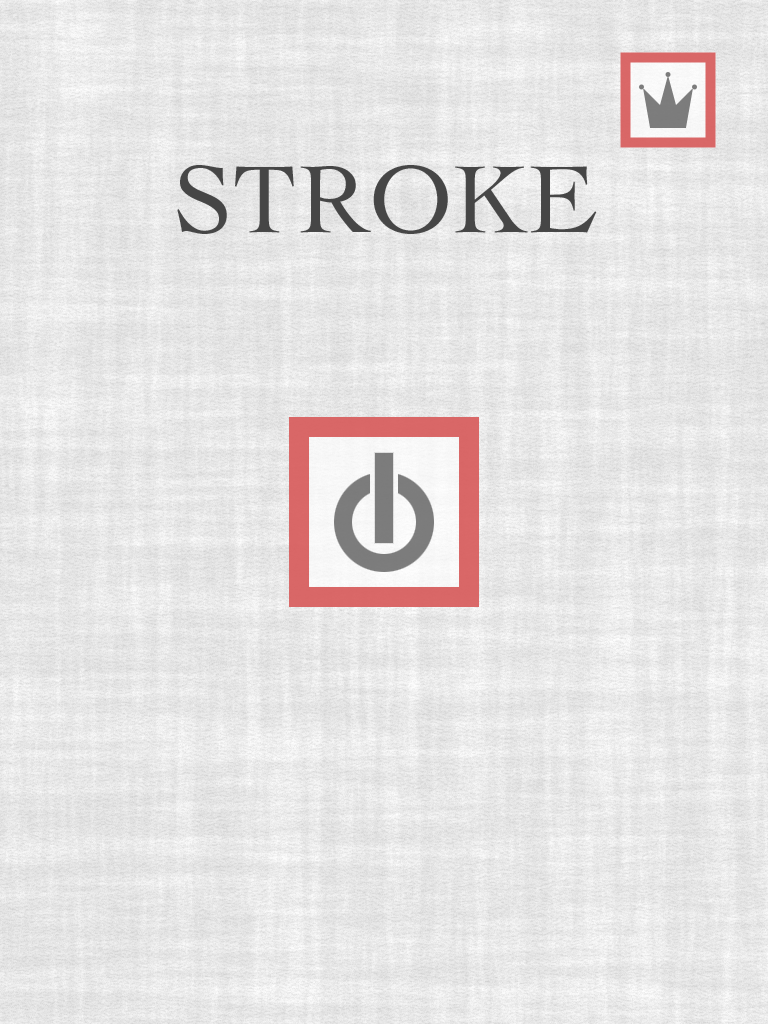 Developed by the Japanese Ryo Takanezawa, a puzzle lover who has many other puzzle apps under his belt, is one of those games that Tom Cutrofello calls "topology puzzles", and which I'd like to call "weakly constrained mazes". By that I mean that the goal of the game is to find a way through a maze where your movements are not limited by walls, but by other, less strict, rules.

In Stroke's case, the rules are that your path must go through every cell exactly once, and when you pass on a colored cell, the color must match a predetermined order. This is what it looks like: 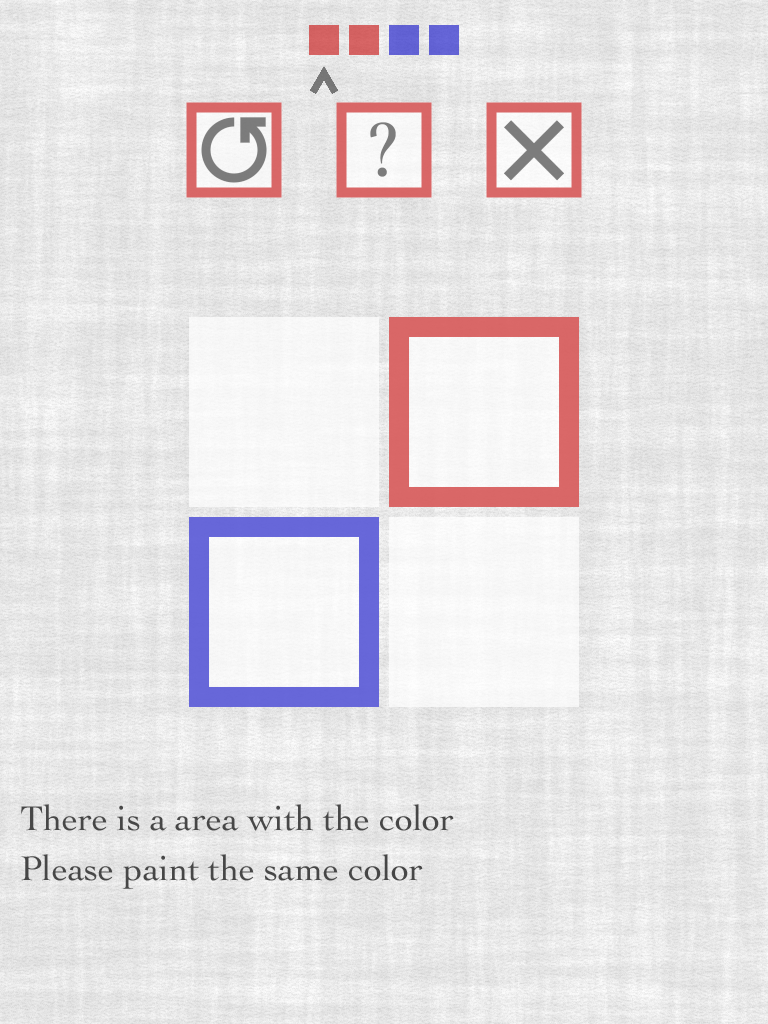 The row of squares at the top of the screen shows the color order. The arrow is pointing at the first square because you still have to make the first move. So your first move must be either on a red cell, or on a white one. Same with the second, while the third and fourth moves must be on either a blue cell or a white one.

I had seen puzzles with similar mechanics, where some cells contain a number and you need to go through the numbers in order. One of them is called Chemin, for example, but there are many others. Stroke, however, is notable because the clues are so vague and ambiguous. I think the greatest difficulty is that you don't know where to start. Luckily, if you get stuck, you can tap the question mark and the game will tell you where to start and end, which makes things a lot more straightforward: 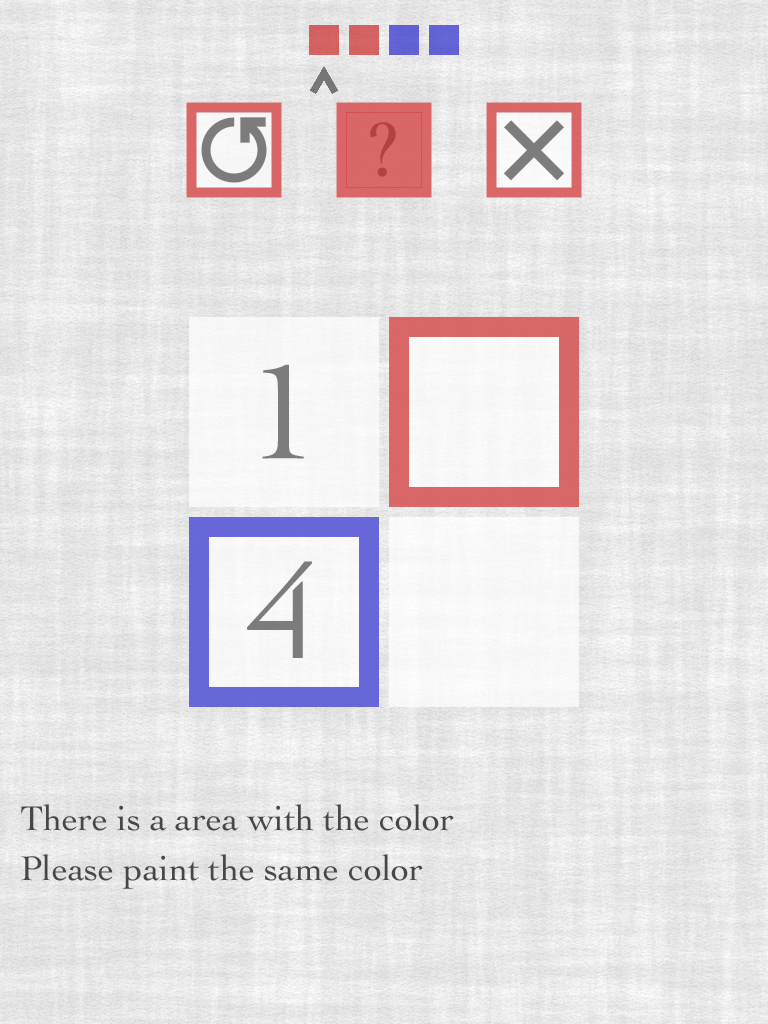 Of course the 2x2 example was easy, but as the size of the puzzles and the number of colors increase, they can get quite difficult to figure out. 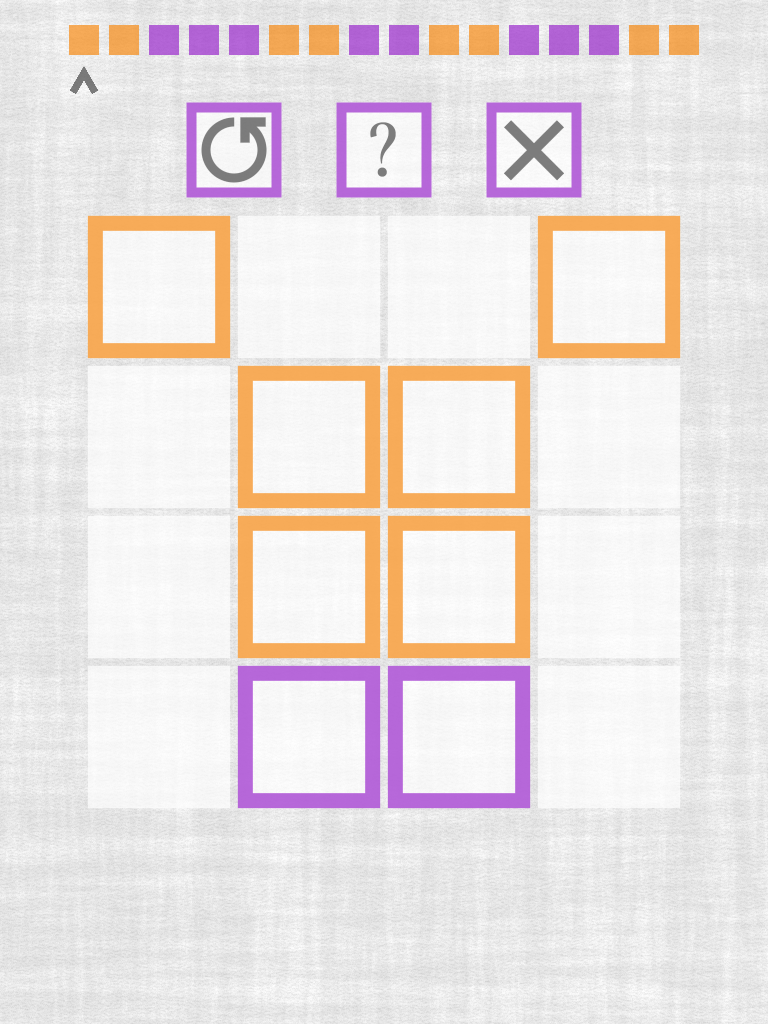 Note that the solution to the puzzles is often not unique, which makes them a lot less interesting to my eyes. Creating this kind of puzzles without caring about solution unicity is easy: you just pick a random path, select some random cells and assign them random colors. Done. Solving such puzzles, however, is often not as fun as it could be, because you can't use logic to guide you towards the solution. You cannot say "I must make this move because there is no other way to do it", because when there are multiple solutions, there isn't only one way!

The game contains a good number of puzzles, which are arranged in a "fractal" hierarchy. That is, the first pack has 2x2=4 puzzles of size 2x2,  the second has 3x3=9 puzzles of size 3x3, and so on. I got to 5x5, I'm not sure how many more there are.

After you solve enough puzzles, the game rewards you with two more buttons on the title screen, which lead to puzzles with different rules. 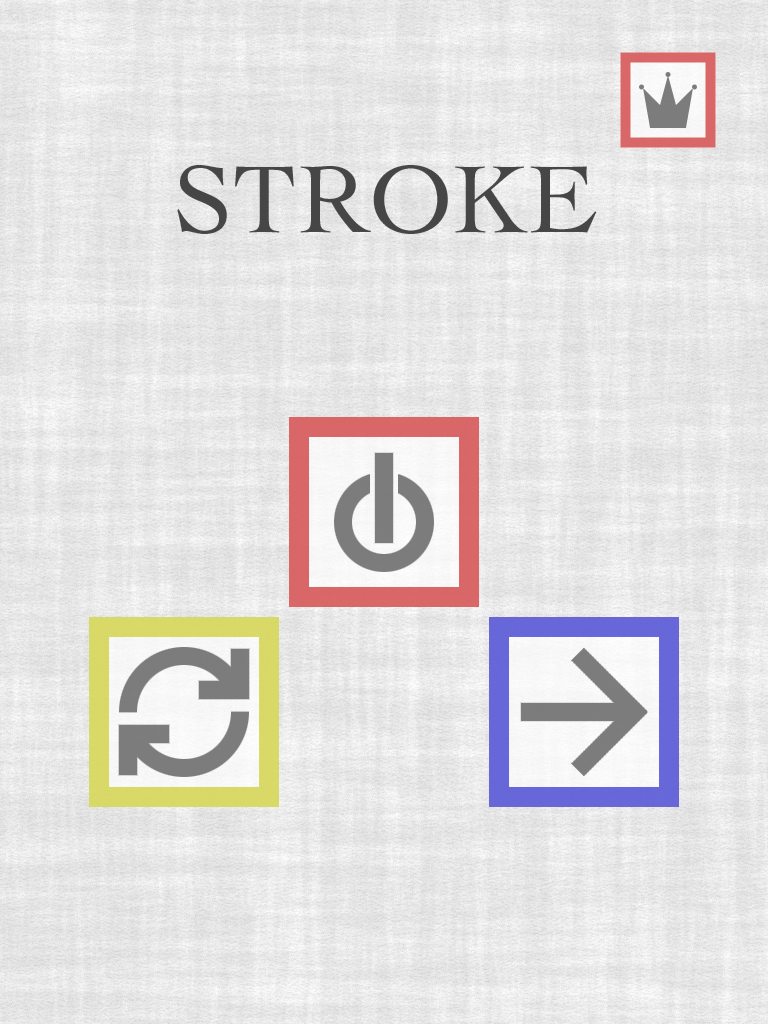 The blue ones contain cells with an arrow, which point in the direction that you must exit the cell. I think this adds very little interest to the basic mechanics. 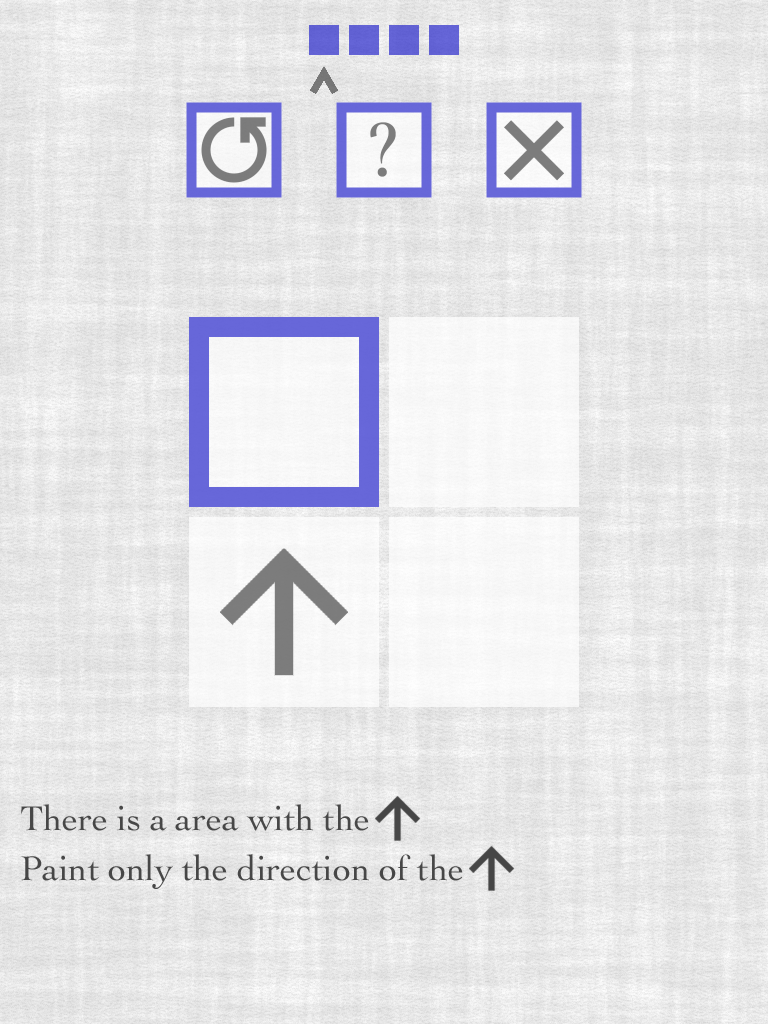 The yellow ones are a bit odd. They contain cells with a double arrow, whose effect is to swap two colors. 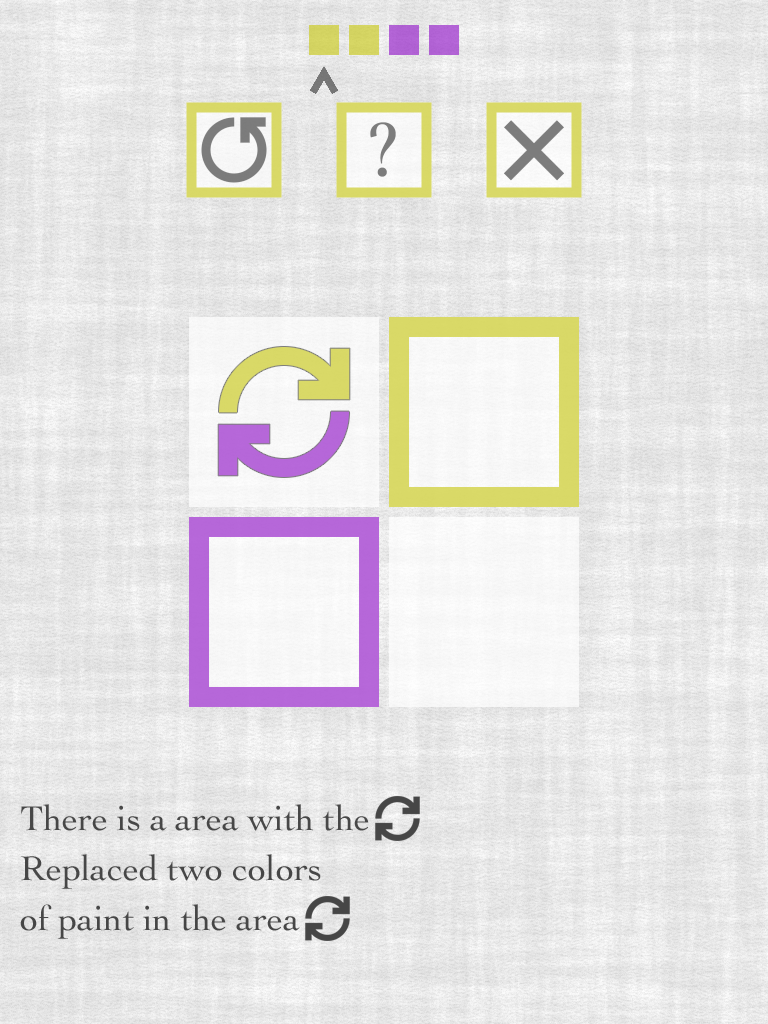 Initially, this seems pointless. Since you must travel through every cell, and the double arrow cell affects the whole board, the net effect is simply that you need to solve the puzzle pretending that the colors are already swapped from the beginning. This makes the puzzles more cumbersome to play, but doesn't really add anything. However, when you start having more than one double arrow on the board, things change because the order in which you pass over them changes the final order of the colors. 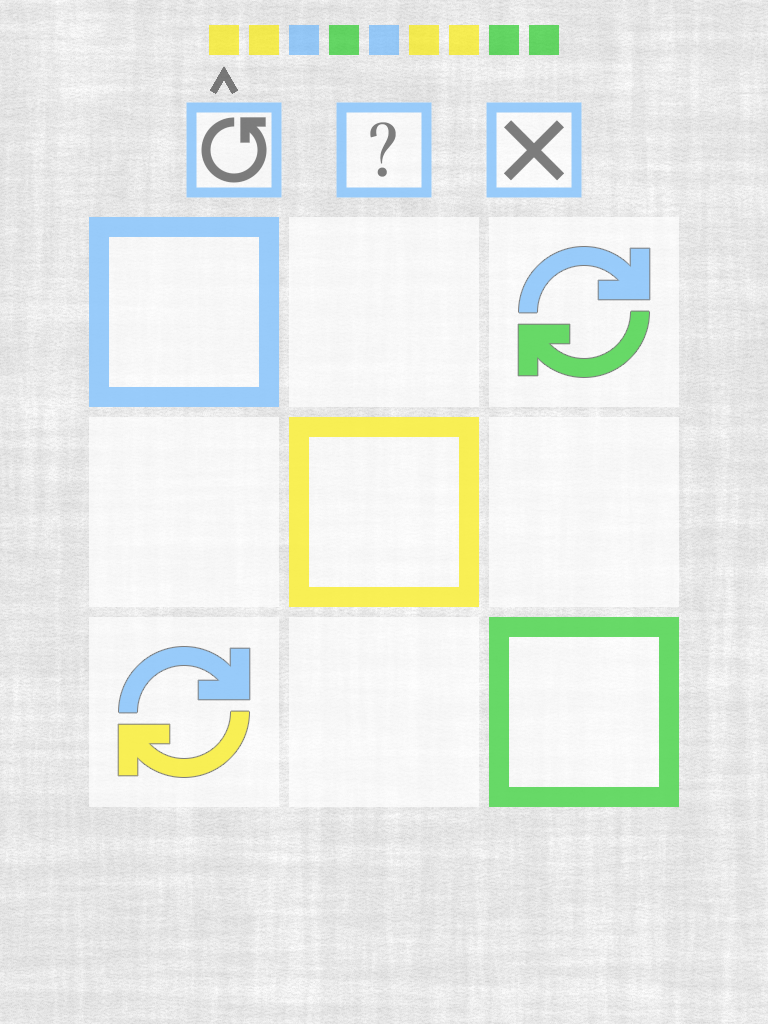 The user interface is quite poor. For starters, this is a iOS 7-only app, but it uses that skeuomorphic linen background, which I found a bit odd. Apart from that, the transitions, especially in the pack selection screens, are extremely slow, making it painful to navigate to the pack you want to play.

It's a tough battle, but this is possibly the most underrated game I've ever reviewed. When I tweeted about it. I was the only player on the Game Center leaderboards. There are still only nine players at the time of writing, so it can't really be called a success. While this surely isn't a masterpiece, I don't think it deserves such harsh results either. The mechanics are unusual enough to keep the puzzles interesting for a while, and they are challenging even at small sizes. Worth a try. Yes, even if it's so expensive. If you do try it, please leave a comment and let me know what you think about it.


©2014 Nicola Salmoria. Unauthorized use and/or duplication without express and written permission is strictly prohibited. Excerpts and links may be used, provided that full and clear credit is given to Nicola Salmoria and nontrivialgames.blogspot.com with appropriate and specific direction to the original content.
Posted by Nicola at 1:52 AM