Pokergreens is not quite "the next Sudoku", as its author Ronald Stewart calls it, but it successfully manages to mix the mechanics of classic pen-and-paper puzzles with the rules of poker. 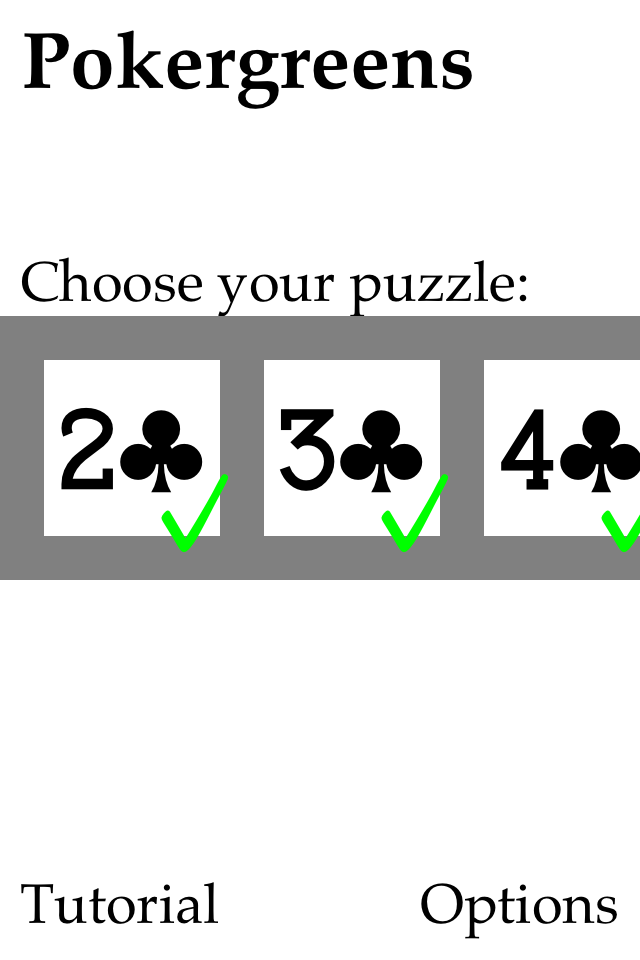 This is the kind of puzzle game that was common in the early days of the App Store: a simple, lackluster user interface, but very clever mechanics. It reminded me of games like CounterbalancE and Combination, which I reviewed when I started this blog.

Here is how it works: you are given a few cards laid out over a 5x5 grid, and for every row and column you are told what kind of poker hand it should contain. At the bottom of the screen you have the cards to use . The solution is always unique. 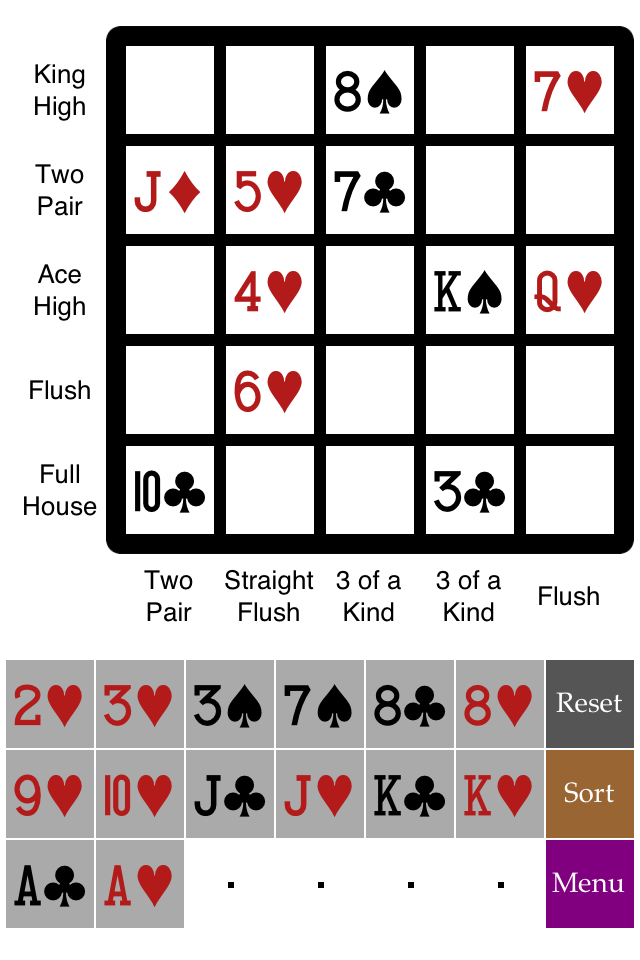 The great thing about this concept is that the each type of poker hand provides different information, so you need to come up with all kinds of logic deductions to make use of it. This is quite different from Sudoku, where the rule is always the same.

For example in the puzzle above, the second row needs to contain two pairs. There are no 5s available, so the pairs must be two 7 and two Jacks. The last column must be a flush, so all cards must be hearts, so the 7 of spades cannot go there; similarly, you can't put there the Jack of clubs. The only possible combination is therefore this one: 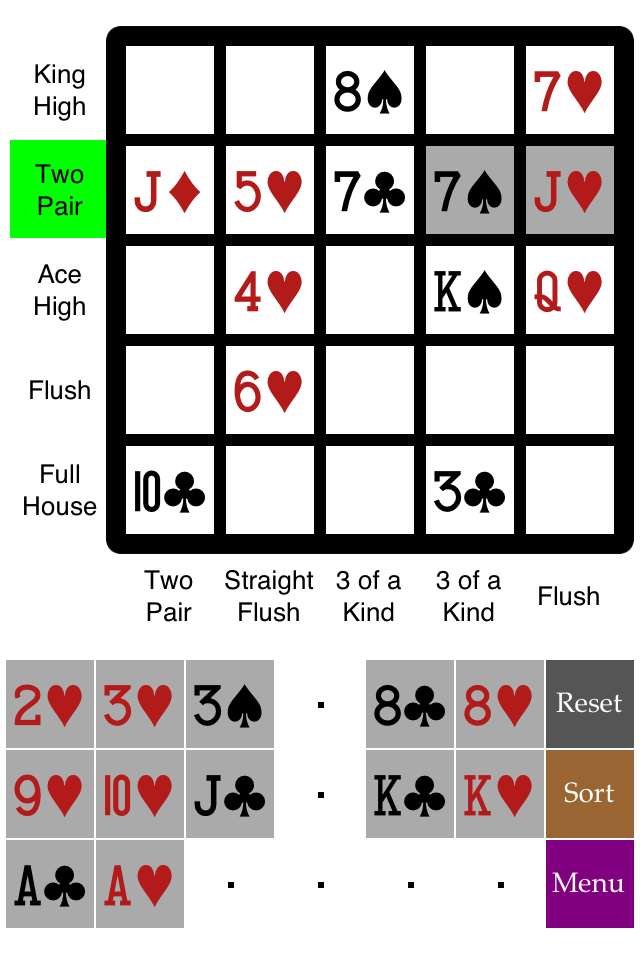 Applying only rigorous logical deductions like this one, you always arrive at the unique solution.

The game also has a tutorial to introduce you to the rules, though I found it a bit confusing and lacking focus. It starts like this: 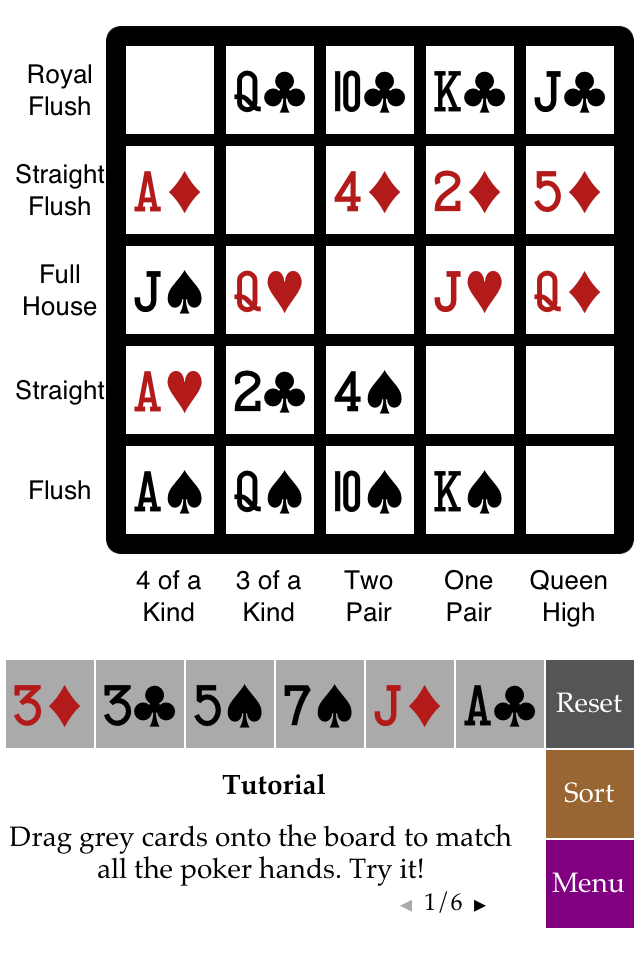 So I diligently followed the advice, placing cards on the grid, not noticing that after a single move the message at the bottom had already changed: 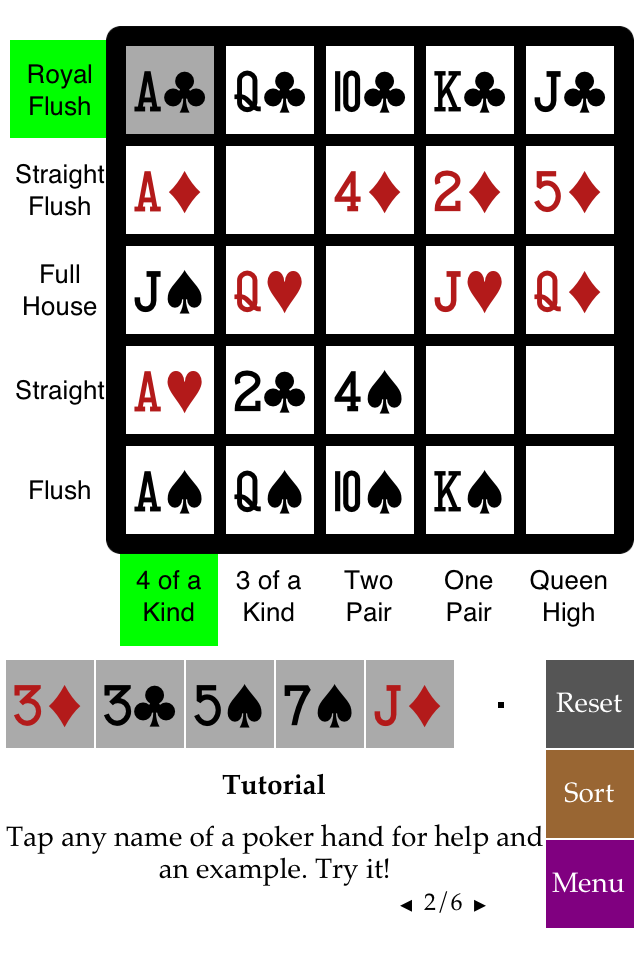 The information about the poker hands is actually well done, and interactive: you can try bringing any of the three cards over the question mark, and it will tell you what kind of hand you created. 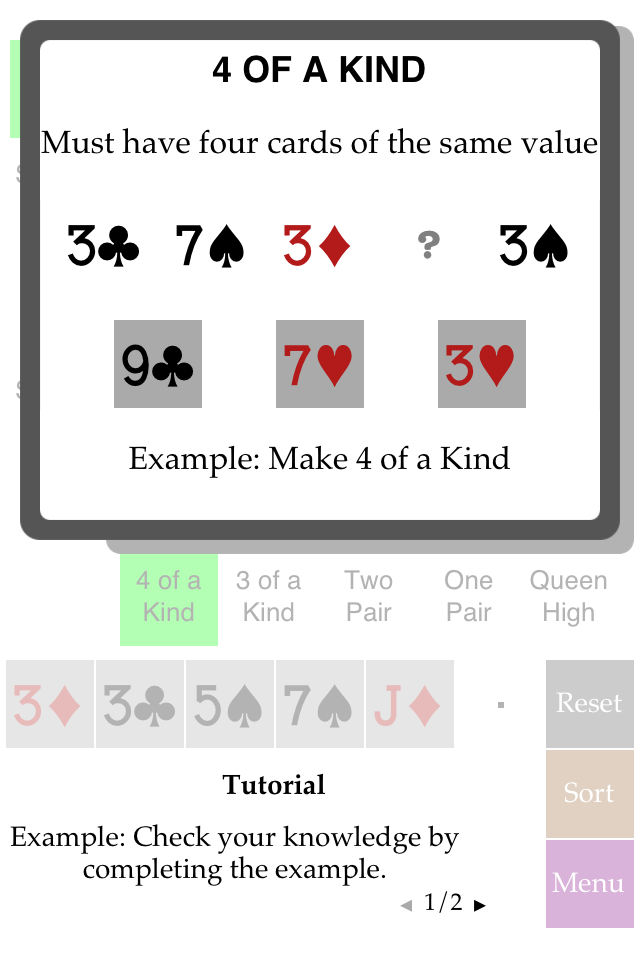 This concept is not new, though I haven't found any other app on the App Store implementing it. I found a couple Windows apps, called (no prizes for originality) Poker Sudoku, and Sudoku Poker. They appear to be very similar, though from the screenshots it looks like a high card hand is simply called "High", without specifying which card is the highest. In Pokergreen, you are told whether the high card is an Ace, or a King, etc. Many logic deductions can be based on that additional information.

The oldest mention I could find of this concept is in the 1999 World Puzzle Championships, as reported on janko.at. Note that in that case you are also told the hand in the two major diagonals, while you are not told which cards to add to the grid (you have a 28-card set and need to leave out 3 cards). Again, I prefer the Pokergreen version, because not relying on the diagonals is more elegant, and knowing which cards to use is more intuitive and allows for more deductions.

I found another interesting one on a New York Times blog, which also has a detailed step-by-step solution by Nick Baxter. The interesting thing about that one is that some clues only show the suit of the card, others only its value. That's a nice twist that I don't think Pokergreens implements, even in the later puzzles.

The user interface of the app works well, though it could use some improvements. I think the most obvious shortcoming is the lack of a proper reward for solving a puzzle. You just get a standard iOS alert, which looks more like an error message than a reward. Some celebratory animation would be in order here.

The solved alert says the time it took you to solve the puzzle and, oddly, gives no way to move to the next puzzle. You have to go back to the main menu and pick a new one. The puzzle selection is odd too, using a horizontally scrolling list.

The time taken also doesn't seem to be paused when you send the app to the background, so in a few cases I was told it took me hours to solve the puzzles, which certainly wasn't true.

Another thing I disliked about the user interface is the behavior of the Sort button. It cycles among many different ways to sort the cards, when sorting by value first, suit second, or suit first, value second would have been more than enough.

The game contains 13 free puzzles, which are not many but should be enough for at least an hour of play, because it takes a few minutes to solve each one. You can buy more puzzles using in-app purchases, but that's implemented in a strange way: you can only buy the "next" 13 puzzles, without being able to see a list of how many packs are available or their difficulty, and no option to buy multiple packs at a discount. I think this is something that needs to be addressed to allow the users to make informed purchases.

In the meantime, if you like strict logic puzzles, this is definitely one to try.


©2014 Nicola Salmoria. Unauthorized use and/or duplication without express and written permission is strictly prohibited. Excerpts and links may be used, provided that full and clear credit is given to Nicola Salmoria and nontrivialgames.blogspot.com with appropriate and specific direction to the original content.
Posted by Nicola at 1:03 AM