Review: Fields for iPhone and iPad


Fields by Kevin Langdon is a restyling of the classic Fillomino logic puzzle, which is published by many magazines. 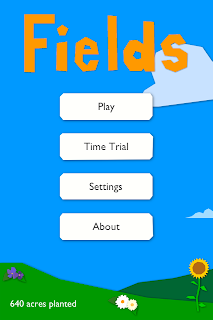 I like when developers take their time to rethink how a classic puzzle is played, in order to make it work better on a touch screen.
On paper, Fillomino is typically played by filling with lines and numbers a white grid, like this image taken from janko.at shows.

This works on a magazine, but it would look pretty boring on an iPhone screen. Fields adds colours, by associating each number with a flower (except for 1 which becomes just rocks).
To fill an empty cell, you just drag from a populated cell nearby. The goal is to completely cover the grid with flowers, in such a way that the size of each area matches the numbers given. So in the image below, we want to have 4 sunflowers and 2 violets. 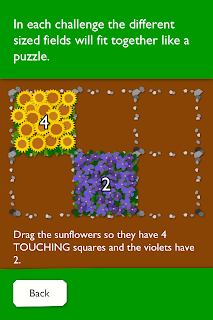 The puzzle above clearly has two solutions. I had hoped that this was just because it is part of the tutorial, but unfortunately it happens on normal puzzles as well, like this one: 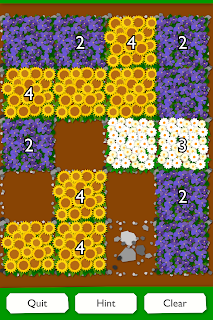 Here you can see that there are two ways to complete the 3 field, and both lead to a valid solution.

This is a major letdown for a puzzle like Fillomino. These puzzles must have a single solution to be fun.

Currently, Fields contains 100 puzzles of various sizes, from 4x5 up to 8x11. 8x11 feels a bit tight on iPhone and you need to be careful where you touch, but it's still playable. 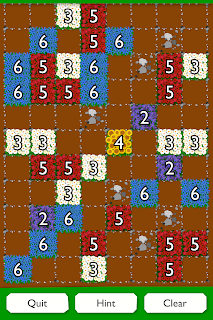 Like other puzzles released recently, the game is free and offers the ability to buy hints through in-app purchases.

Fields makes me a bit sad. It has a good user interface, much more enjoyable than other ports of Fillomino, but some of the puzzles are sub-par due to the multiple solutions. Luckily, this shouldn't be too difficult to fix in an update.

Update 10th June 2013: the issue of multiple solutions has indeed been fixed in an update.


©2013 Nicola Salmoria. Unauthorized use and/or duplication without express and written permission is strictly prohibited. Excerpts and links may be used, provided that full and clear credit is given to Nicola Salmoria and nontrivialgames.blogspot.com with appropriate and specific direction to the original content.
Posted by Nicola at 12:03 AM