Subway Shuffle is a classic. It was first released in August 2008, just a few weeks after the App Store opened. It is so old that people didn't consider an outrage its initial price of $2.99 (don't worry, it's $0.99 now). It's impressive how much things have changed in these 5 years.
The web site linked to by the App Store, www.subwayshuffle.com, doesn't even exist anymore, though we can still look at it on the Wayback Machine.

The game was created by +Bob Hearn, an MIT graduate whose thesis is suitably titled Games, Puzzles, and Computation. It's full of interesting material and well worth a read for anyone interested in complexity theory. 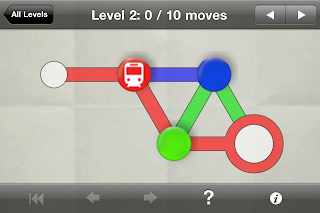 The goal is to move the red car to the big red circle. To do that, you move one car at a time, with the constraint that cars can only move along edges of their same color.


The layouts are aesthetically pleasing, and nicely represented by thumbnails in the puzzles list.
The puzzles look deceptively simple, but solving them can be harder than it seems. 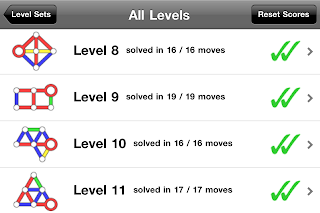 Every puzzle shows the optimal number of moves needed, and you get a double tick for matching it.

Most puzzles are planar, but some have intersecting routes: 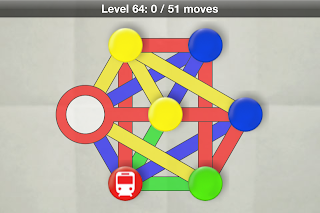 There is a total of 100 puzzles. The difficulty escalates in the last few, with Level 100 needing 589 moves. If you want to have a go at it, good luck. 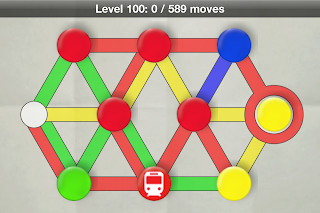 This game is a must have, but if you have doubts, there's also a free version, Subway Shuffle Lite. It containins just ten sample levels. I'm pretty sure that after trying them, you'll want the full version.


©2013 Nicola Salmoria. Unauthorized use and/or duplication without express and written permission is strictly prohibited. Excerpts and links may be used, provided that full and clear credit is given to Nicola Salmoria and nontrivialgames.blogspot.com with appropriate and specific direction to the original content.
Posted by Nicola at 5:41 PM