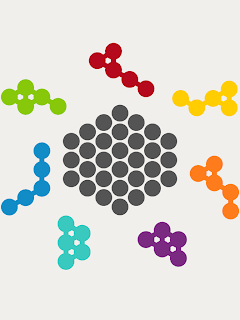 Looking on the internet I could find many polyhex tiling puzzles, but didn't find this particular one, so as far as I can tell it's an original variation. The obvious question I have is how were the 7 pieces chosen. Also note that two of them are repeated, so out of the 22 pentahexes, you are effectively using only 5.

Update: Eric Wolter informed me that the game is a port of a physical puzzle which was sold as "Fantastic Island" or "Atom puzzle". It's patented, but the patent has expired: #4988103.
In the physical version, the puzzle pieces can also be arranged in 3D space to build tetrahedra. 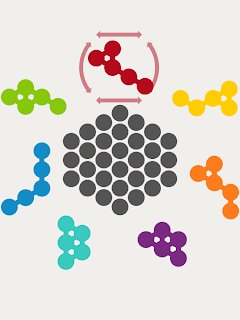 I didn't like that while you rotate the piece it snaps to 60 degrees steps. It would be more fitting for an iOS device to smoothly follow the gesture and then snap to a 60 degrees multiple only after you lift the finger.

Not being a tiling puzzle expert, I found this puzzle quite challenging. After playing for several minutes, I hadn't found a single solution. This is not bad for a puzzle that has only 7 pieces.

Unfortunately, that's literally all there is to it. There's no menus, no buttons. You get nothing more than you would get by cutting the pieces out of cardboard and playing with them on a table.

The App Store description says there are over 40 unique solutions, and challenges you to find all of them; but since the game doesn't track the solutions you found, it's impractical to do that.

At the moment, this is nothing more than a proof of concept and I find it hard to justify it being a paid app. With some improvements, it could become more interesting.

Update September 29th: Eric Wolter kindly contacted me to mention that he's planning to include many improvements in a future update. Watch this space.


©2013 Nicola Salmoria. Unauthorized use and/or duplication without express and written permission is strictly prohibited. Excerpts and links may be used, provided that full and clear credit is given to Nicola Salmoria and nontrivialgames.blogspot.com with appropriate and specific direction to the original content.
Posted by Nicola at 12:56 PM