Review: Threes! for iPhone and iPad

People who follow me on Twitter had already seen the heads-up about Threes!, the latest puzzle game by Sirvo LLC. 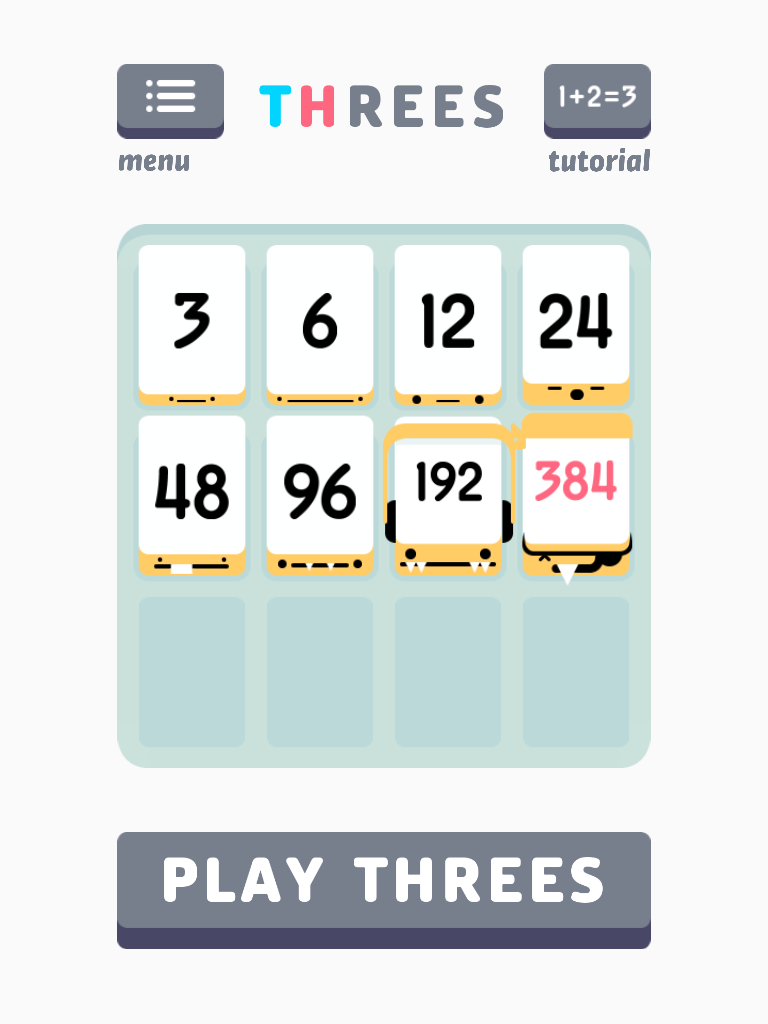 I wasn't the only one to notice this game, since it quickly climbed to #1 in the App Store charts, proving to be a perfect casual game. But is it also a good game for readers of this blog?

The mechanics are beautifully explained by the official trailer, which is just too good not to repost it here:

You have a 4x4 grid, containing some tiles. All tiles have a number of them.
Your moves consist of just swiping the screen, which makes all tiles move by one step in the same direction. When a tiles reaches the edge of the board, it stops. When pushed against each other, tiles will merge if they are identical (forming a new tile of double value) or if they are 1 and 2, which will produce a 3. 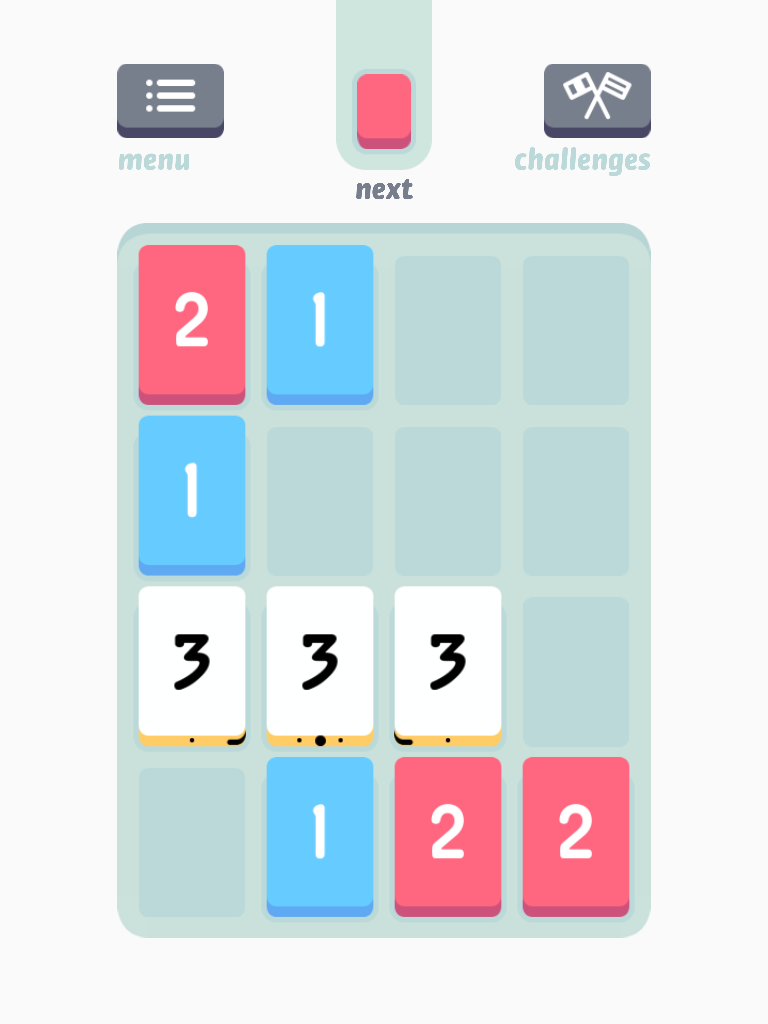 The other thing that happens when you make a move is that a new tile enters the board, at the end of one of the lines that moved. So you must keep merging tiles to make space for the new tiles. When the board is full and you can't make any more merging, it's game over.

The color of the tile you'll get next is shown at top of the screen, so you know for sure if it's a 1 or 2, but if it's white it could be anything, though it will usually be a 3.
In general, you also don't know for sure the exact line where the tile will be inserted, unless all lines but one are blocked.

Note that since all the tiles you merge remain on the board, the value of the tiles keeps increasing during the game, so after a typical game you'd be in a situation like this: 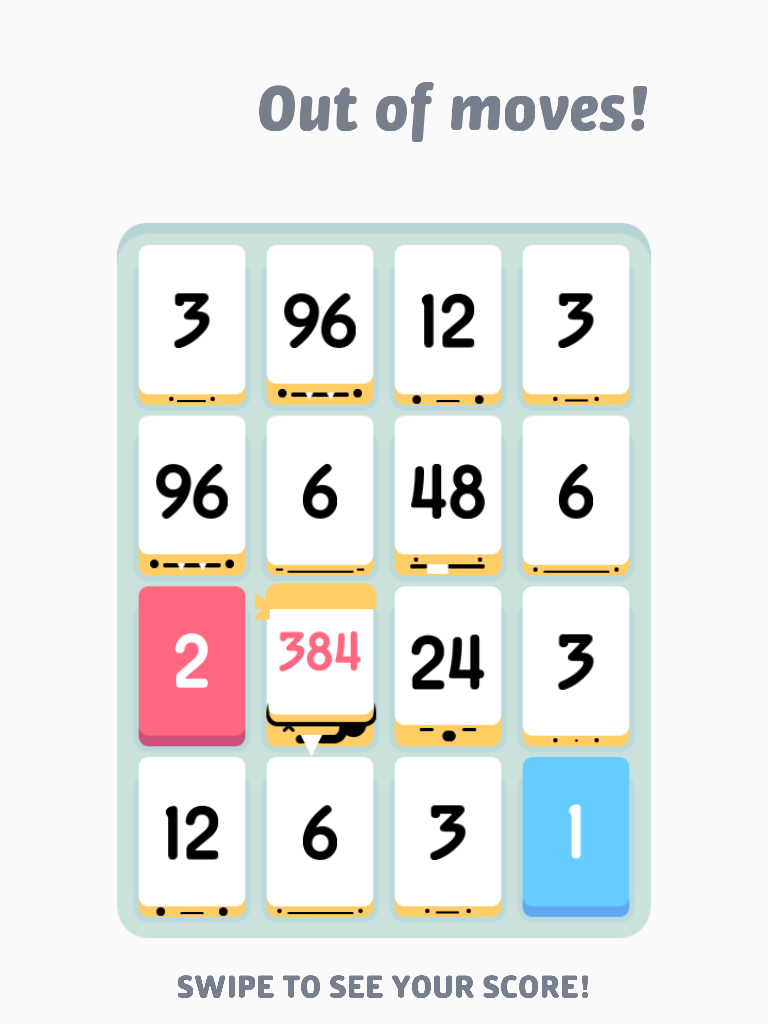 If you play well, 384 is the number you should be aiming to reach frequently. So far, a few people have managed to make a 768, but nobody has yet reached 1536 (apart from one person that hacked the game). The maximum tile available in the game is 6144. I don't think anybody will see it anytime soon. It would take 2048 3's to make one 6144.
The value of the highest tile is important because the score you get at the end of the game grows exponentially with the tile value, so one 384 is worth more than two 192 and so on.

Even if the mechanics are significantly different, I can't avoid comparing Threes! to Stickets, another excellent game released last year. Both games are played on a small board, and alternate moments of increasing tension, as the board fills up, with moments of relief, when you make a streak of matches and free up a lot of space.

More than the pure mechanics, I think there are two important differences between the two games:
In my opinion, Stickets' lack of a definite end was its limit, because a game could take such a long time that after taking days to finish a game I couldn't find the motivation to start a new one. In Threes!, I have the opposite problem: after losing, it's difficult to resist the urge to start a new game :-)

I don't like, however, the excessive use of randomness, which appears unfair at times. It is particularly infuriating when you have planned your moves to accomodate a white tile, and then you get a 48 instead of the 3 you expected. I think this part of the randomness is uncalled for and I'd hope it to be changed in a future update.

I usually focus on the mechanics and don't talk much about the presentation, but in this case I need to spend a few words to say how good it is. All the tiles have subtle animations and have different personalities, making the game cheerful to play. The graphics might seem simple, but a very interesting article on Polygon shows how much work went into them and how many failed attempts were made before reaching the final result.

For me, the most notable achievement in the presentatin is the sound design. More often than not, I play puzzle games with sound turned off, but not this one. The background music is superb—I've been humming it all day—and the way how the tiles talk to you while you play, each one with its own personality, keeps the game lively.

A word of warning: the game currently doesn't work on 4th Generation iPod, it crashes before even reaching the title screen. Hopefully this will be addressed in a future update.

Apart from that, there is no reason not to buy this game immediately. It will definitely be one of the best games of the year.


©2014 Nicola Salmoria. Unauthorized use and/or duplication without express and written permission is strictly prohibited. Excerpts and links may be used, provided that full and clear credit is given to Nicola Salmoria and nontrivialgames.blogspot.com with appropriate and specific direction to the original content.
Posted by Nicola at 2:04 AM