Pair Solitaire by Vitaliy Zlotskiy played a nasty trick on me. I got my best score on the very first game, and haven't been able to replicate it since. 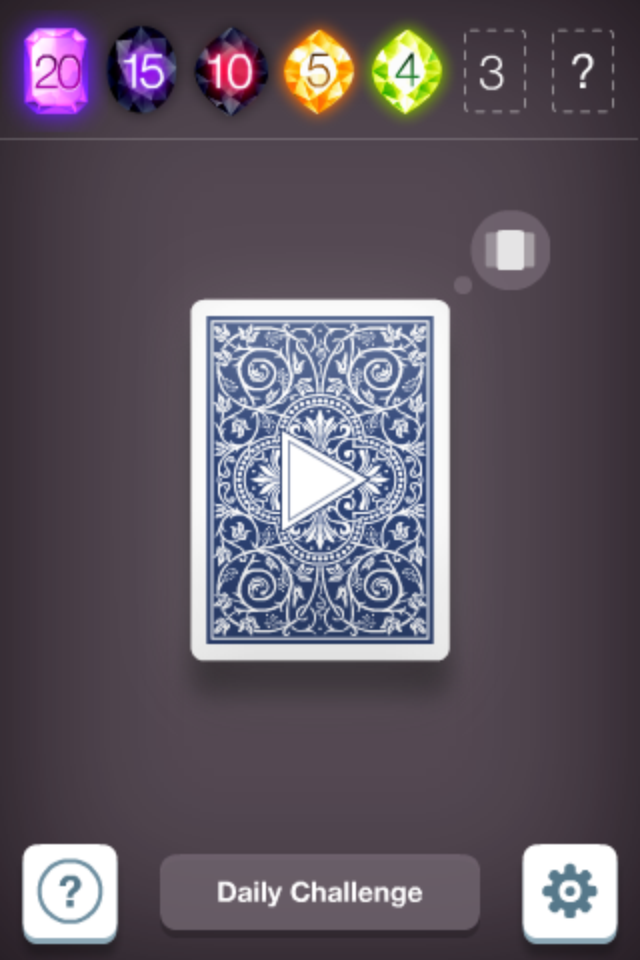 I like this game because even if it has the mechanics of a classic card solitaire, luck is not particularly involved. At the beginning, you have full knowledge of the position of all the cards, so it can be approached like a puzzle.

The goal is pretty simple. All 52 cards are put in a single line. You have to remove them one by one, until you have no more valid moves to make. 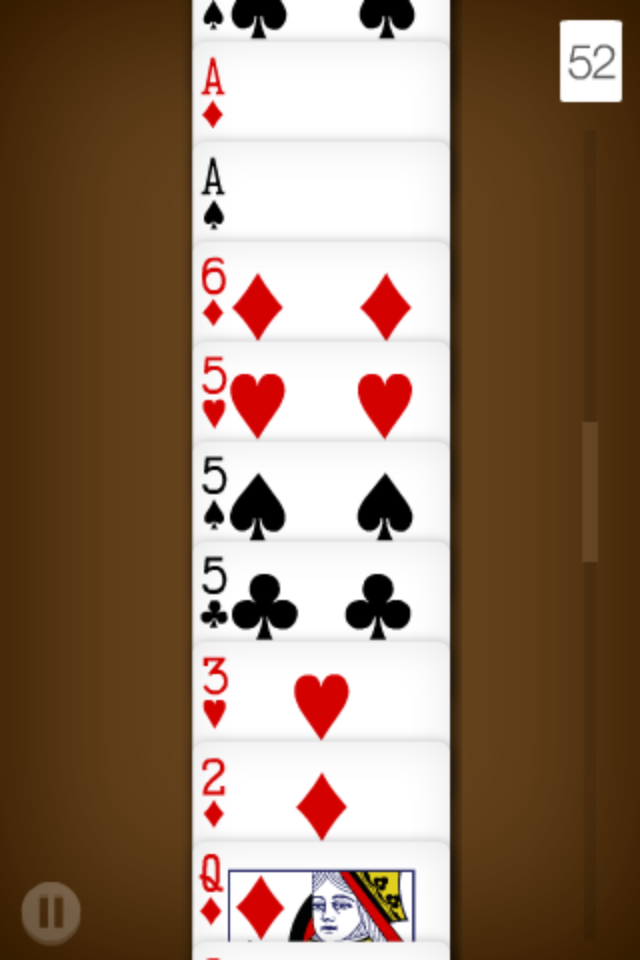 A valid move consists of removing a single card which is the same suit or same value of another cards two places away from it.

When you're out of moves, the game calculates a score which depends on how many cards you removed, and on which specific ones (aces are the most valuable). Note that if you manage to remain with just two cards, they can't be removed because there is no longer a card two places away. So even if that means "finishing" the game, you won't necessarily get the maximum score. The maximum score would be when you remain with just two 2s.

I'm not sure it this is an original idea or a solitaire with these rule already existed. It might be original, because this is the kind of game that would be inconvenient to play with a real deck of cards, while it works very well on a digital device.

There are many things in the style of the tutorial, user interface, and promotional material that remind of Threes!, and indeed Asher Vollmer is mentioned in the credits.
The user interface is nice, and I liked that you can also play in landscape mode. 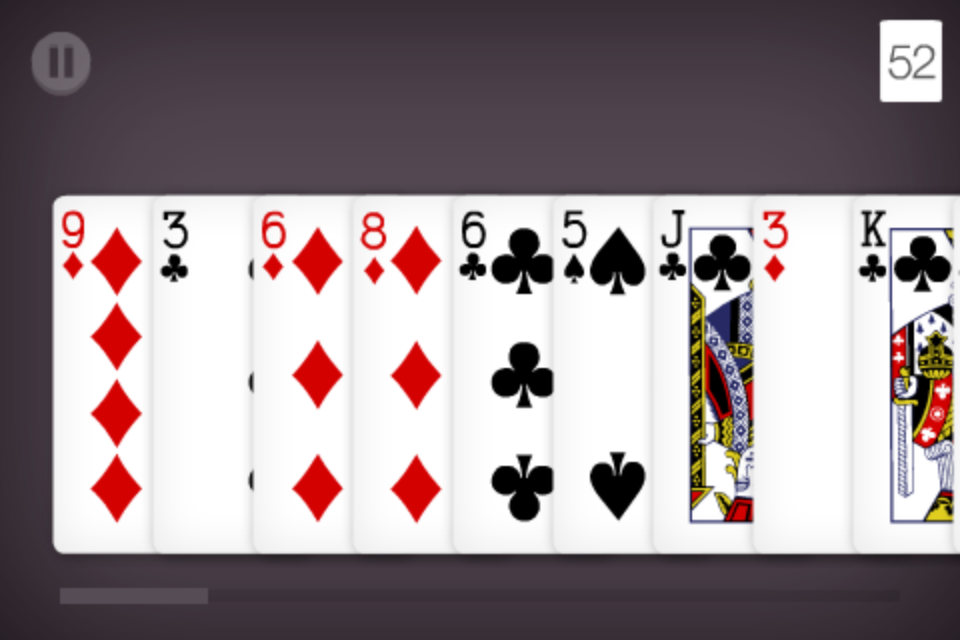 There is however an annoyance in how touching a card and then scrolling is handled. The iOS convention is that in such a case the touch should be cancelled, and only the scrolling performed. In Pair Solitaire, instead, if you touch a card that can be removed and then scroll, the card will be removed anyway. This is more of a problem in landscape mode since when playing in portrait you'll tend to scroll by touching the empty background rather than the cards. It's not the end of the world because you can undo your last move (and only the last one). But it breaks the flow.

The game is free, but with a single in-app purchase you can unlock extra features like additional decks of cards and, more interestingly, the ability to compete on a daily challenge. In this game mode, all players are given the same shuffle of cards, and two attempts to make the best score. The following day, you can see the best 50 scores. Actually this doesn't seem to always work, since sometimes instead of  the scores all I get is a cross. 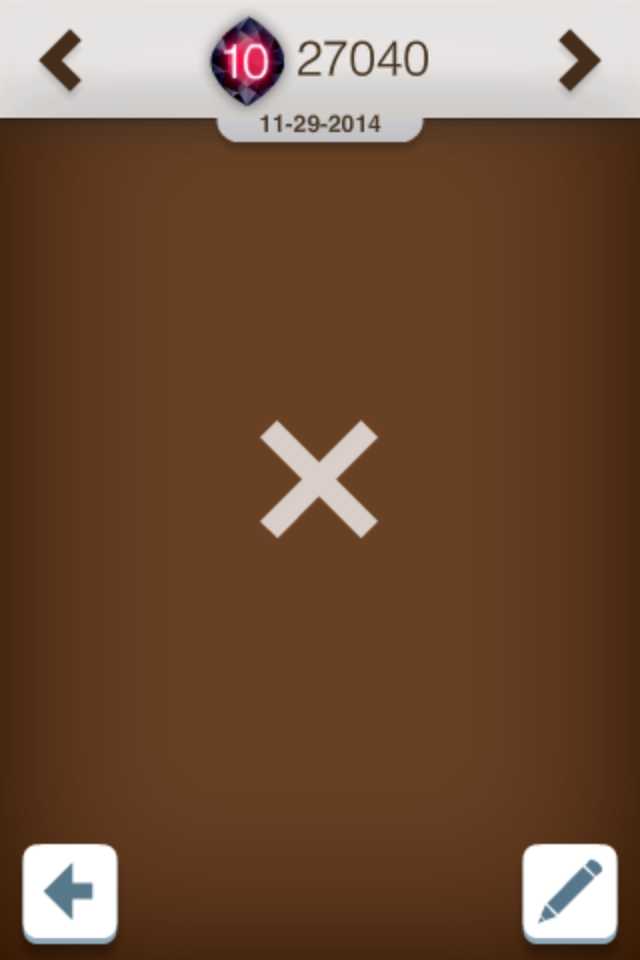 I suspect this might happen when your score isn't among the best 50, but if that's the case, it doesn't make sense. Surely even if my score was lousy, I should be able to see what other people did.

The funny thing is that I don't quite see what a good strategy could be. In a stroke of beginner's luck, I got my best score so far (remaining with just 4 cards) in the very first game I played. So I thought well, this is a nice game but it's a bit too easy. I haven't repeated that yet.
Looking at the results of the daily challenges, some people regularly end with just 2 cards, so clearly a good strategy must exist.

My main complaint is that when you quit the app, the current position isn't saved and you need to start a new game. I would like to be able to resume from where I left.
This is certainly a good addition to any collection of puzzle games. Thanks to the limited length of the games, it's perfect to play on short commutes.


©2014 Nicola Salmoria. Unauthorized use and/or duplication without express and written permission is strictly prohibited. Excerpts and links may be used, provided that full and clear credit is given to Nicola Salmoria and nontrivialgames.blogspot.com with appropriate and specific direction to the original content.
Posted by Nicola at 7:06 PM