Train shunting is a classic puzzle genre, but for some reason the App Store seems to be lacking that kind of games. The recently released Andy's Trains attempts to fill that void.

The game's title screen surprises, showing an animated railway full of switches, semaphores, and tunnels, where several trains are presumably on their way to solve some complicated puzzle. 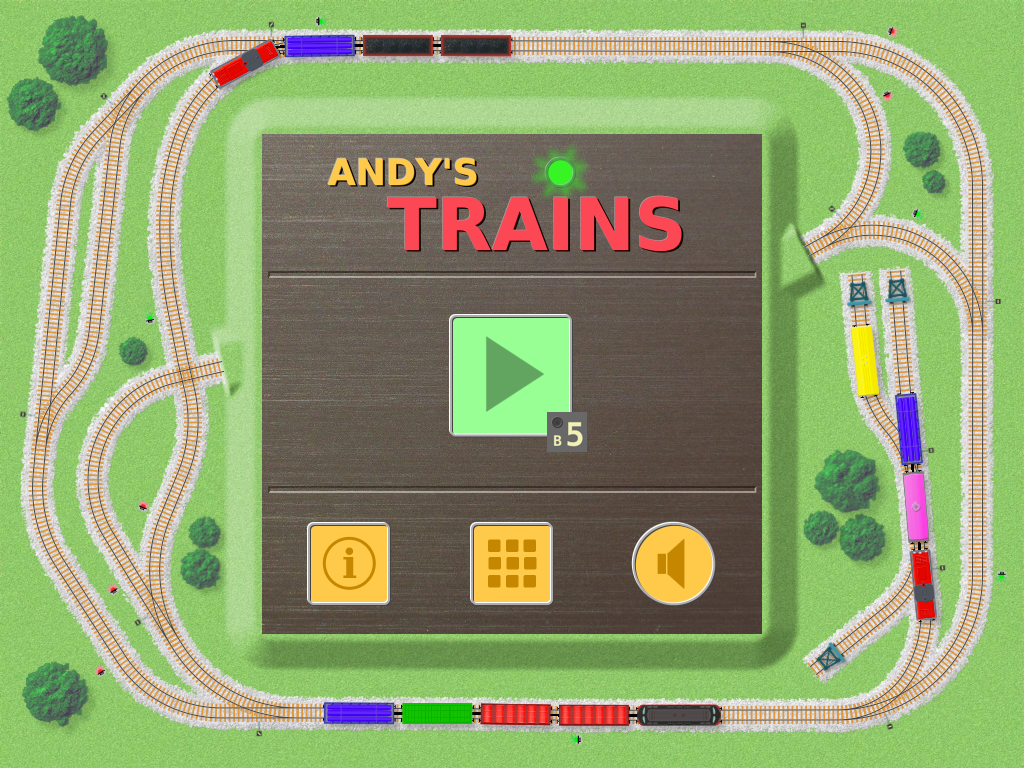 Developed by the German Andreas Guenther, this is clearly a work of passion, and even if it looks a bit amateurish in places, or perhaps precisely because of that, it stood out amonge the weekly deluge of new puzzle games.

The objective is a standard one for shunting puzzles: you need to operate a switching engine to move rolling stock around the tracks, bringing them to a given destination, in the required order. 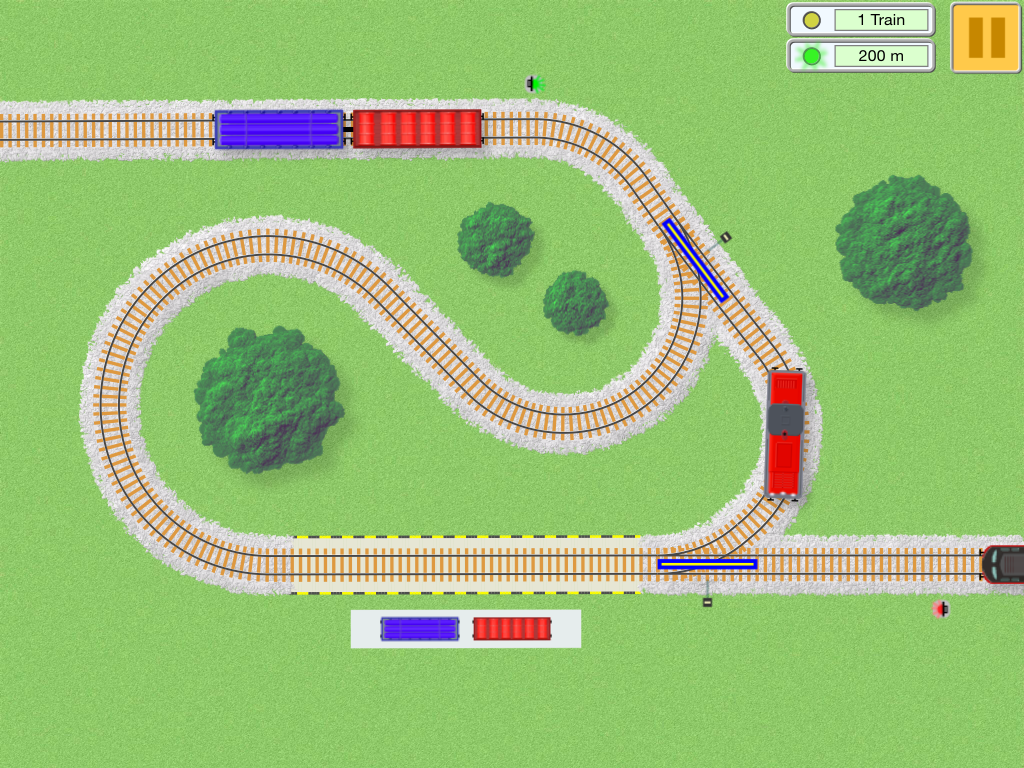 It goes without saying that you can operate the switches; the blue outlines indicate the area that must not be occupied by a wagon in order to let the switch toggle.

The care that has been put in the movement of the wagons is apparent. They closely follow the tracks and move very smoothly. Perhaps even too smoothly, as there is a certain amount of inertia that can make it difficult to move precisely.

An interesting twist is that there can be more than one train to put together. Here you have a green and a red wagon, but you must form a train with green and blue wagons. 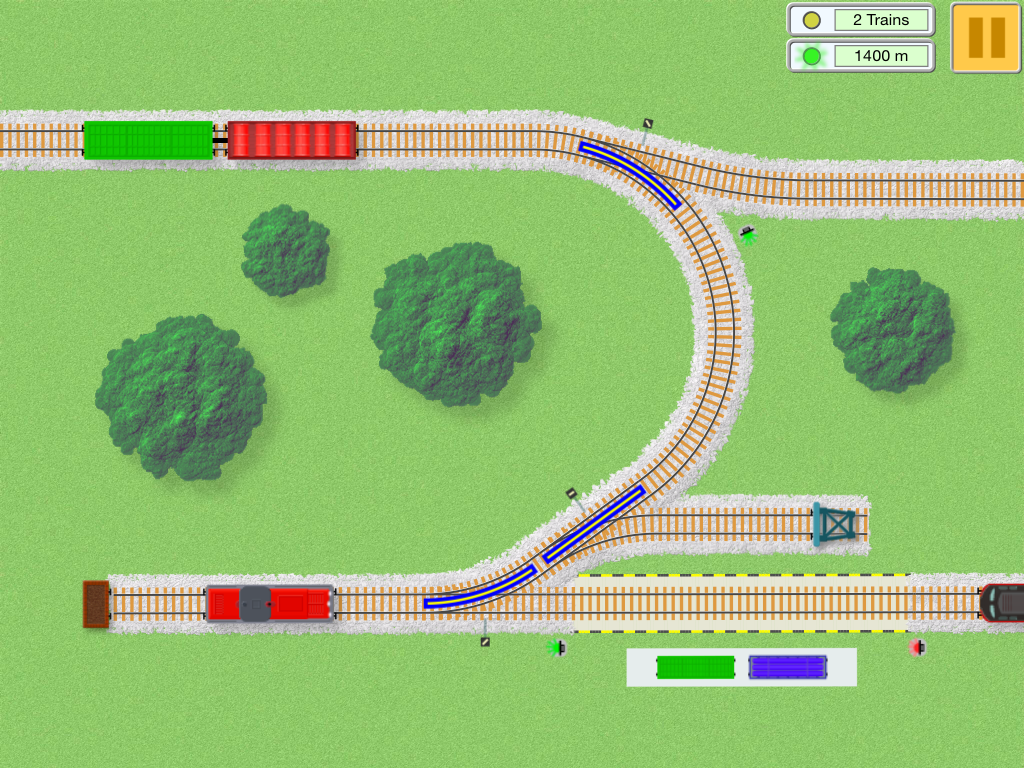 What will happen is that after you take those two wagons away from the top section of track, another train will arrive bringing two more wagons.

Your solutions are measured by the total distance travelled by the engine, and you are challenged to take that below a given value. This is a deeper challenge than it might seem at first sight. The following puzzle, for example, had me stumped for a while. 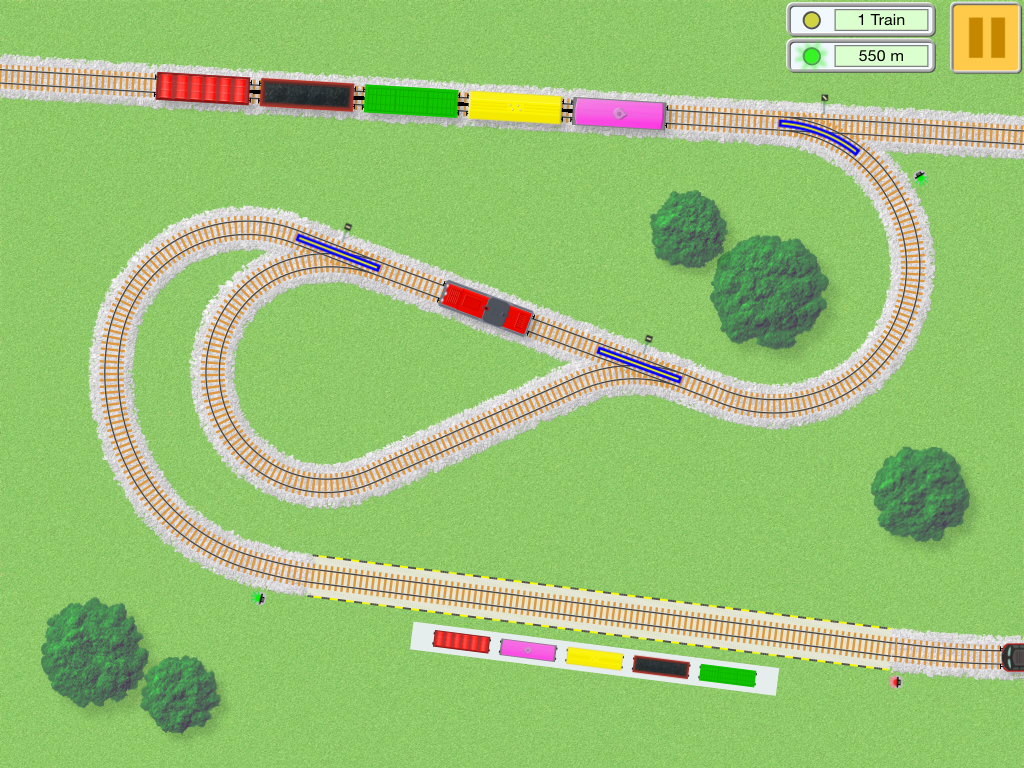 Solving it was a piece of cake, but my first attempt was well over 1km, with the target being only 550m. After many attempts, I was convinced that I had optimized my solution as much as possible, but I was still over the target by a few meters. It just seemed impossible.

Eventually, I had an a-ha! moment and figured it out. 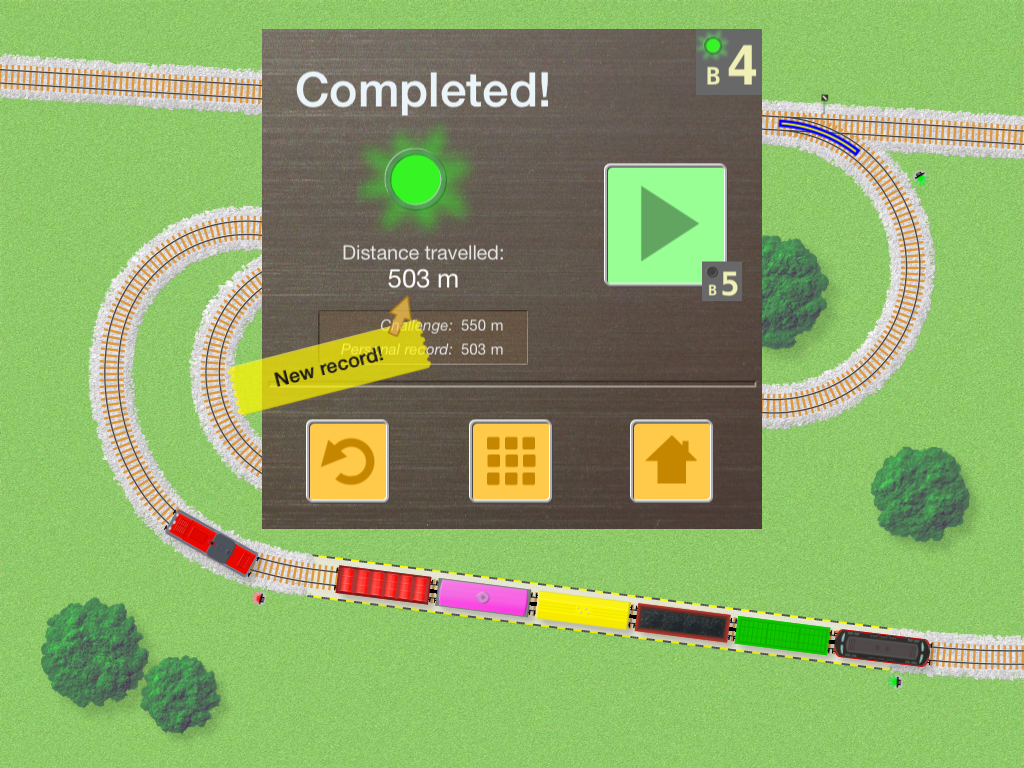 I'm not an expert of shunting puzzles, so I had to invent my strategies, and solving this puzzle made me feel smart. That's what I'm looking for in puzzle games: apparently simple challenges, that however require a significant, conscious effort to be mastered.

The game contains 36 puzzles, which must be played strictly in order. Currently I've done a bit less than half of them, and finding a non-optimal solution was reasonably simple even for an uninitiated like myself. Judging from the screenshots on the App Store, however, difficulty will significantly ramp up as the game progresses.

Apart from bridges and tunnels, which should just be cosmetical, I'm curious about the
humps that the App Store description talks about. It looks like those will allow the wagons to be moved by gravity while the engine is somewhere else. Should be fun.

The one thing I don't like about this game is that to get the shortest distance you need not only to find an optimal sequence of moves, but also to implement it with pixel perfect accuracy, fighting with the inertia of the simulation. This can be repetitive and frustrating. However, that's a fair choice, and fits well with the realistic simulation feel of the game.

What definitely should be added, however, is Game Center support! I'd like to compare my scores with the ones of other players.


©2014 Nicola Salmoria. Unauthorized use and/or duplication without express and written permission is strictly prohibited. Excerpts and links may be used, provided that full and clear credit is given to Nicola Salmoria and nontrivialgames.blogspot.com with appropriate and specific direction to the original content.
Posted by Nicola at 4:20 PM