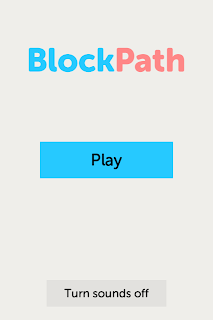 The puzzle concept is not entirely new, but the implementation in this case is excellent, making the game very enjoyable to play.

You start with a grid mostly empty, except for one blue and a few red cells. Your goal is to draw a continuous path starting from the blue cell and passing through all the cells except for the red ones. 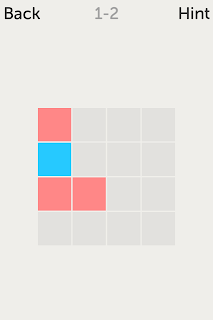 For example, the solution of the above puzzle would be this one. 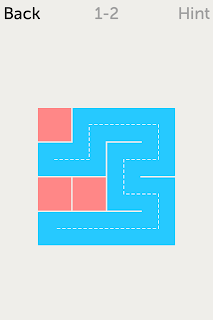 Surprisingly, even when the grid size increases, every puzzle has a unique solution. I think the largest
size is 6x8, which is perfect for the iPhone screen size.

I haven't found previous instances of the exact rules used by this game.
The 21st World Puzzle Championship featured a very similar puzzle called Simple Loop, with the only difference that the path had to form a closed loop. See page 5 of the instruction booklet.

The lack of explicit clues makes these puzzles simple and elegant, in a way similar to Monorail, which is another favorite of mine.

If I were to solve these puzzles with pen and paper, I'd draw parts of the path all around the grid in random order, as logic deductions made me to exclude other possibilities. BlockPath doesn't allow to do that, because you must draw the path from beginning to end, but this isn't a problem; it just means you have to use visual intuition more than strict logic deductions. If you make a mistake you can restart from any point, so the game is not frustrating.

Both the Free and Pro versions have a total of 175 puzzles, split across 5 worlds of 35 puzzles each; the puzzles are different in the two versions.
The puzzles in each world must be played in sequence; the Pro version has all worlds unlocked, while in the Free version each world after the first must be bought individually using in-app purchases.

The technical implementation of the in-app purchases is actually the worst part of this game, because it is very slow and there is no visual indication that the request is being processed. It took me a lot of perseverance to successfully complete the purchases; other users might not have the same patience.

Another minor problem I had with the user interface is that frequently the swipe used to move between worlds was misinterpeted as a tap to select a puzzle. But that's just a nuisance; the puzzle solving interface is rock solid.

Definitely try out this game; it's relaxing and almost hypnotic in its simplicity. Just grab the free version, and if you like it, avoid the in-app purchases and simply buy the Pro version.


©2013 Nicola Salmoria. Unauthorized use and/or duplication without express and written permission is strictly prohibited. Excerpts and links may be used, provided that full and clear credit is given to Nicola Salmoria and nontrivialgames.blogspot.com with appropriate and specific direction to the original content.
Posted by Nicola at 10:07 PM