Review: Niño for iPhone and iPad

Niño by Lennard Meijer, Reinder Nijhoff, and Peter Kortenhoeven is a nice turn-based strategy game which can be pretty challenging. 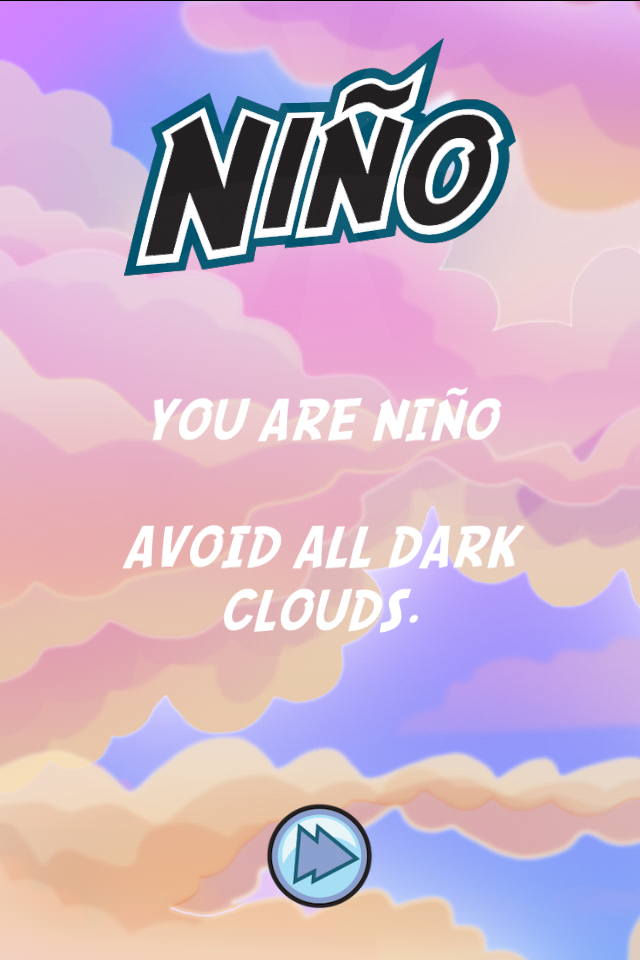 The movement rules are simple but they don't get boring because there are many different elements—maybe even too many.

You are the blue cloud. You have to move through the board and reach the exit at the top of the screen without being captured by the red clouds. 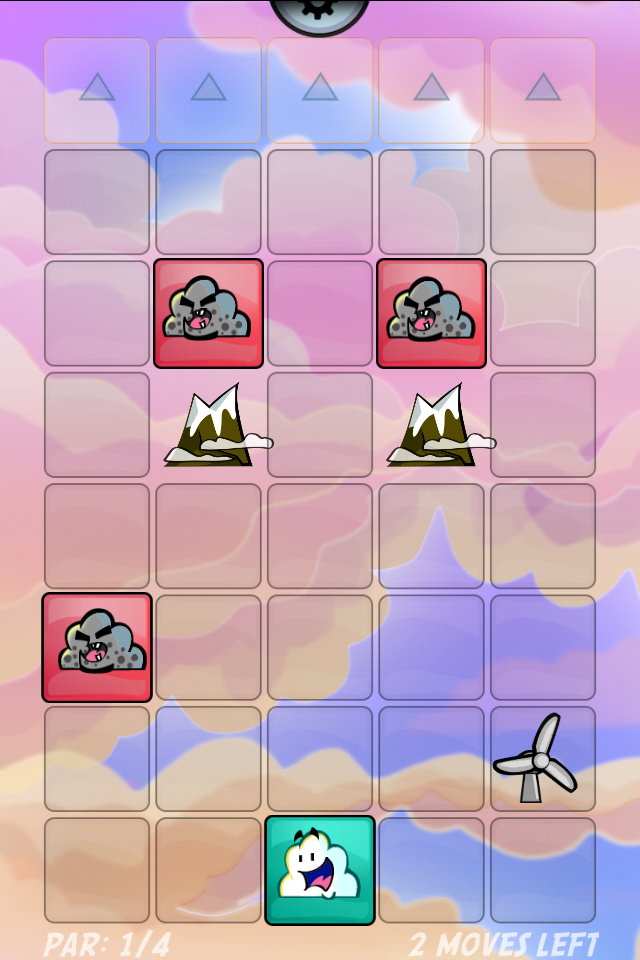 The game is turn based, so you make a move, then the red clouds make a move. Your move consists of two steps in any direction, including diagonally and a mix of different directions. The red clouds move by only one step, so they are slower than you, but there are a lot of them.

The mountains and windmill you can see in the picture are the most common elements, at least initially. Mountains are simply obstacles: squares that cannot be visited. Windmills grant you an extra step when you pass over them. Beware! The red clouds can benefit from the same boost, something which will give you many headaches in the later puzzles.

The red cloud movement logic is simple and deterministic, though not explicitly described. They just move towards you, but in some cases there are multiple ways to do so, and learning the exact direction they will take is crucial.

There are many other elements that you get to play with.
Factories destroy any cloud that passes over them. Good if it's a red cloud, but very bad for you. 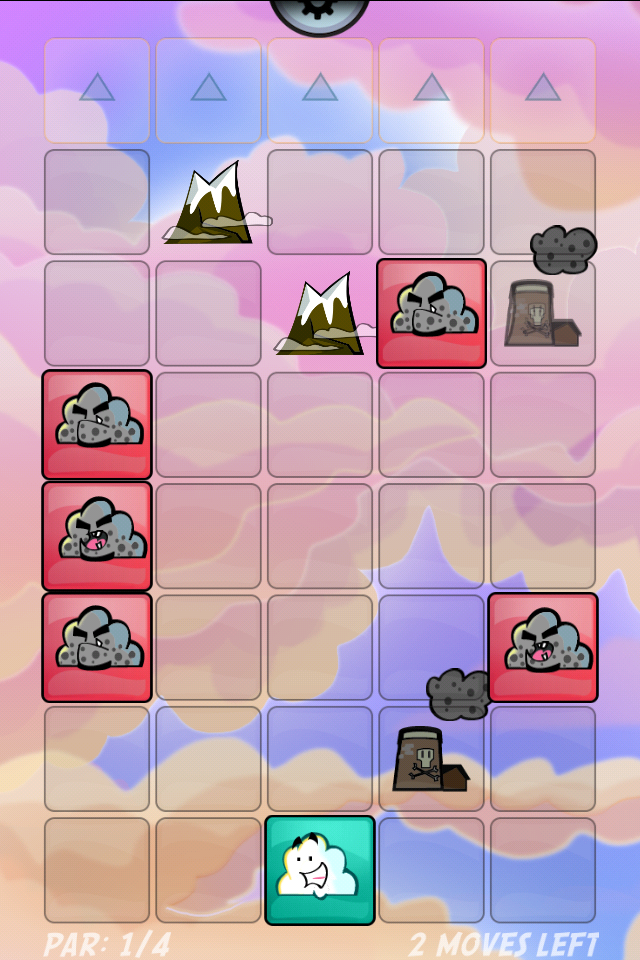 Weddings will make you lose if any cloud passes over them, so not only you must avoid them, but you must also keep the red clouds away. I think this was a nice humorous touch. 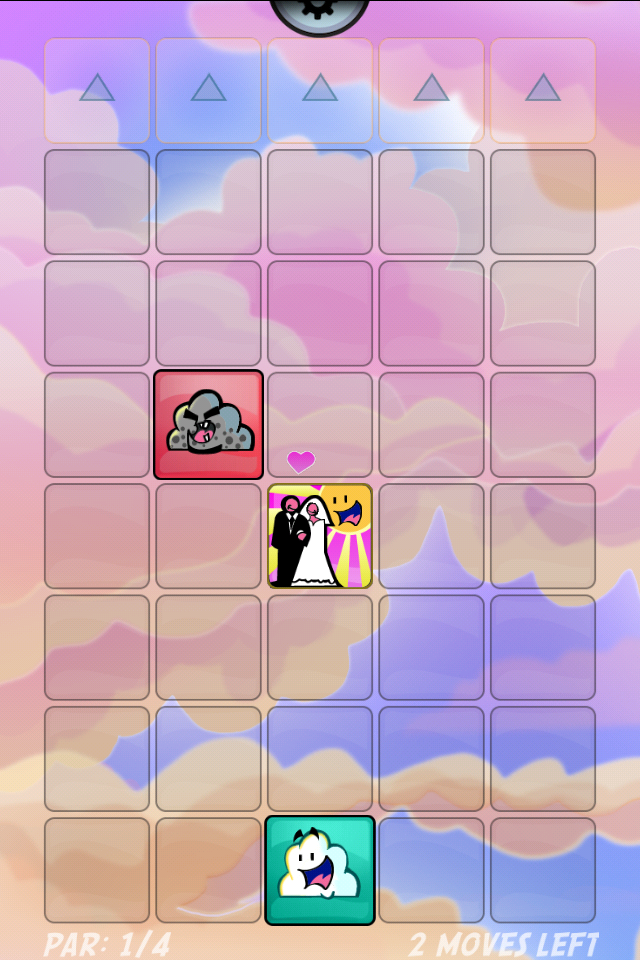 The controls work well after you get used to them. Intuitively, you might want to drag your tile to where you want it to go, but instead you just need to tap the destination square. Dragging does work, but there is no visual feedback and it's occasionally inaccurate, so better not do it.

In some cases you also might not want to move by 2 steps. To end the turn early, just double tap your cloud. This is explained at the very beginning but isn't actually needed for a few levels, so eventually I forgot about it. Then, for no apparent reason, it is explained again in the last puzzle of the first episode—after I would have needed it so many times!

Solving these puzzles is quite fun. The solution always boils down to taking advantage of your higher speed, so you want to make your enemies move in one direction and then whizz past them on the other side. Many puzzles are easily solved that way, but become harder if you want to match the optimal number of moves indicated by the game. In a few cases, however, the puzzles are just hard, even if you take your time. I found this one particularly difficult: 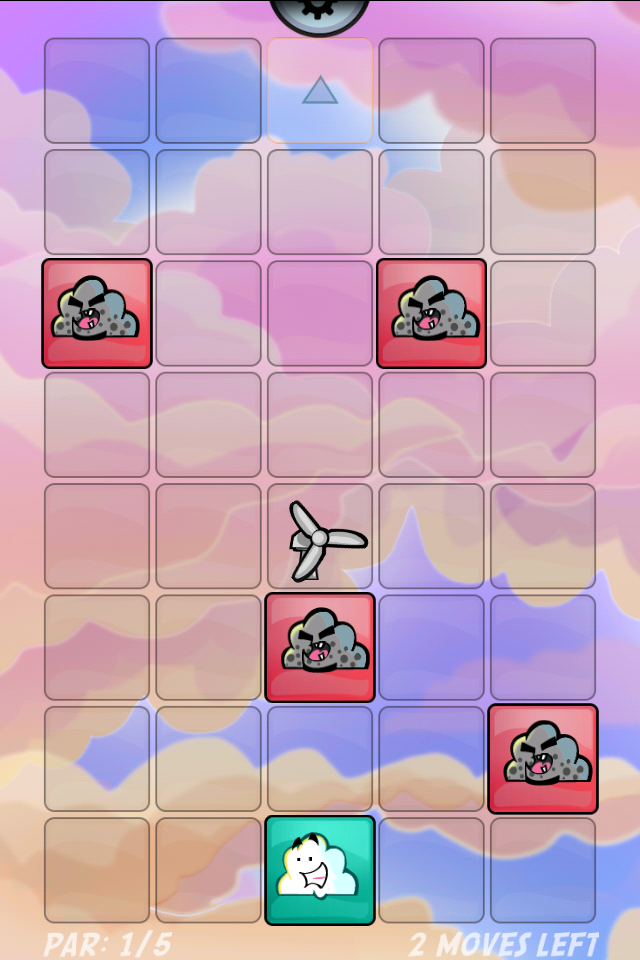 One minor annoyance is that as you need to replay a puzzle multiple times, you'll often make a move and immediately want to restart. This requires two taps instead of one, because the restart button is hidden inside the pause menu. I'd surely have appreciated a restart button on the main screen.

I guess nobody these days can do without teleports. I'm not fond of them in this particular case, but they do introduce an interesting strategic twist as you can either lure the red clouds to one side and then teleport to the other side, or simply make a red cloud enter into the portal to open up your way to the exit. But be aware that the portals often are just decoys, and you don't need to use them at all to solve a puzzle. Also note that portals only work if your move ends on them. If you land on them with your first step, you pass just through them. 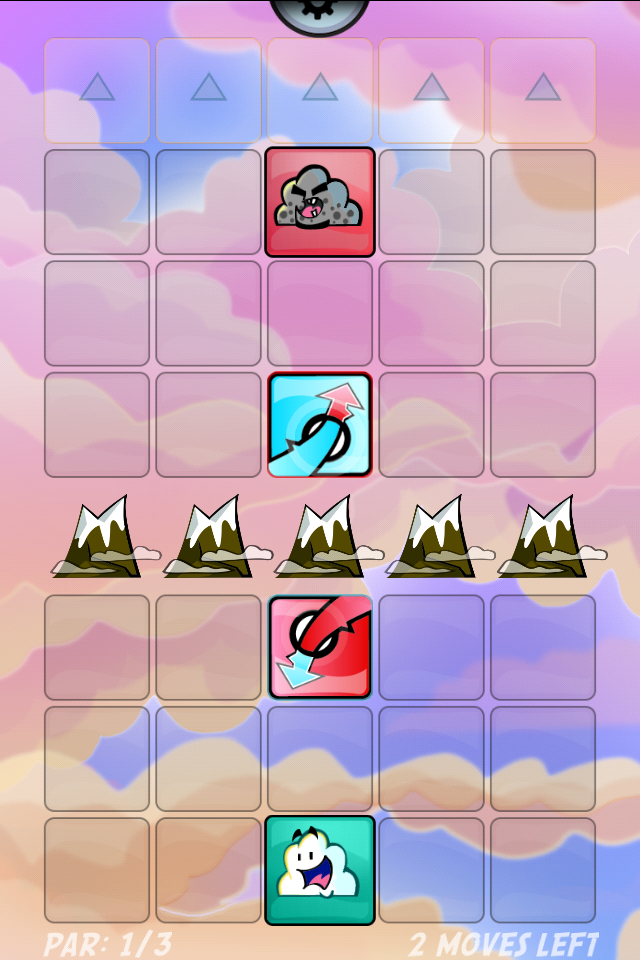 My main criticism is that the game throws too many different things at the player in a relatively short time, making it feel a bit messy. This is particularly obvious with the faster clouds, which move two steps at a time. They are introduced in one puzzle and then never seen again for a long time. 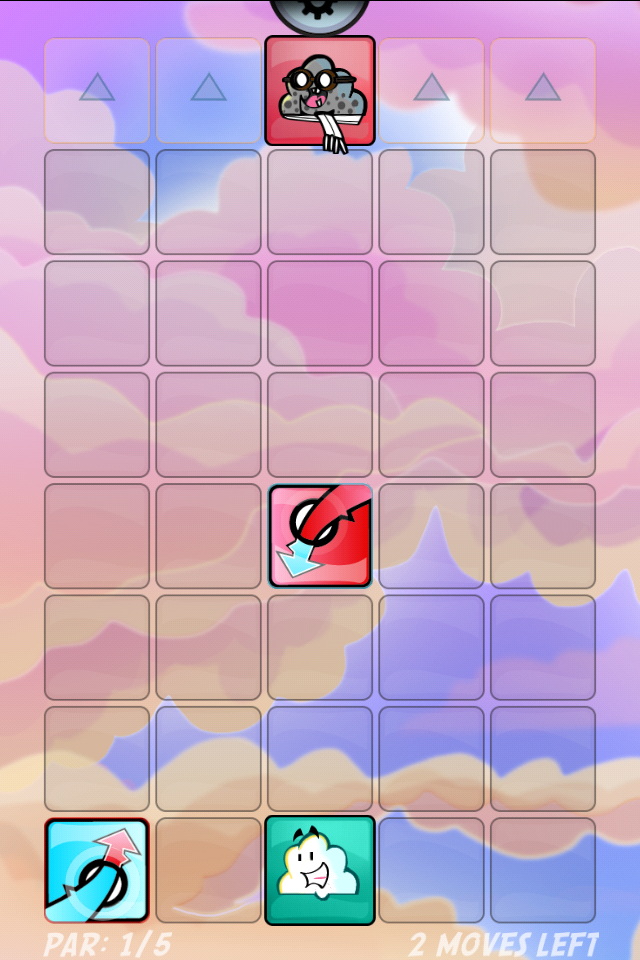 Also there are clouds which can pass over factories without being destroyed: 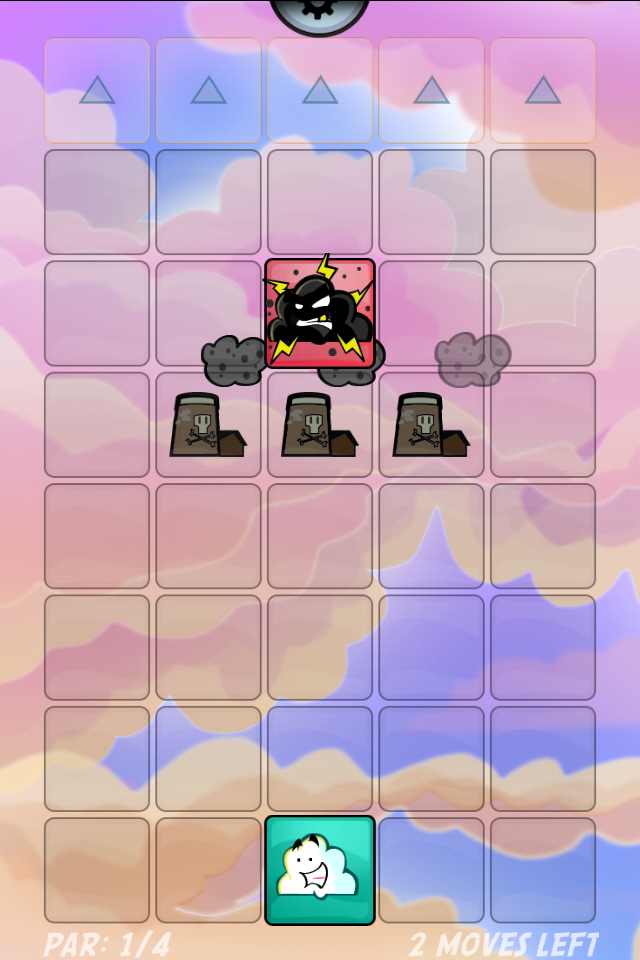 There are also elements that require combined actions. Here you need to first pass over the sea to pick up water, then pass over the thirsty flower. That opens the exit. It's an interesting mechanic, but feels a bit contrieved. 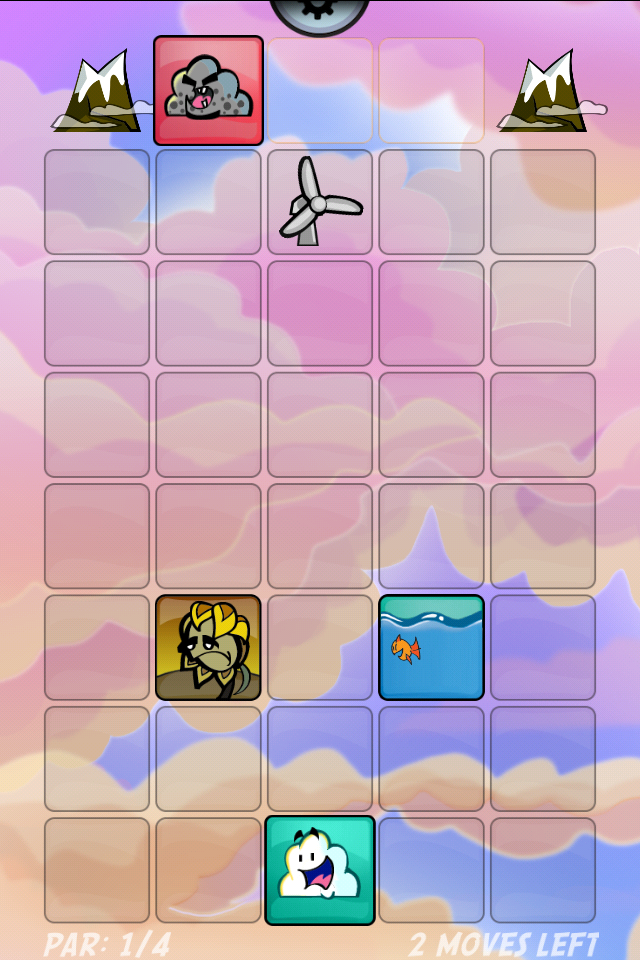 The trickiest element could be the electric grids. You need to get a red cloud over the solar panel at the right time to power off the grid and be able to pass through it. 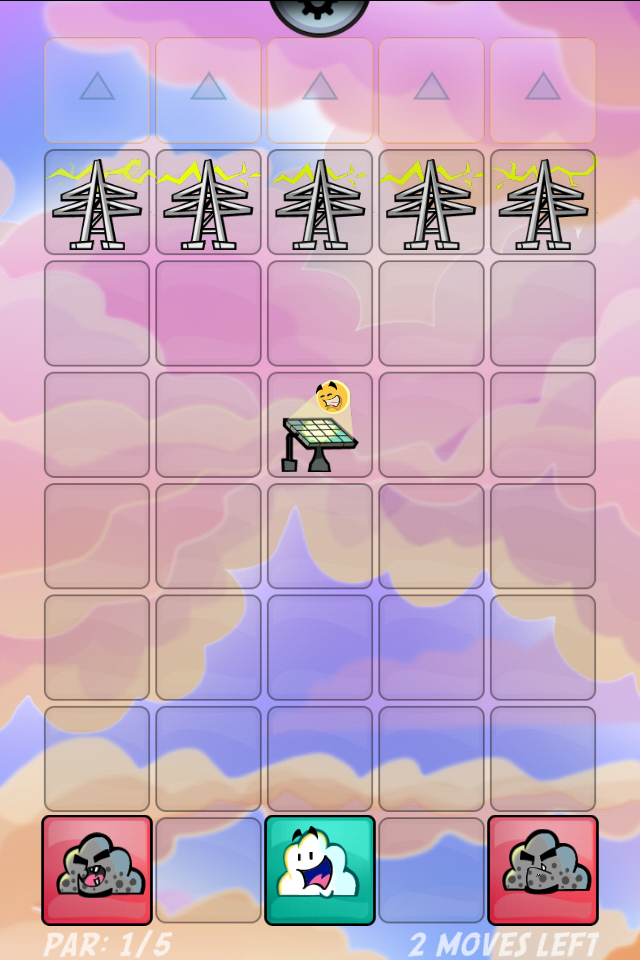 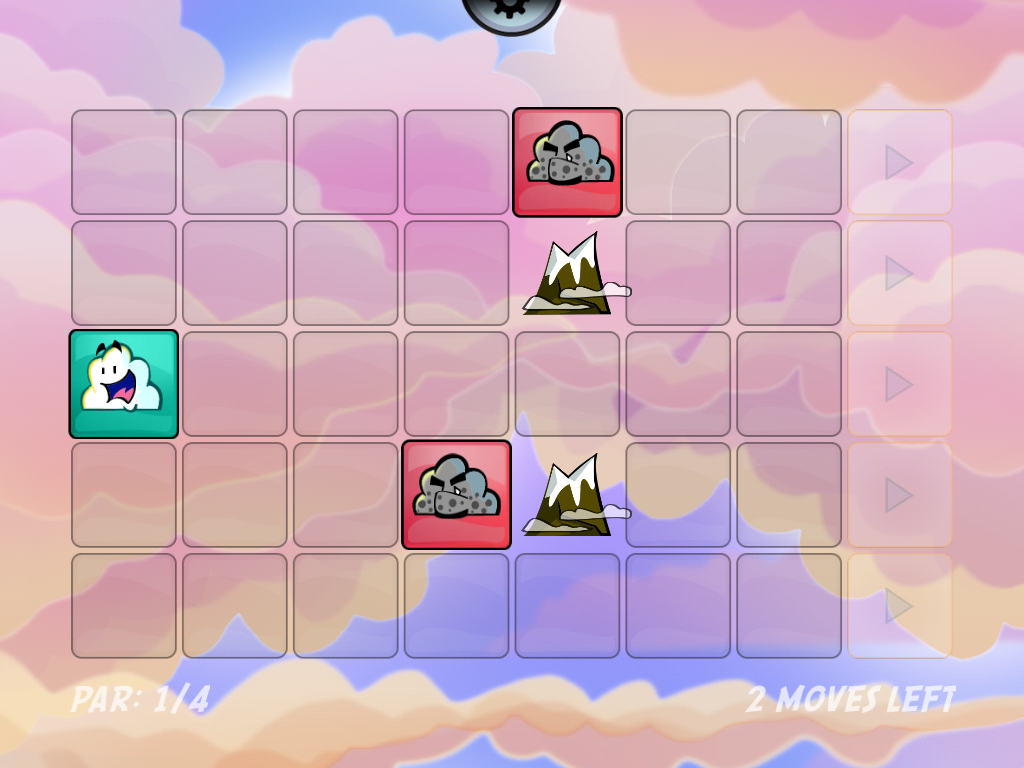 There's a total of 200 puzzles split in 5 episodes, and they all seem to be available for free, though you need to unlock them in order. There is a single in-app purchase whose only effect seems to be to remove the (somewhat annoying) full screen ads.

Game Center is supported, though only under iOS 7 for some reason, and there is no in-game button to see the leaderboards.

This game is fun and free, so definitely give it a try.


©2014 Nicola Salmoria. Unauthorized use and/or duplication without express and written permission is strictly prohibited. Excerpts and links may be used, provided that full and clear credit is given to Nicola Salmoria and nontrivialgames.blogspot.com with appropriate and specific direction to the original content.
Posted by Unknown at 12:49 PM